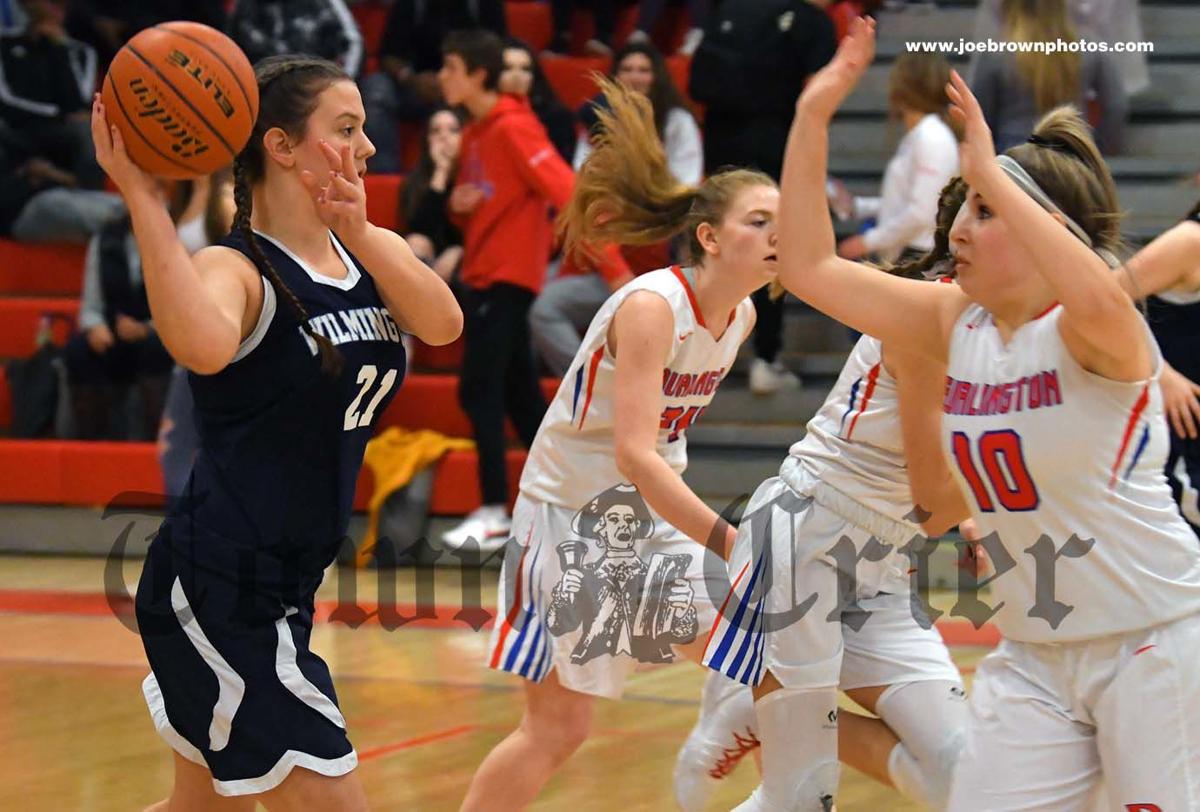 Wilmington High senior Olivia Almeida looks to make a pass for the Varsity Girls Basketball team during an earlier season game against Burlington.     (photo by JoeBrownphotos.com).

Wilmington High senior Olivia Almeida looks to make a pass for the Varsity Girls Basketball team during an earlier season game against Burlington.     (photo by JoeBrownphotos.com).

WILMINGTON – It has been a rough start to the season for the Wilmington High Girls Basketball team, who entered las Friday night’s game with Stoneham with an 0-3 record, while still looking to meet the high expectations they had heading into the season.

Nobody knows what the future will hold for this Wildcats squad, but on Friday night they certainly looked like a team headed in the right direction, dominating their opponents on their way to at 53-36 win for their first victory of the season.

While there is still work to be done, Wildcats coach Jessica Robinson was pleased to see her team’s improved play compared to the first three games of the season.

“We had some good spurts, for sure,” Robinson said. “We put together a little bit more of a game today than we had in the previous three.”

The Wildcats got outstanding efforts throughout their lineup to pick up the win, led by junior Kylie DuCharme, who had 18 points, 18 rebounds, six steals and four assists while senior guard Jenna Tavanese also had a terrific performance with 14 points, five assists and seven steals. Junior guard Jenna Sweeney chipped in with five points and had an impressive seven steals.

“Kylie is a great player and when she is playing confident, watch out,” Robinson said. “There are not many people that are going to be able to contain her. The whole team did a good job out of our transition offense and Kylie and Jenna were able to find the open people.”

After a tightly contested first quarter which saw the Wildcats take an 11-9 lead after the first eight minutes, Wilmington dominated the rest of the way, extending their lead to 11 points at the half and 18 points at the end of three quarters before settling for the 17-point win.

Tied 11-11 in the early stages of the second quarter, the Wildcats went on a 9-0 run behind the efforts of DuCharme, Tavanese and Sweeney to extend their lead to 20-11.

Tavanese got the scoring started with a pair of hoops after great outlet passes from DuCharme, before DuCharme did the job herself shortly thereafter, with a hoop to make the score 18-11.

Moments later, Sweeney capped the run with a basket off a steal of a Stoneham inbounds pass with 3:10 left in the half.

The Wildcats maintained their comfortable lead throughout the rest of the half, heading to the break with a 25-14 advantage.

Wilmington continued their dominance in the third quarter, scoring right out of the gate with a three pointer by senior Olivia Almeida and extending their lead from there, seeing it reach as many 17 points at 35-18 on a hoop by sophomore Rita Roche with 2:20 left in the quarter, before the Wildcats eventually led 39-21 at the end of three thanks to a late basket by junior Kayla Smith.

Wilmington appeared to have the game well in hand at that point, but Stoneham refused to quit, outscoring the Wildcats by a 12-2 margin to start the fourth quarter to close within 41-33 with 4:58 left in the game, prompting Robinson to call a timeout so her team could regroup.

And regroup they did, going on a 12-0 run of their own, led by DuCharme, who had eight of the 12 points during the run, while Anne Wingate and Tavanese provided the other points.

“We came out of the timeout and we responded on defense,” Robinson said. “And defense was really the difference in the game. We did struggle again finishing, but our defense was what allowed us to pull away.”

All in all it added up to a very satisfying victory for the Wildcats, who will now turn their attention to the rest of their schedule where they hope to put a winning streak together.

“We wanted that first win, and now that we have it, we are hoping to continue to get better and fight for qualification for the tournament,” Robinson said.

The Wildcats took another step towards qualifying for the post season on Tuesday night when they pulled out a dramatic 43-41 road win over Reading to improve to 2-3 on the season.

Ducharme and Tavanese once again led the way for Wilmington, with Ducharme scoring 20 points while grabbing 18 rebounds. Tavanese meanwhile had 16 points and five steals.

Despite their great performance, however, the game still hung in the balance in the closing seconds, with the Wildcats clinging to a slim 40-38 lead with 9.5 seconds left when Annie Wingate calmly stepped to the line and knocked down a pair of free throws to make it 42-38.

Reading came back with a quick three pointer to make the score 42-41 with 2.1 seconds left and then sent Tavanese to the free throw line. The senior captain knocked down one of two free throws and Ducharme grabbed the rebound of the miss on the second shot to seal the win.

Jenna Sweeney played great defense for the Wildcats against Reading sharp shooter Jackie Malley, holding her to two points in the second half after she went off for 13 in the first half.

Wilmington will be home for its next two games with Watertown on Friday night at 7:00 pm and then Winchester on Tuesday starting at 5:30 pm.