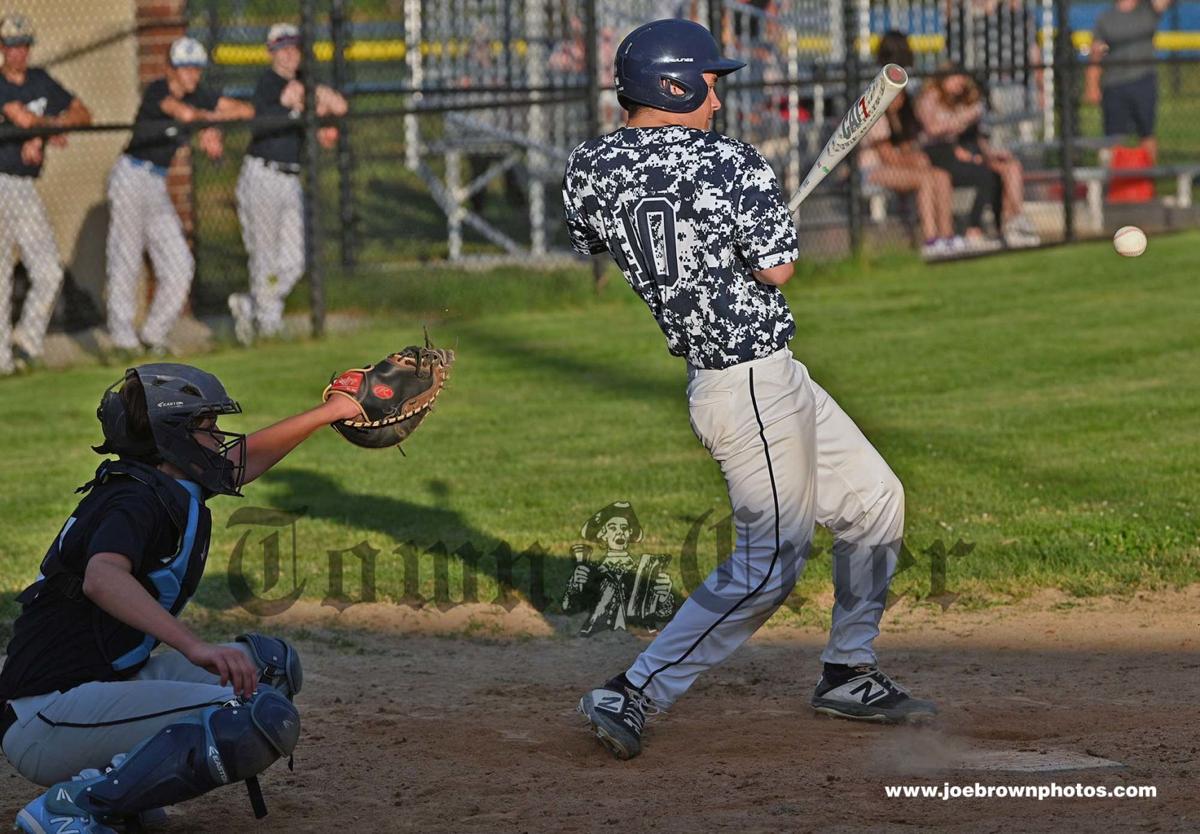 On Tuesday night, actual live sports was back at Wilmington as the Northeast Baseball team opened the season up against Dracut and came away with a 6-2 victory held at Scanlon Field. Marcello Misuraca fouls one off during one of his at-bats. (photo by JoeBrownphotos.com). 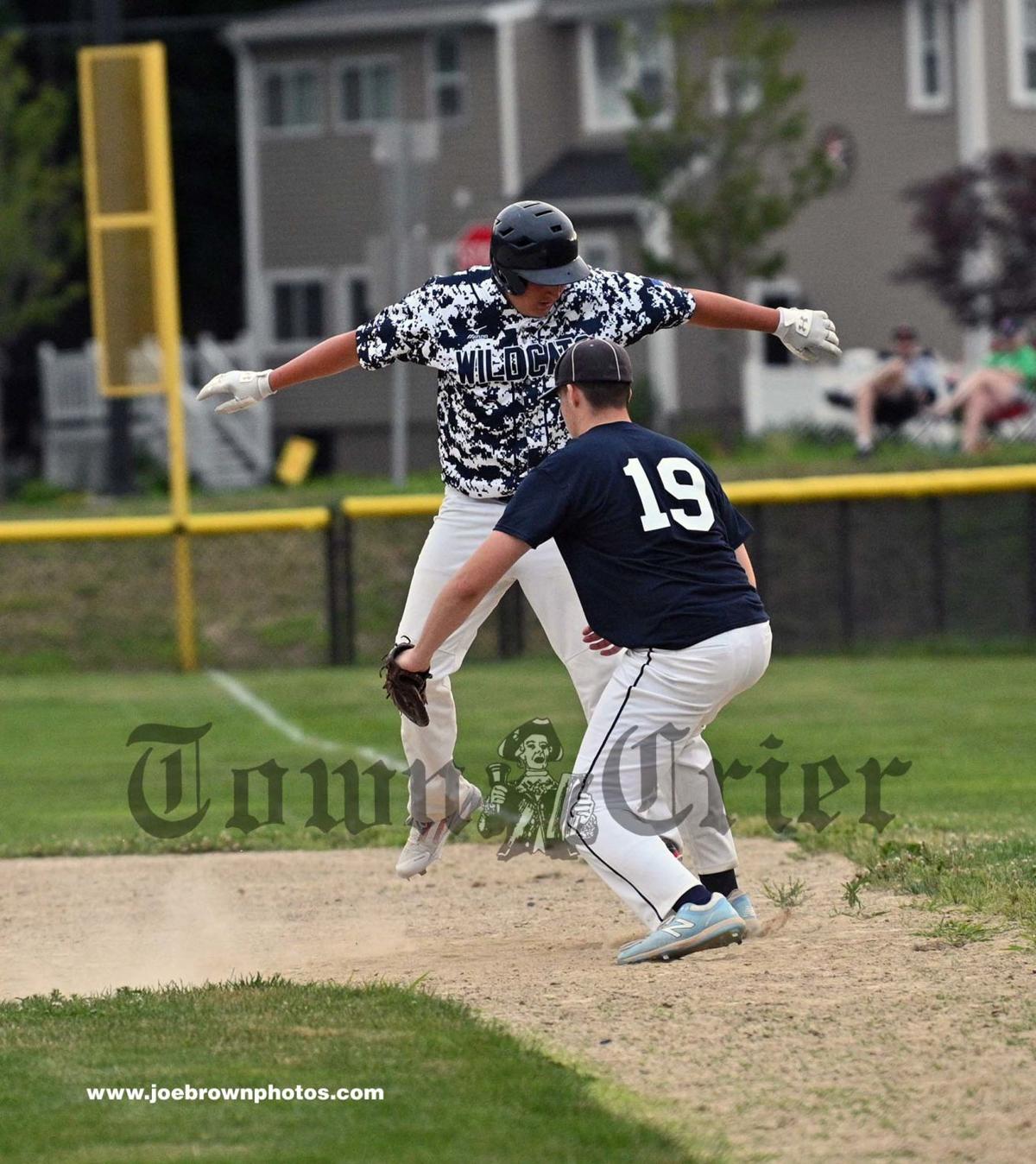 Wilmington Northeast player Vinnie Scalfani gets back to first base and tries to avoid a tag from Dracut’s Kyle Mackay on a pick-off attempt during Tuesday night’s game held at Scanlon Field. (photo by JoeBrownphotos.com). 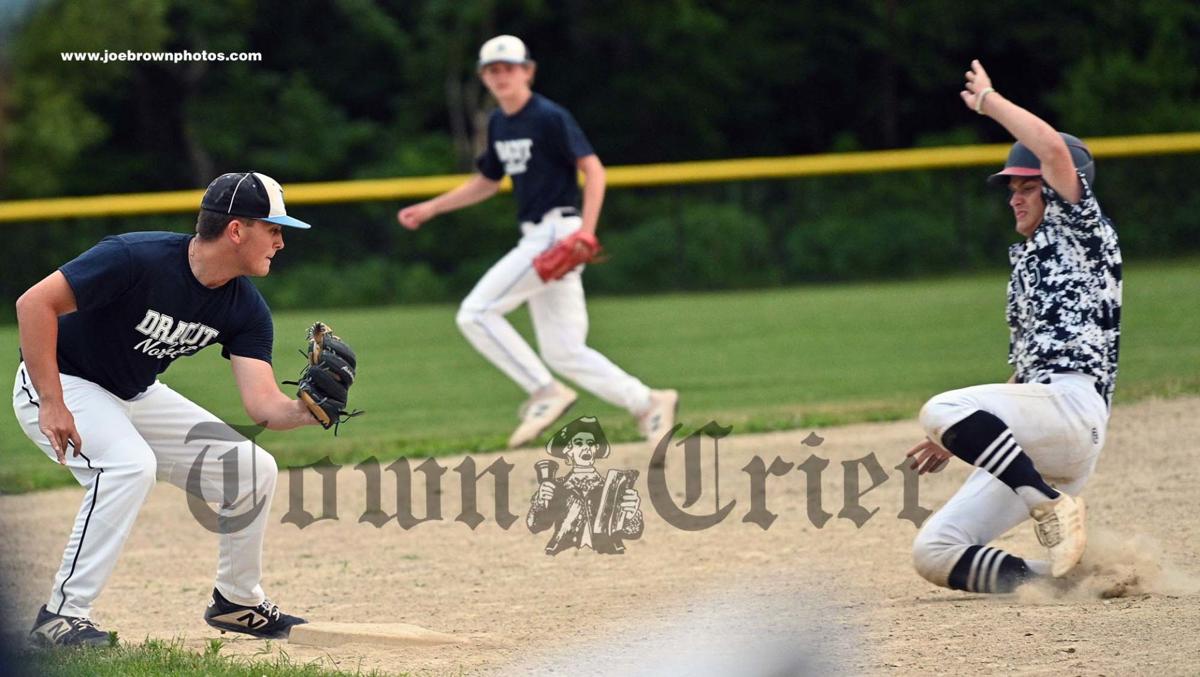 On Tuesday night, actual live sports was back at Wilmington as the Northeast Baseball team opened the season up against Dracut and came away with a 6-2 victory held at Scanlon Field. Marcello Misuraca fouls one off during one of his at-bats. (photo by JoeBrownphotos.com).

Wilmington Northeast player Vinnie Scalfani gets back to first base and tries to avoid a tag from Dracut’s Kyle Mackay on a pick-off attempt during Tuesday night’s game held at Scanlon Field. (photo by JoeBrownphotos.com).

WILMINGTON — Good things come to those who wait as the old adage says. And wait they did, for organized sports to return to area playing fields after a hiatus prompted by the ongoing threat of this historic pandemic.

All agreed it was a welcome sight to see the players take the field at Scanlon and for scores of Wilmington spectators gathered to enjoy the first of an abbreviated, seven-game season, a win was a bonus.

On the strength of a dominating pitching performance from Joey Dynan, coupled with a breakout third-inning offensively, the Northeast Wilmington baseball team opened with a convincing 6-2 win over Dracut on Tuesday evening.

Trailing by a pair of runs through the early frames, Wilmington rendered two-out damage in the third, scoring three to assume the lead and never looked back.

As expected, the typical baseball format was adjusted to allow for social distancing. For instance, the umpire who would normally take his position behind home plate was instead, calling balls and strikes from a vantage point adjacent to the mound. To their credit, the strike zone was fairly consistent but there was a pair of occasions when a close play at third base was determined from some distance. Both teams earned kudos for their patience with the officials, who were handcuffed by league protocol.

“At first, I was concerned about that — I wasn’t sure how well he would be able to see the ball,” said Wilmington coach Phil Fenton. “It was quite different and I did ask the umpire about it and he agreed that it was different. It was awkward but we did what we had to do to resume playing baseball.”

Joey Dynan, who was called upon to pitch long relief after starter Harry Serounian departed with a tender arm, agreed with his coach.

“It didn’t really impact me,” said Dynan, when asked how it was to pitch with the umpire behind the mound. “There were maybe one or two questionable calls but you would expect even more than that when the umpire is behind the plate so I think they did a decent job.”

Serounian struggled with his control at the outset and issued back-to-back walks to the first two Dracut batters he faced. Leadoff man Anthony Fazio eventually scored on a two-out basehit from Kyle Mackay. Serounian got out of the inning, stranding a pair in scoring position, but as he retreated to the dugout, he seemed to be favoring his throwing arm.

Slugger Nico Piazza led off the Wilmington season and put a charge in one to deep center only to be robbed on Danny Robichaud’s diving grab. Dracut starter Pat Crowley had decent stuff and quickly retired the side, striking out Tristan Ciampa and Brendon George.

Dynan was hurling in mid-season form as he struck out the side in the second and fifth innings. In all, he fanned a dozen batters and yielded just a pair of hits in six innings worked.

“I think he got stronger as the game went on,” Fenton said. “There was an inning where he slowed down a little bit but then he picked it right back up and did a great job for us.”

“Luckily, in practice, we’ve been doing live pitching so I’ve been able to get lots of reps,” explained Dynan. “I was scheduled to start the third game but I figured I might as well treat it as if I was starting this game and it worked out. My catchers Nico (Piazza) and Marcello (Misuraca) were both calling a great game tonight.”

Dracut doubled its lead to 2-0 on an unearned run in the third. Fazio walked, stole second, and rounded the bases on subsequent ground ball outs. But when Wilmington came up in the bottom of the inning, there was a decided momentum shift.

Garrett Moretto reached on a slow grounder to short but was later gunned down at first by Crowley, who erased the baserunner with a surgical throw. But the Dracut pitcher’s heroics were soon overshadowed. With two outs in hand, he issued a walk to Jimmy McCarron, a basehit to Piazza, and then back-to-back doubles to Ciampa and George. All but George would score. When the dust settled on the infield, Wilmington had surged ahead, 3-2, and Crowley finished his night on the bench.

“Their pitcher really shut us down in the first two but then we started to chip away and moved into the lead,” Fenton said.

Dracut threatened in the fourth, putting a couple in scoring position off Dynan walks and a passed ball but the pitcher regained his composure and put down the insurgence, striking out a pair to escape the inning.

There was certainly no rust in the Wilmington defense, particularly left fielder McCarron, who earned a rousing cheer from teammates and spectators alike for the spectacular diving catch in the sixth to delete what would have been an extra basehit.

Wilmington batted around the order in the bottom of the sixth, adding a trio of insurance runs to put it away. George, who was left on base in the busy third, crossed the plate to make it 4-2. He was later followed by Vinny Scalfani and Tyler Fenton.

“I think they got to us twice last year so beating Dracut was nice,” said coach Fenton, who will host this same opponent on Thursday evening. “It’s great to be playing baseball again. I think the kids had some fun out there which is what it’s all about.”

Wilmington Little League’s season was slated to start on Monday but those games were cancelled before Governor Baker’s ruling, therefore the season will begin on Wednesday, July 8th with games at both Rotary Park and the Boutwell School.

While the LL season starts Wednesday, the Lou Tompkins team will also have its first home game on Wednesday. We will have full reports on these games (with full cooperation of the weather) in next week’s edition.