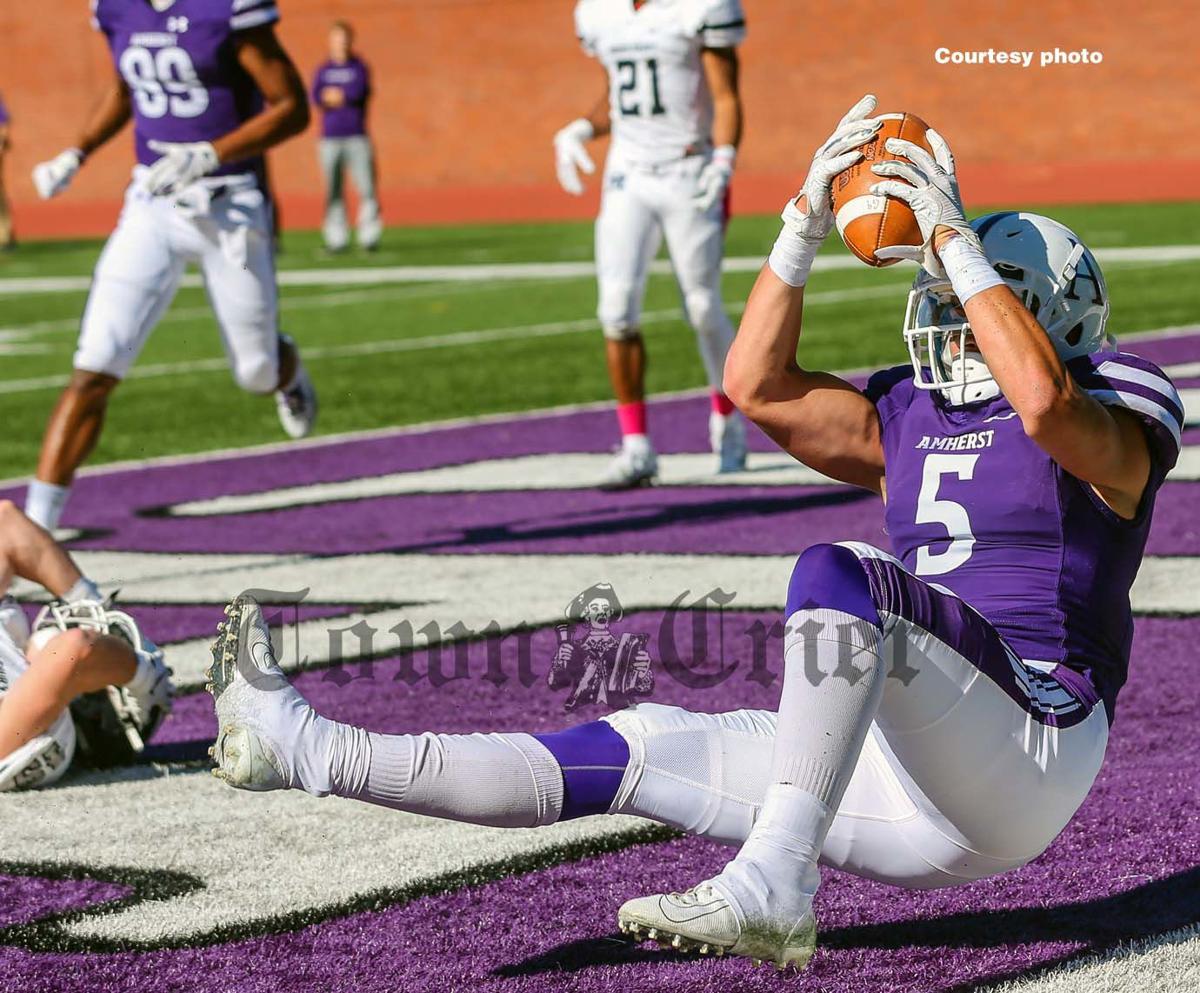 Wilmington resident James O’Regan has had a remarkable career as a wide receiver on the Amherst College Football team. Shown here making a catch for a touchdown, O’Regan is closing in on several school records and has two games left in his career.     (courtesy photo/Amherst College). 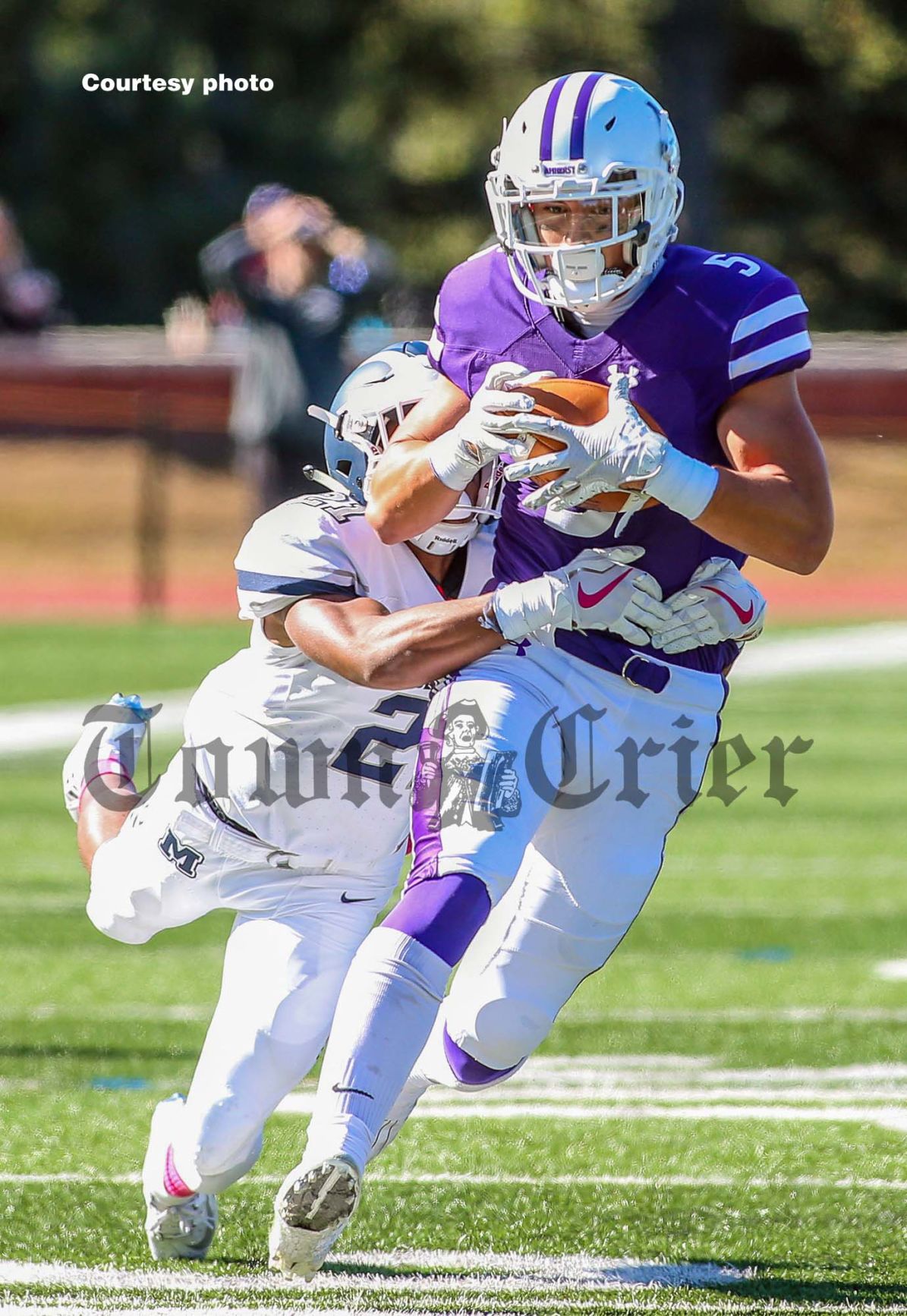 Wilmington resident James O’Regan has had a remarkable career as a wide receiver on the Amherst College Football team. Shown here making a catch for a touchdown, O’Regan is closing in on several school records and has two games left in his career.     (courtesy photo/Amherst College).

AMHERST – Amherst College Football coach EJ Mills has been in the game long enough to know a great football player when he sees one.

And when the veteran coach, who has been the Amherst head coach for the past 22 years, was recruiting Wilmington native James O’Regan back in 2015, he knew he was looking at a special player.

After all, in his two years at Buckingham, Browne and Nichols after transferring from Wilmington High School after his sophomore year, O’Regan had put up some truly remarkable numbers at wide receiver. During his senior year he scored 17 touchdowns and had 57 catches for 1,126 yards in just eight games.

O’Regan is closing in on some all-time records at Amherst. With two games left in his college career, has at least an outside shot of breaking the all-time records for receptions and receiving yards. He currently has 124 career receptions, leaving him 19 shy of the Amherst record of 143, and he has 1,984 receiving yards, leaving him 352 short of the all-time mark of 2,336. He also has 16 career touchdown catches.

While it is unlikely he will break those records, with some of the games O’Regan has put together in his career for the Mammoths, it is certainly not out of the realm of possibility, exceeding even Mills big expectations for him.

“I thought we had a good one,” Mills recalled of his recruiting of O’Regan. “He came to our campus for a visit, but I thought we might lose him to one of the Ivy League schools. But we knew if he came to us he would have a chance to be very impactful, and he definitely has been. This is a kid who just loves football, loves every aspect of it, and that is why he became one of the best of all time. That, and he is a very talented kid.”

That talent has led O’Regan to a senior season where he has 39 catches for 647 yards and six touchdowns, all of which easily lead the team. He has already equaled his reception total from last season, while exceeding last year’s yardage total (547) and touchdown total (4), all while helping to lead the Mammoths to a 4-3 record, which could be a lot better if not for three losses by a single field goal, including two in double overtime.

O’Regan has improved every year he has been at Amherst, and he credits a big part of his success to his connection with senior quarterback Ollie Eberth, an Andover native and a graduate of St. John’s Prep.

“Ollie and I have a great relationship. He is one of my roommates and one of my best friends, and he lives in Andover, so we are able to work together a lot in the off season,” O’Regan said. “We have a great chemistry. We always know what the other is doing. As senior leaders we knew we had to step up this season, especially after we lost some guys from last season.”

While Mills and the other coaches have gotten even more than they expected from O’Regan, he has also gotten more out of college football than he ever could have imagined when he committed to Amherst.

“I love football. I love everything about it, so to be able to play in college has been amazing. I know I am definitely going to miss it when it is gone,” O’Regan said. “I love playing on Saturday, I love going to practice and just being with the guys. It has been a really special time for me.”

It has been a special time for teammates of O’Regan as well. As great a football player as he is, O’Regan seems to be an even better person off the field. In addition to being an outstanding student in his own right, he is also always looking out for his teammates, doing his best to help them all succeed both on the field and off.

“If he sees a kid is struggling with school, he will bring him to a professor he feels like the kid should talk to,” Mills said. “And he does all this stuff behind the scenes. He is a special kid, there is just no other way to put it. We get a lot of amazing kids at Amherst, but James is in the top one percent.”

While a player of O’Regan’s skill would certainly be the favorite of any coach, it is his personality that has made him a favorite of Mills.

“I pick on him relentlessly because his disposition allows it,” Mills said with a laugh. “He is one of my all-time favorites and that is why I like to pick on him. He is very mild mannered. He is kind of like your most comfortable shirt. He is just so locked in and focused. He is just an amazing, wonderful human being.”

As much as Mills and the other coaches have loved having O’Regan on their team, he has equally enjoyed being mentored by them.

“My coaches are amazing. I have a great relationship with all of them,” O’Regan said. “I am going on my fourth year with them and our relationship just grows and grows. They are not just mentors, but they are friends. It is very evident that they are all good coaches, and coach Mills is great. It has been a great experience playing for them.”

His relationship with his coaches is an extension of the great support he has always received from his parents Vicki and Ken, along with the rest of his family.

“My parents are my biggest fans. They come to every game,” O’Regan said. “But it is not just them. It is also my sisters, aunts, uncles and cousins. I couldn’t possibly appreciate them more for all of the support they have shown me.”

O’Regan has just two games left and one of those games is one of the biggest games in the entire country, when Amherst will travel to Williams for the “Biggest Little Game in America”. This year’s game will be the 134th meeting between the schools, making it the most played Division 3 rivalry game in history and the fourth most played NCAA game at any level.

O’Regan and his senior teammates are 2-1 in their careers against Williams, winning 28-3 in his freshman year and 45-14 last season, while suffering a 31-24 loss during his sophomore campaign.

“I got my first taste of it my freshman year, and I got to play a little bit in that game because it was a blowout, but it was my sophomore year when the rivalry really showed itself to me when we lost in overtime,” O’Regan said. “If we won, we would have been champs. The place was packed with fans from both schools and we lost in heartbreaking fashion. I think that is when I really understood what the game meant to everyone.

“So, this year going back there is going to be great. It is a great atmosphere, and it will be my last game, so I am sure it will be very emotional, and we want to finish on a high note.”