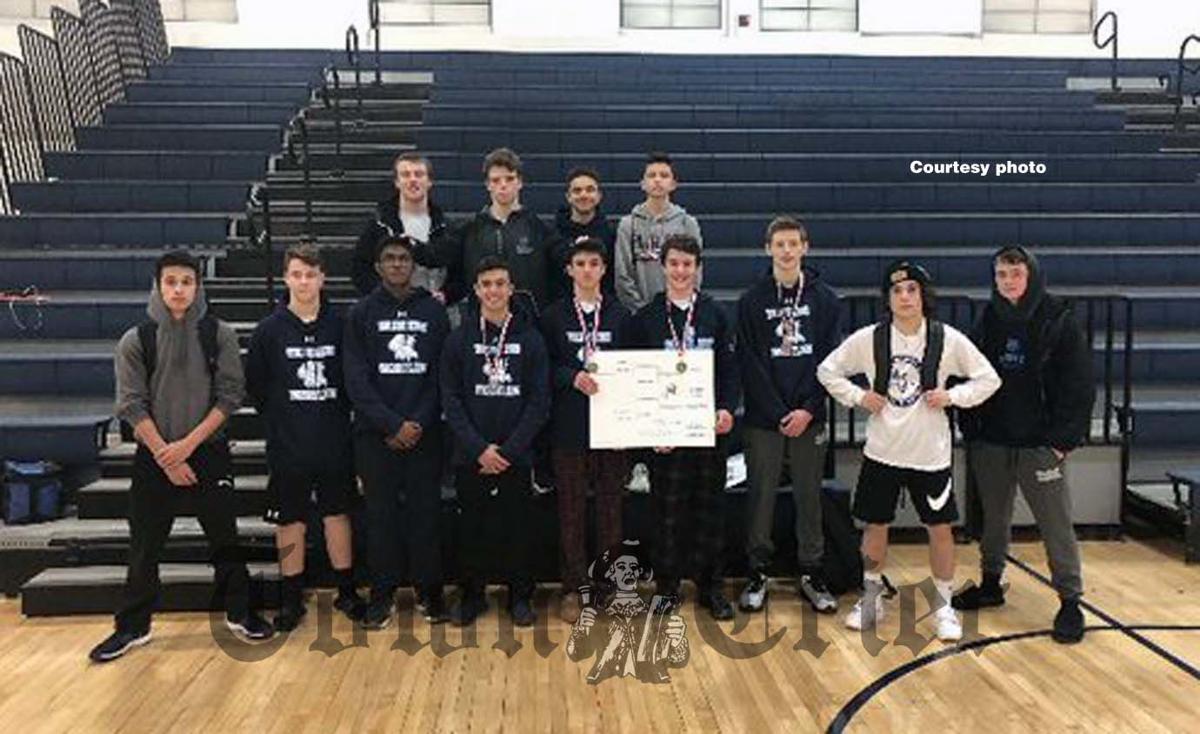 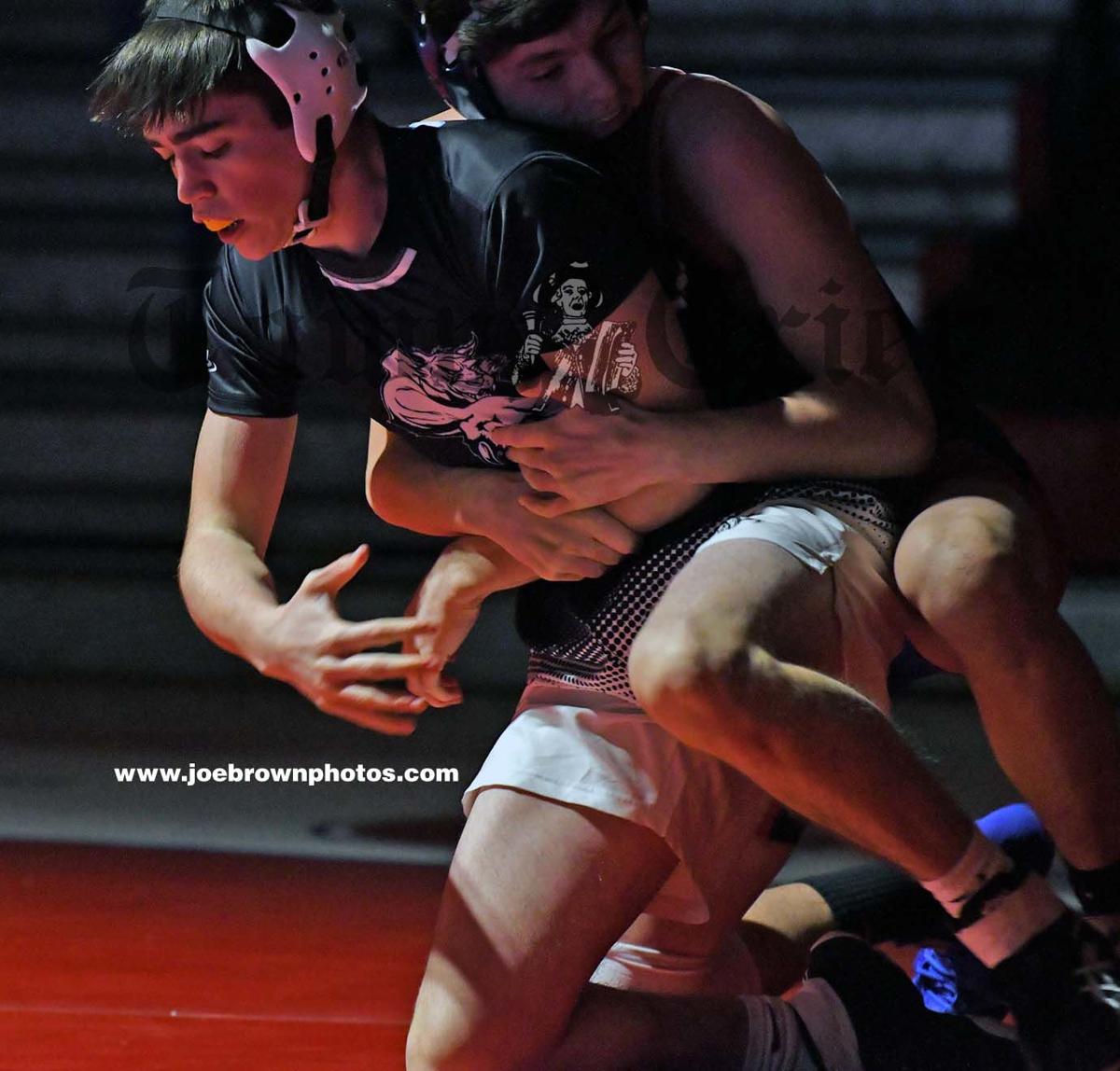 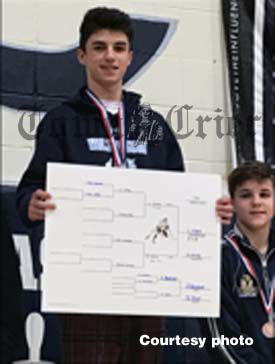 Wilmington’s Luke Vitale was one of the two champions on Saturday at the Cohasset Tournament.

Wilmington’s Luke Vitale was one of the two champions on Saturday at the Cohasset Tournament.

COHASSET – The Cohasset Invitational Tournament has traditionally been a very successful tournament for the Wilmington High Wrestling team, and the 2020 edition of the tournament, held this past Saturday at Cohasset High School was no exception, as the Wildcats had two champions and one finalist on the day.

The Wildcats, despite wrestling with a depleted lineup, also finished very well as a team compiling 129 points to earn a fourth place finish in the seven team field. This was despite having no wrestlers competing above 152 pounds.

Overall, the Wildcats had seven wrestlers place in the top six of their weight class, making it a day to remember for Wilmington coach Joel McKenna and his squad.

“We were thrilled to be able to do so well, even while missing some guys. To have every kid we brought with be able to place in their weight class was outstanding,” McKenna said. “The biggest thing for us is still trying to improve on a weekly basis and they all did that once again. Everyone who wrestled was able to come out of there with something positive after a day like that.”

The Wildcats were led by championship performances by sophomore Luke Vitale at 106 pounds and junior Joe Ganley at 126 pounds, as well as an outstanding effort by senior Jacob Bernard, who was the runner up at 120 pounds.

Vitale dominated on his way to the title, going 3-0 on the day and winning all three of his matches by pin. He started his day with a pin of Alex Weeman of Tri-County in a time of 1:50 in the quarterfinals, followed by a pin of Nikoti Olsen of Cohasset in 1:49 semifinals before winning the title with a pin of Brian Connell, also of Cohasset, in the finals in a time of 1:16.

“Luke is a first year wrestler for us, but he has some experience at the youth level, and you can see he remembers a lot of the stuff that he did years ago, and it is starting to show in his matches,” McKenna said. “He was able to place in the Framingham Tournament and he is starting to beat the kids he is supposed to beat.

“We knew he would have some growing pains at the start, but he has turned things around very quickly. It’s awesome to see him come out on top in a tournament. It is a great building block for him.”

While Vitale’s win may have come as a bit of a surprise, the win by Ganley at 126 pounds was anything but that. Expectations have been high for Ganley all season long and he has consistently responded. Saturday was just the latest strong effort in what has been an outstanding season for Ganley.

Ganley also had three pins on his way to the title, starting with a pin of Henry Rank of Nauset in the quarterfinals, followed by wins by pin over Aleksander Hunter of Hanover in the semifinals and Gregor Guempel of Cohasset in the finals.

“Joe is getting himself to a space where he is building off of what he did last year, and has continued to improve. He is at a level now where he expects to do well,” McKenna said. “He knows what is expected of him. He is very businesslike in his approach. It is like clocking into the office for him.

Bernard came up just a little but short of the title at 120 pounds, pinning Billy Robinson of Rockland in just 41 seconds in the quarterfinals and winning by a 7-0 decision over Joe Nicholson of Tri-County in semifinals. He suffered a loss by pin in the finals to Shayne Galvin of Cohasset, in a match where he led 2-1 at the time of the pin.

“Getting to the finals is an important piece of what Jacob is hoping to do for the rest of the season. He was actually up in points in the final, but he got caught for the pin,” McKenna said. “But overall he wrestled really well. It was against a kid he had beaten before, so it was a match where I know he wished he had back, but he will face him at least one more time in a dual meet, and maybe in states as well.”

Senior Ryan Martin had a big day for himself, going 3-1 on the day to earn a third place finish, with his biggest win of the day coming in his third place match with a pin over Aindreus Ellis of Tri-County in a time of 2:55.

"Ryan has been working his tail off. He has been a fantastic senior captain for us and it has been great to see him wrestling a complete season, being injury free,” McKenna said. “He has been wrestling with more confidence. He is another kid who still has room to improve, but he is doing very well."

Other place winners for the Wildcats included junior Shane Penney who was fourth at 132 pounds, Mark Donovan who was fifth at 106 pounds as was freshman Gabe DaSilva at 113 pounds and junior Dylan Clerico at 145 pounds. Adam Lopez (120 pounds) and Stephen Smolinsky (152) each earned sixth place finishes.

Prior to the Cohasset Invitational, the Wildcats had traveled to Burlington last Wednesday night for a Middlesex League matchup. Despite wrestling well, Wilmington wound up on the short end of a 31-27 decision. McKenna felt that with a little bit of better luck, the Wildcats may have come out on top.

The Red Devils are led by a pair of outstanding wrestlers in twin brothers Zach and Cameron Soda at 113 and 120 pounds respectively, along with Joseph Perna at 126 pounds. Those weight classes are also typically where Wilmington is strongest, but they could not quite match up with Burlington’s best.

"We had a really solid night. Unfortunately, we did not win the coin flip to be able to dictate some key matchups,” McKenna said.”If we had done that, I think we would have won.

“We got off to a 12-0 start, (starting at 195 pounds), but they have some very talented kids, starting with the Soda twins who are excellent, wrestling at some of the weights we are usually strong at. So, that made a big difference. We wrestled tough, but their strengths matched up very well with our strengths"

One Wildcat who had a very big night was Clerico, who won his match at 145 pounds by pin in a time of 1:51.

"He is a second year kid for us, and he is coming back from a shoulder injury and he is doing well. He gives 110 percent all the time, and will do whatever it takes to win,” McKenna said. “I can't say enough good things about him. He is a great character kid. It doesn't matter what the score is, he will keep battling to try and get the victory. That was a great win for him. We are thrilled with how he has come along."

The Wildcats will be back in action on Saturday when they host a quad meet against Leominster, Middleboro and Milford. Wrestling will begin at 10:00 a.m.