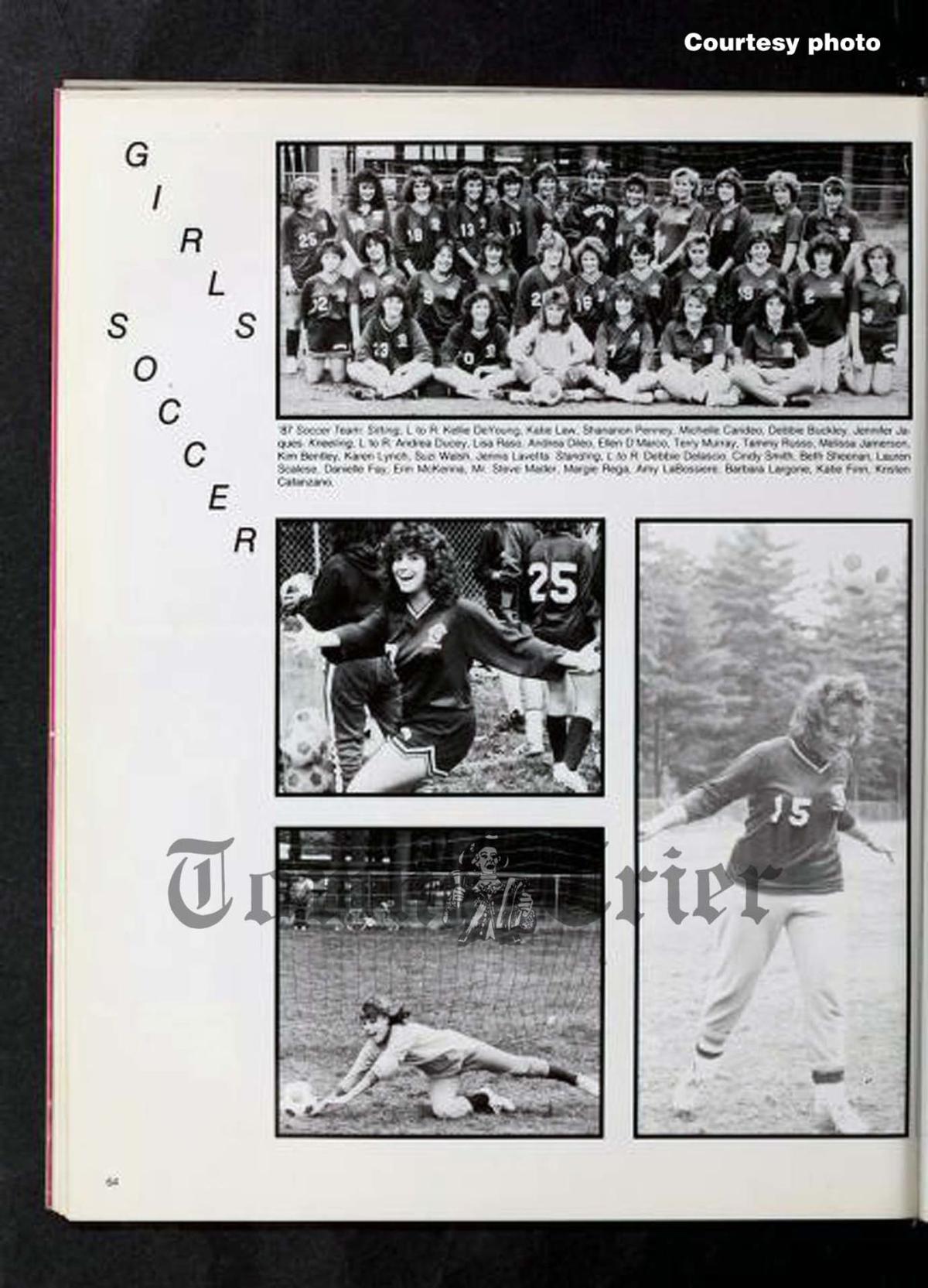 The page out of the WHS Yearbook from the Graduating Class of 1988. It shows highlights and pictures of the 1987 Girls Soccer team’s season, which was the first year that the program went to the varsity level. Last Thursday, Wilmington defeated Belmont, 1-0, to capture the program’s 300th win.     (courtesy photo). 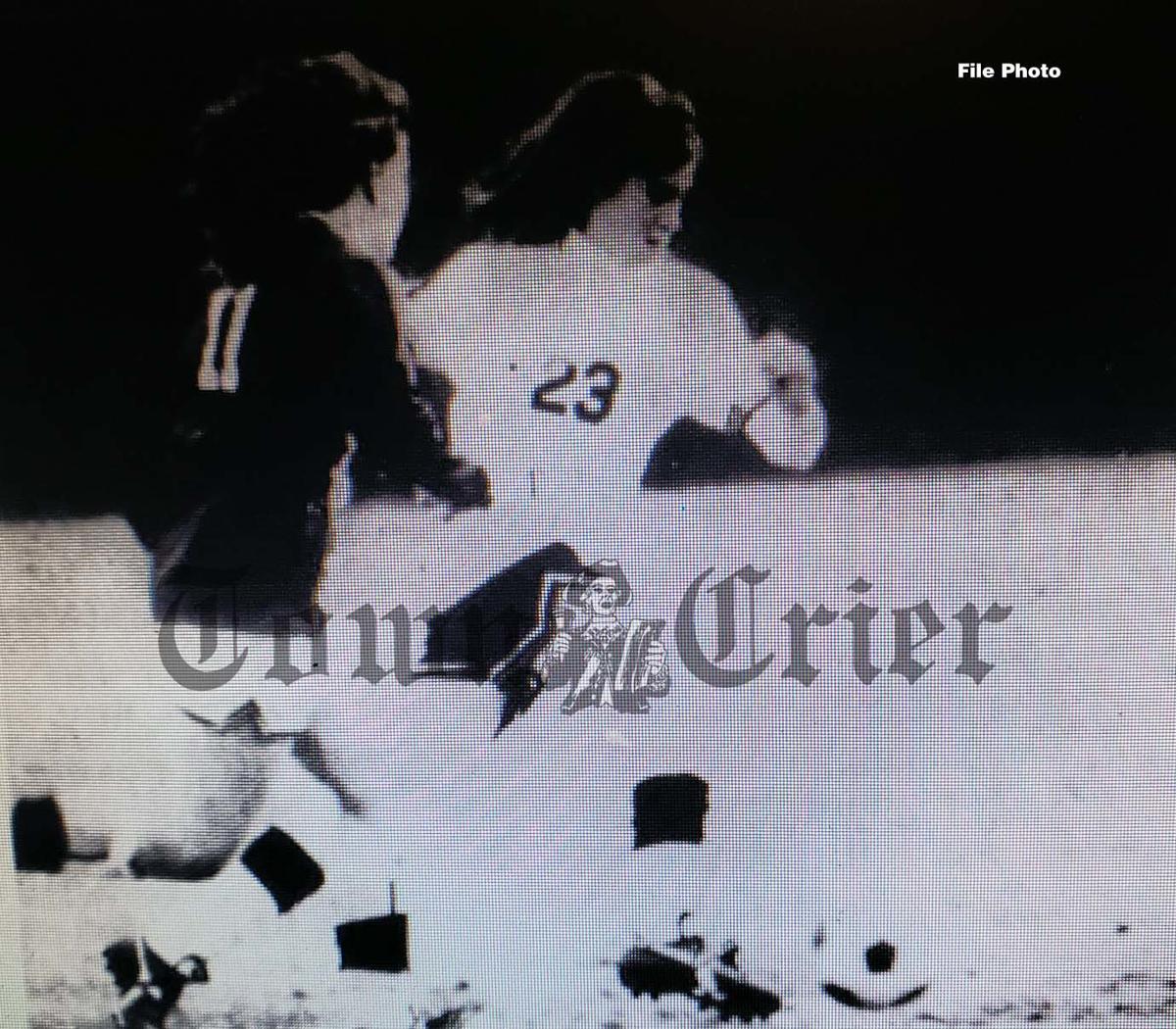 Back in 1988, forward Erin McKenna scored nine goals to lead the Wildcats in scoring and help the team into the state tournament for the first time in program history. She led the program at one point in scoring, but it has since been broken by Lindsay Bruno. 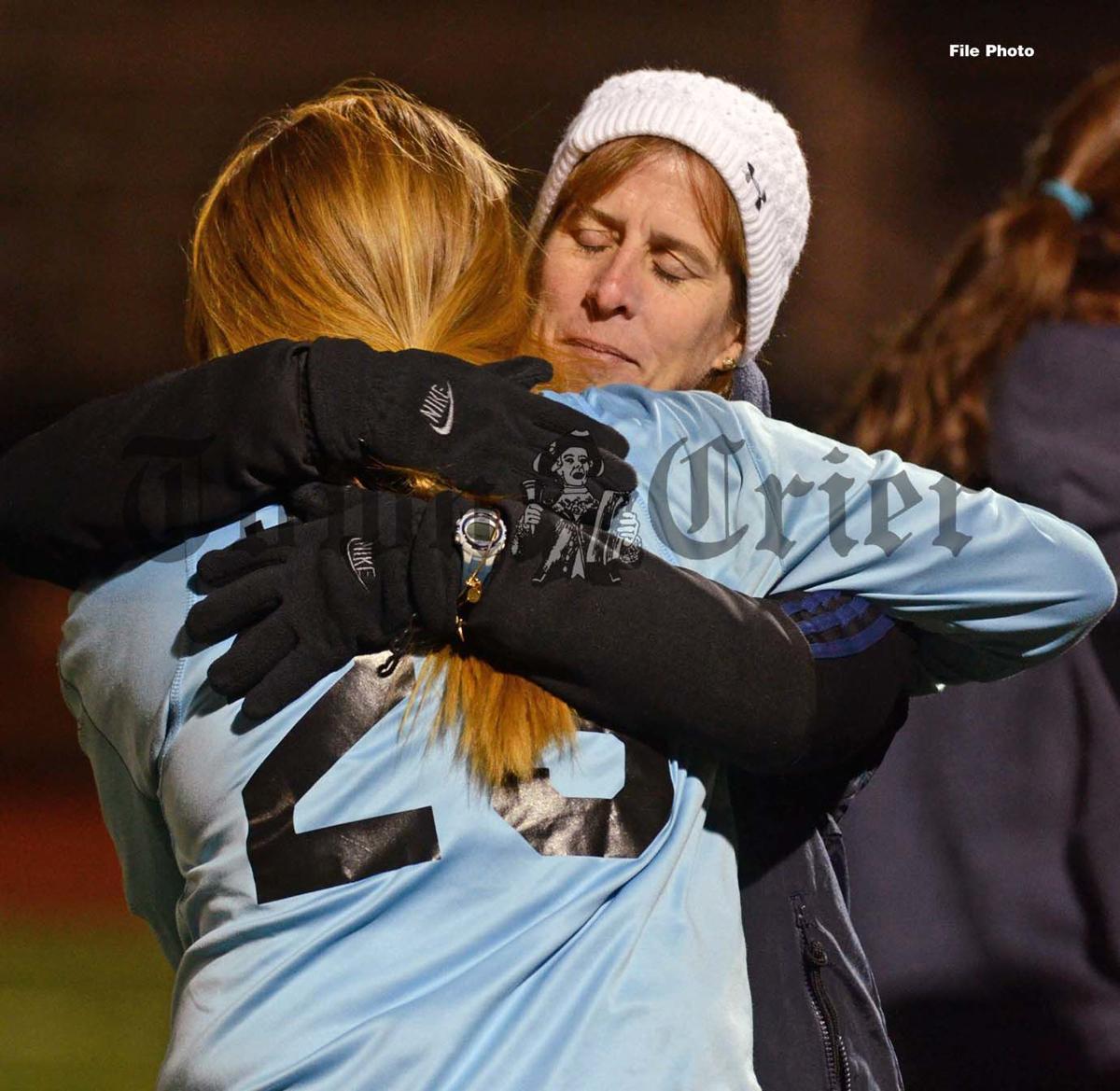 Sue Hendee, shown here consoling goalie Kellie Souza after the state championship loss back in 2013, has been a part of all 300 wins and all 600 games in the program’s history, as an assistant coach the first year, before taking over as head coach in the Fall of 1988 and she has been here ever since.     (file photo).

The page out of the WHS Yearbook from the Graduating Class of 1988. It shows highlights and pictures of the 1987 Girls Soccer team’s season, which was the first year that the program went to the varsity level. Last Thursday, Wilmington defeated Belmont, 1-0, to capture the program’s 300th win.     (courtesy photo).

Back in 1988, forward Erin McKenna scored nine goals to lead the Wildcats in scoring and help the team into the state tournament for the first time in program history. She led the program at one point in scoring, but it has since been broken by Lindsay Bruno.

Sue Hendee, shown here consoling goalie Kellie Souza after the state championship loss back in 2013, has been a part of all 300 wins and all 600 games in the program’s history, as an assistant coach the first year, before taking over as head coach in the Fall of 1988 and she has been here ever since.     (file photo).

WILMINGTON — Back on September 25, 1987, the Wilmington High School girls' soccer team made history by playing in its first ever varsity game, a home contest at the Glen Road School in a game against Dracut.

The Wildcats prevailed in the game, which was truly amazing considering the year before they registered just one win as a JV team.

Last Thursday, September 5th, just a few weeks shy of 32 years later, the Wildcats defeated Belmont, 2-0, which was win No. 300 for the program.

Sue Hendee has been on board for every single one of those 600 games. She was an assistant coach under Steve Mader the first year, before he stepped aside and she became the head coach for the fall of 1988 and has had the position ever since. She said she doesn't remember missing a single game over the 32 years, which is also truly amazing.

Hendee currently has 294 wins, needing six more to close in on her own 300 win milestone.

After the win over Belmont, she was unaware of the 300th program win, and after Hendee was told about it, she was asked about the milestone.

"It is a (great milestone) but as I say every time we meet one of these milestones is if I did it in twenty years, it may be more significant than thirty-whatever. It's more about just longevity than being about being overly impressive," she said with a laugh.

From 1987 to 2018, the Wildcats have had 14 seasons with ten wins or more, have had five (consecutive) seasons of 15 wins or more, and throughout time, Hendee has been on board for the team's nine league championship titles, the trip to the state final, and was there on the cold rainy day back in 1993 when the Wildcats defeated Swampscott, 1-0, for their first ever state tournament victory.

Back in the fall of 1987, Steve Mader was named the head coach. He was a shop teacher at the North Intermediate School at the time, and took the position for one year.

"Mr. Mader was all business," said Karen (Lynch) Scott, a member of the '87 team. "He taught us discipline and teamwork. He was a great coach."

Shannon (Penney) Butt had previously played on the boys team being she switched over to the girls for that inaugural season. She agreed about how much Mader helped the program and the players strive.

"Mr. Mader was very patient with the team," said Butt. "We didn't have any girls other than myself who ever played the game before. All of the girls were athletes, so he got them up to speed pretty quickly with hard practice drills and scrimmages. It was a fun group of girls and Mr. Mader was an excellent coach."

Lynch-Scott recalled several things that Mader did during practices and games.

"He used to make us run two-by two, twice around the field before each game," she recalled. "The first time was silent, the next time was a steady clap.

"Then at practice, he used to tie (goalie) Shannon Penney's shoe laces together so she would learn to dive right and left to save balls. It was hysterical. We (all) had a blast."

Added, Penney-Butt, “Mr. Mader would put me on the goal line with my cleats tied together, then the team would take shots to the corners of the net and I would have to dive with feet tied together. I actually used that technique on the kids I coached. It was fun and took away the fear of diving.”

The 1987 team finished with an overall record of 7-7-4. Danielle Fay was the team's center-midfielder and also the lone player named to the MVC All-Conference team.

The following year, under Hendee, a team that had seven freshmen, finished 11-5-2, qualified for the playoffs, losing 1-0 to Bishop Fenwick in the Division 2 Eastern Mass tournament. The only goal came from Kristen Daley, a Wilmington resident, while Jennifer Bowen and Julie Callahan were also from town and on the Crusaders' squad, who went on to win the second round game.

That historical 1988 team was led by Erin McKenna, who finished with nine goals and five assists and Debbie Dellascio, who had five goals and eight assists.

After that 1988 season, the Wildcats had several down years, winning a combined 12 games over the next three years. In 1992, that changed when the Wildcats finished with an overall record of 12-5-0, which included a first round 3-2 state tournament loss to Georgetown.

Then in the fall of 1993, the team finished the regular season at 9-4-4 and advanced to the state tournament. The Wildcats were matched up against Swampscott on a cold, rainy afternoon game at Alumni Stadium and after starting out very slow and sloppy, the team pulled it together and came away with an exciting 1-0 win. Renee Vachon netted the lone goal of the game, which gave the program it's first ever state tournament victory.

"This is definitely the big monkey off of our backs," said Hendee to Town Crier reporter Jeff Nazzaro at the time.

Wilmington advanced to the next round and faced top-seed Masconomet. With two of its All-Conference players Adrienne Fay and Nancy Pote on the sidelines with injuries to start the game, the 'Cats had a hard time defending speedy striker Becky Blazer, who scored all four of the team's goals to help the Chieftains eliminate the 'Cats with a 4-2 victory. Vachon scored both goals for Wilmington, giving her all three in two tournament games.

Over the next nine seasons — minus two — the 'Cats hovered right around the .500 mark almost every season, finishing with eight wins four different times, while having two sub-par seasons with three and four wins.

After an 8-8-3 record in 2002, the Wildcats struck magic again in 2003 and '04 winning the program's first ever league championship title(s) coming while in the Cape Ann League.

In 2003, the 'Cats finished 13-5-2 overall, which included a 3-0 win over Saugus in the first round of the tournament, followed by a crushing 4-3 loss to Wakefield coming in the second round of penalty kicks, after two scoreless overtime frames. After that loss, Hendee said it was one of the top three all-time performances by any Wilmington team during her coaching tenure.

The following year in 2004, the Wildcats topped out at 12-6-2, which included a 3-0 first round state tournament win over Melrose, before losing 1-0 to Bishop Fenwick.

Before the start of this 2019 season, Hendee has guided the 2010-18 teams to a combined record of 115-38-27, which included winning seven straight Middlesex League Freedom Division titles, coaching two teams that had separate unbeaten regular seasons, both the top two marks in program history.

In the state tournament, her teams qualified in 8-of-the-9 years, made program history by finishing as the Division 2 Eastern Mass (this is the state final as no Western teams in D2) Finalist, also finished as the D2 North Sectional Finalists once and lost in the sectional semi-finals one other time.

In addition, she coached two girls who are currently playing at the D1 level, Olivia Wingate (Notre Dame) and Kayla McCauley (Northeastern).

"Obviously the year that we went to the state championship sticks out and the years that we won league championships were good," said Hendee. "One thing that I will honestly say that I take a lot of pride in and it really doesn't really have a lot to do with me, but speaks well of our program, is the number of girls who have left here and go on to play in college. We have consistently had about a dozen girls every year playing in college.

“I think the girls are coming up (to the program) wanting to do that. I think the majority of the girls who come on this team want to play in college, instead of just ending it here and not going on.

"I'm also very proud whenever I see a former player who either comes back to help our program as coach or has gone on to coach somewhere else. I'm really hoping I don't forget anyone when I say this and if I do I apologize ahead of time, but I'm proud knowing that Lindsay Bruno, Lani Cabral-Pini, Sarah Luz, Leah Potcner, Cassie Grasso, Adrianna Kippenberger, Erin Cowden, Mary Armata and Nancy (Pote) Cassidy have all spent or are current coaches, after playing in our program."