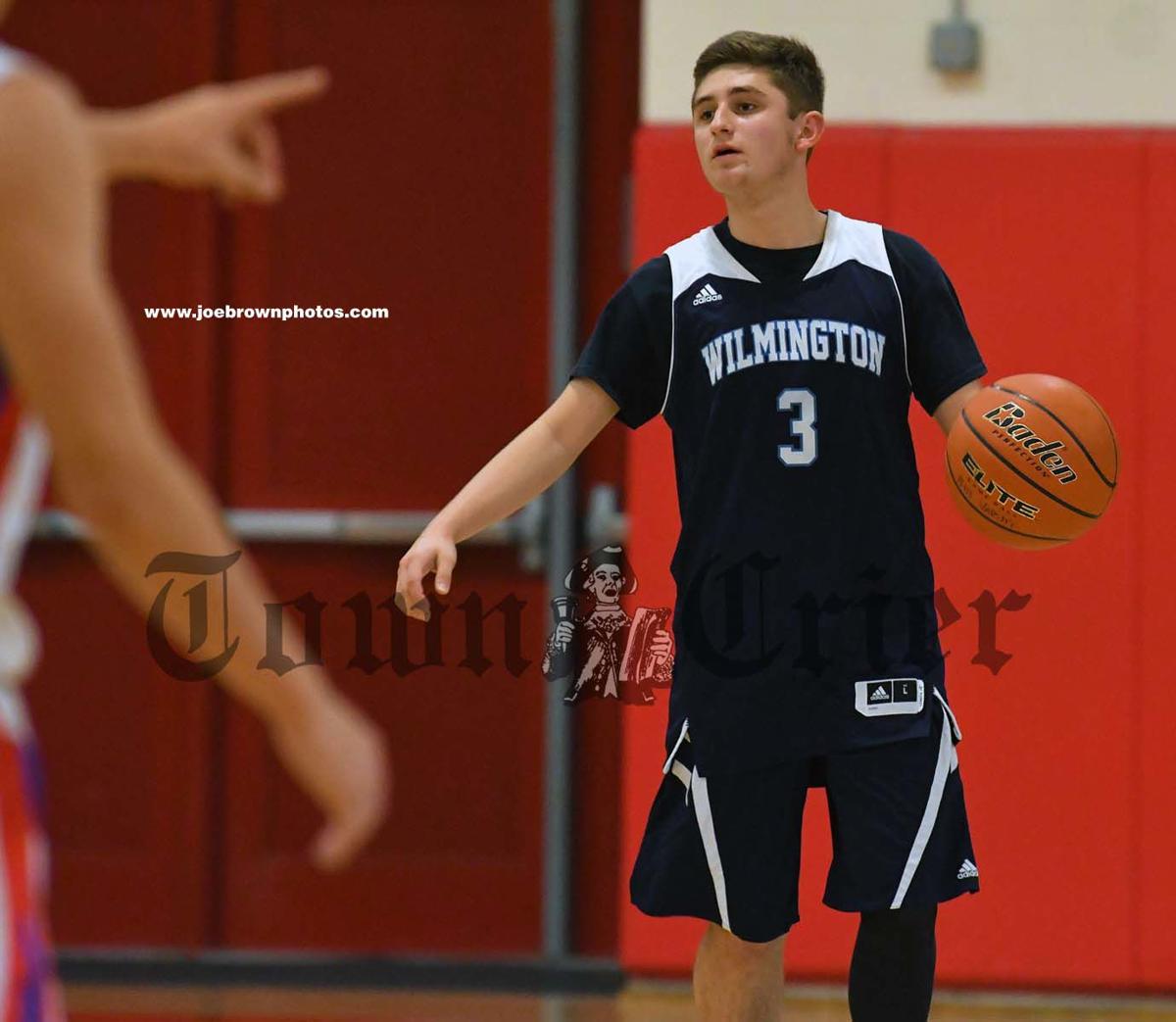 Kevin Palmerino runs a play for the WHS Boys Basketball team during an earlier season game against Burlington. 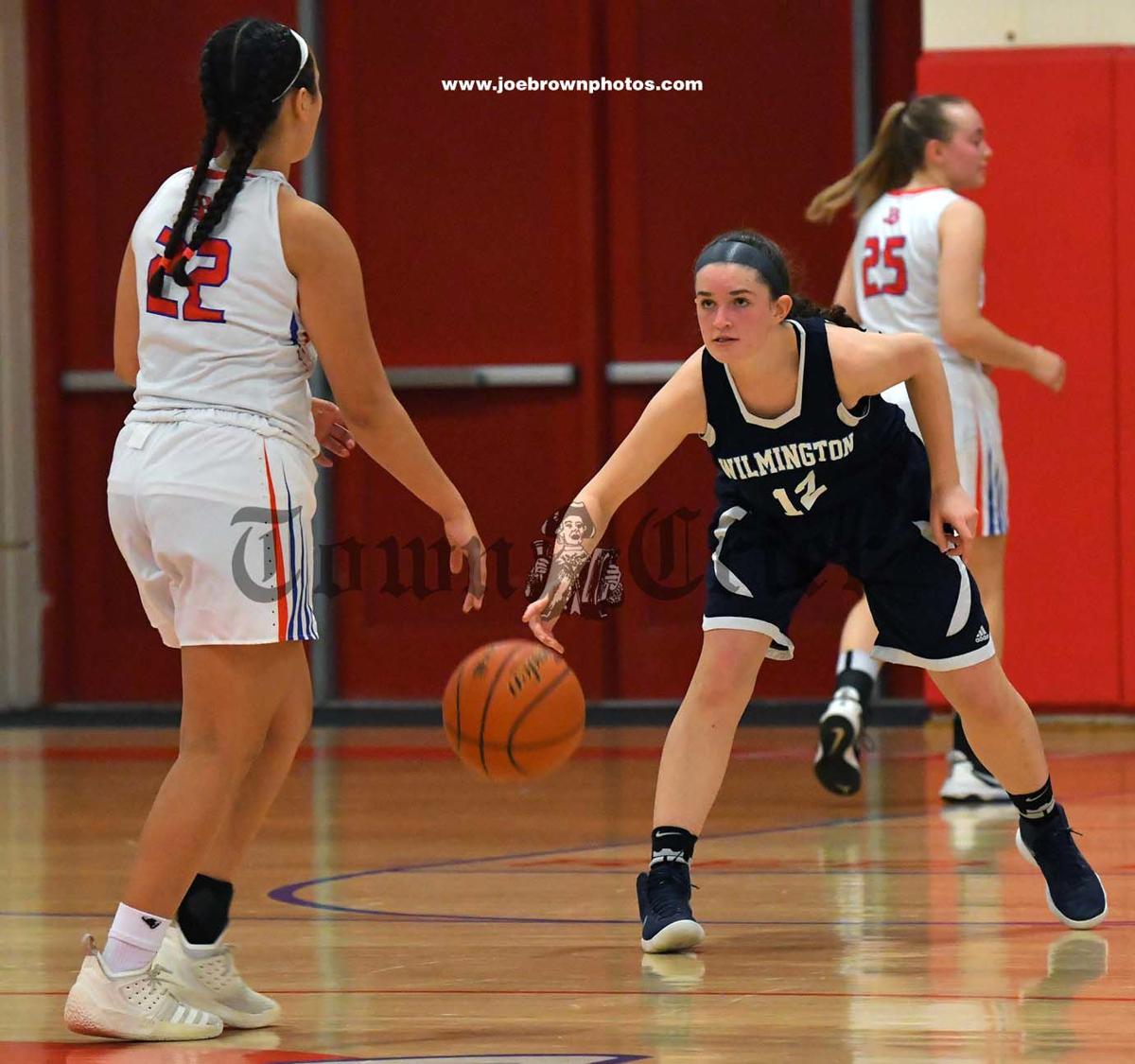 Alyssa Morrison is pretty focused in playing defense against the Red Devils.

Kevin Palmerino runs a play for the WHS Boys Basketball team during an earlier season game against Burlington.

Alyssa Morrison is pretty focused in playing defense against the Red Devils.

WAKEFIELD – Facing a barrage of three-pointers by Wakefield High, the Wilmington High Boys Basketball team gave a great effort, but never really had chance last Friday night, suffering a 79-44 loss on the road to their Middlesex League rivals, dropping to 0-3 on the young season.

Wakefield hit 12 three-pointers on the night, although it seemed like they must have hit 20 of them, as they connected on long range jump shots all night long, keeping the Wildcats off balance, and making it very difficult for the inexperienced squad to stay in the game, despite getting an outstanding performance from sophomore guard Tommy Mallinson, who had 26 points on the night.

Wilmington coach Dennis Ingram, who had not been pleased with his team’s effort in their season opening loss to Burlington, thought the Wildcats improved in that area in this one, but that they were simply overmatched against a very good Wakefield team.

“I think the effort is better. I think the kids care. I think to be as honest as possible, they are just a lot better than us right now. There is just a gap in the talent,” Ingram said. “We don’t have a lot of guys who play year round and we are running into a lot of schools who have kids who have multiple guys or a whole team that is focused on basketball, and that’s kind f what we are seeing right now.”

It was apparent right from the start just how talented Wakefield was as they jumped out to an 8-0 lead just three minutes into the game before the first of Mallinson’s six three pointers on the night got the Wildcats on the board. Wakefield led 21-8 at the end of the first quarter and were well on their way.

The Warriors really put the game away early in the second quarter, going on a 12-1 run to start the quarter, thanks mainly to the hot shooting efforts of junior guard Brett Okundaye, who had 16 points in the game for the Warriors. But he was not alone in his hot shooting as the Warriors put the Wildcats in a 35-13 hole at the half.

“We tried as hard as we could to slow them down,” Ingram said. “That number two (Okundaye) is a special sort of athlete,” Ingram said. “I don’t know if this sounds right, but we felt like when we had them in the half court and were limiting them to one shot, we really slowed them down and were competitive. The problem was, that didn’t happen in every possession of the first half. When they can get out and they can run on us, they really put some separation between us.”

Wakefield did not relent in the third quarter, making sure they had the game secured by knocking down four three pointers during the frame to extend their lead to 58-31 heading into the fourth quarter. Mallinson, Evan Witalicz and Andrew Munsie did their best to keep the Wildcats in the game, but Wakefield proved to just be too strong for Wilmington.

One bright spot on the night for the Wildcats, along with the improved effort, was the play of Mallinson, who was outstanding all night long in his 26-point performance, knocking down six three pointers as he tried to keep the Wildcats in the game.

“Tommy’s a really good player and we are really lucky to have him,” Ingram said. “We talk a lot about guys playing year round basketball and he is one of those guys. He is a gym rat. He is in the gym all year long working on his game and trying to get better and it is nice to see that paying off for him. Every game his confidence gets a little bit higher and the ceiling is high for him this season.”

The Wildcats were back in action on Monday night at home against Triton, with results of that game unavailable as of press time they will resume their season after the new year when they host Middlesex League rival Stoneham on Friday, January 3rd, with tipoff set for 5:15 pm.

With any luck, last Friday night’s game against Wakefield will be one the Wilmington High Girls Basketball team looks back on as a turning point in what still shapes up to be a very promising season for the Wildcats after what has been a slow start.

Despite getting a monster effort from star junior forward Kylie DuCharme, who had 17 points and 21 rebounds on the night, the Wildcats, who were missing star senior guard Jenna Tavanese due to injury, fell to the Warriors by a score of 47-35 to drop their record on the season to 0-3.

Much like their season opener the previous Friday against Burlington, it was a night where the shots simply weren’t falling for most of the Wildcats, who found themselves facing a 29-15 halftime deficit and saw the deficit grow to as many as 17 points in the second half before eventually closing to within 12 down the stretch.

The Wildcats actually played pretty well out of the gate in this one, trailing only 12-11 at the end of one quarter. DuCharme got the Wildcats off to a good start with a highlight reel play midway through the quarter, grabbing a rebound and then going coast to coast for a lay in that gave Wilmington a 6-3 lead in the early going.

Wilmington led 11-9 until the closing seconds of the quarter, until Wakefield’s Hannah Hill drained a three pointer at the buzzer to give the Warriors a 12-11 lead. Unfortunately for the Wildcats it was a portent of things to come.

Wakefield took advantage of numerous Wilmington turnovers as well as some cold shooting in the second quarter to pull away. Wakefield outscored the Wildcats 17-4 in the quarter, including a 17-1 run to start the quarter. Wilmington did not hit a single field goal in the quarter, with four free throws accounting for all of their points.

The Wildcats improved somewhat in the third quarter, scoring 11 points in the quarter, but Wakefield was rolling by that point and were able to extend their lead to as many as 17 points at 40-23 on a Sophie Brown basket with 2:00 left in the quarter. Along with DuCharme, who seemed to grab every available rebound, the Wildcats also got strong efforts in the quarter from Jenna Sweeney, Olivia Spizuocco and Alyssa Morrison.

Wilmington’s improved play continued into the fourth quarter, as they kept the deficit in the 12-14 point range, but it was not enough to make a comeback and the Wildcats suffered their third defeat in as many games.

While the Wildcats were off their game on Friday night, they had played very well in their previous game last Wednesday night at home against a powerful Belmont team before losing a 58-54 double overtime thriller. DuCharme once again led the way for the Wildcats with 22 points and 24 rebounds, while senior captain Olivia Almeida had a fine game of her own with 11 points and junior Kiara Nadeau had eight points.

The Wildcats will be back in action next Monday, December 30th, when they host Tantasqua Regional High School in a non-league matinee at 1:00 pm, followed by another home game on Friday, January 3rd against Middlesex League rival Stoneham, with tipoff set for 7:00 pm.