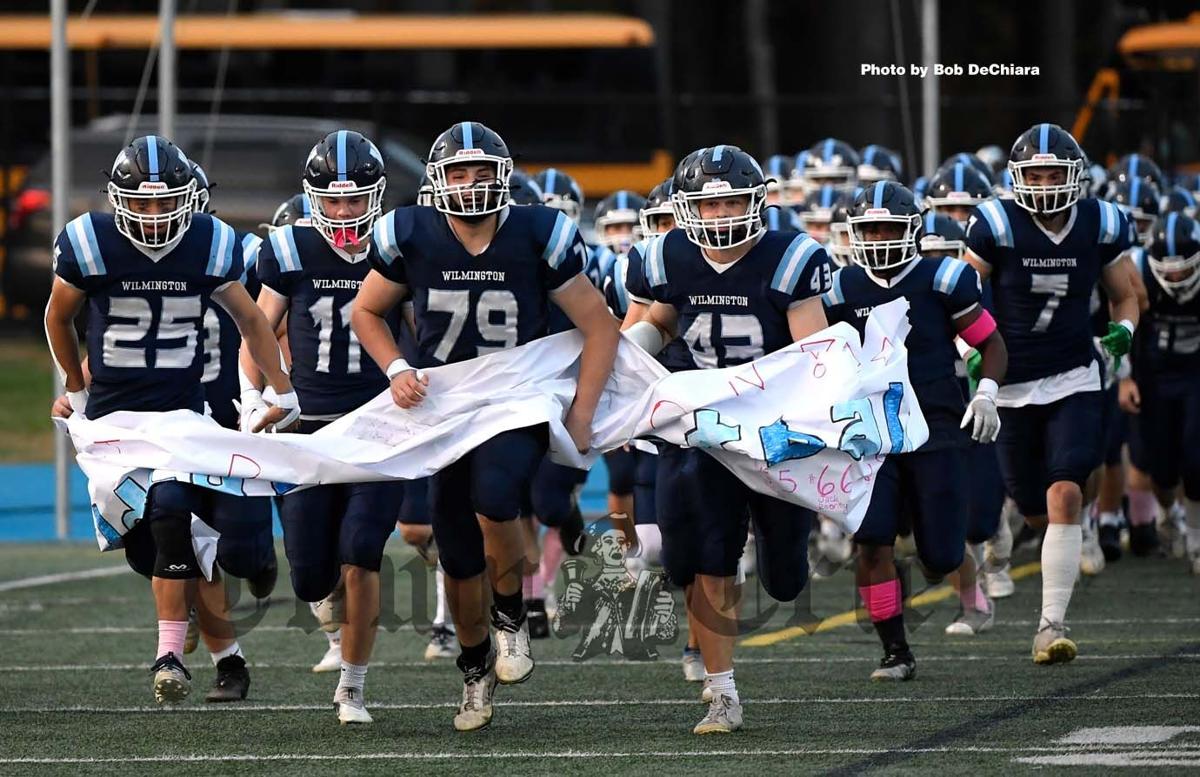 From left, the WHS Football captains, Marcello  Misuraca (25), Gavin Erickson (11), Jake Chirichiello (79) and John Rhind (43) rip through a sign made by the cheerleaders before the start of a recent game. (photo by Bob DeChiara). 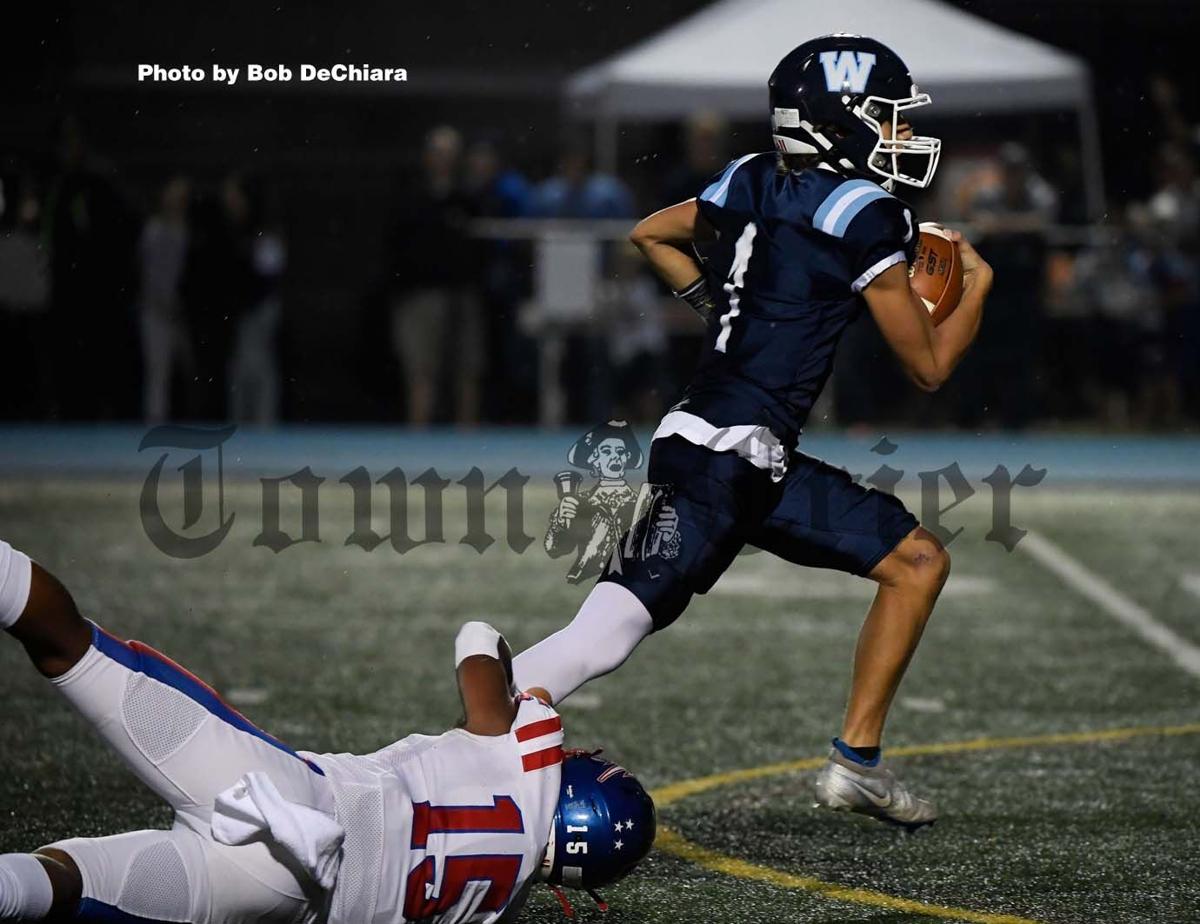 Pedro Germano (1) runs away from Burlington’s Gabriel Santiago (15) during a home game held several weeks ago. (photo by Bob DeChiara).

From left, the WHS Football captains, Marcello  Misuraca (25), Gavin Erickson (11), Jake Chirichiello (79) and John Rhind (43) rip through a sign made by the cheerleaders before the start of a recent game. (photo by Bob DeChiara).

Pedro Germano (1) runs away from Burlington’s Gabriel Santiago (15) during a home game held several weeks ago. (photo by Bob DeChiara).

WILMINGTON – On Friday night, the No. 11 seed Wilmington High School Football team will travel to face the No. 6 seed Middleboro Sachems in the first round of the inaugural Division 4 statewide playoff format.

This new format is 8 divisions of 16 teams in each division (grouped by enrollments) qualifying on a power rankings system, which was based on strength of schedule as opposed to wins and losses, and even in some cases league championship titles.

Scituate, Duxbury, Foxboro, Grafton, Tewksbury, Middleboro, Danvers and Ashland are the top eight seeds of the bracket and all host games, while the bottom half consists of Northampton, Wayland, Wilmington, Bedford, Marlboro, Newburyport, South High Commerce and East Longmeadow.

Wilmington will enter the game with a 5-3 record, compared to Middleboro, out of the South Shore League, with a 6-2 record.

“They are a really good team obviously. They played a pretty tough schedule,” said Wilmington head coach Craig Turner. “They are big upfront, they (run) a spread (offense). Their quarterback is good, they have good wide receivers so this will be a good test. They are big upfront, similar to what we saw against Woburn. It seems like everyone we play is big upfront.”

In 2017, Middleboro captured the Division 6 state championship title, which included an Eastern Mass victory over Stoneham, before topping Littleton. That was followed by back-to-back 4-7 seasons, before finishing 5-1 during the Fall-2 season, led by QB Timmy Crowley, who tossed 20 TDs in six games but he has since graduated.

This year's team has four of the returning five offensive linemen from that 5-1 team, including 6-foot-4 two-way star Logan Verhaegan. He blocks for an offensive group that features QB Jacob Briggs, running back Nate Tullish and wide receivers Matt Gwodzdz, Isaiah Furtado and Justin Mather.

“(Briggs) is a bigger kid with a good arm but I would say that he's a little bit more of a runner. Their running back (Tullish) is good. They are really tough and they do a lot of different things,” said Turner.

This season, the Sachems have defeated Apponequet, New Bedford, East Bridgewater, Norwell, Rockland and most recently Bridgewater, 22-6. In that game, Briggs was 11-for-15 for 141 yards and 2 TD passes and Tullish rushed for 110 of his 130 yards in the second half.

Middleboro's two losses have come against Taunton and Abington.

“If you told me back in August that we would be the 11th seed, having a drive an hour-plus away and it was a match-up that I thought we could be competitive, I would have signed up for that. I wouldn't say that this is a good match-up and we're thrilled with it as we would much rather be the home team. It's going to be tough making that drive but I think it's definitely going to be a game that we can be competitive and have a chance to win.”

Offensively for Wilmington, QB Pedro Germano has been really impressive this season, throwing for almost 800 yards with 9 TD strikes, while he's also second on the team in rushing with close to 400 yards and another five scores. Marcello Misuraca and Gavin Erickson have combined for almost 800 rushing yards and 10 TDs and receiving, John Germano and Erickson each have 15 receptions, while combining for almost 500 yards and scoring seven TDs.

“For us, we want to shorten the game so we need to hold into the ball, drive the ball down the field and make them play defense a lot. They have a lot of big guys who play a lot of snaps, both on offense and defense. If we can try to wear those guys down, I think it'll be benefit us,” said Turner.

Wilmington has been all over the place this season. The 'Cats played a terrific second half against Woburn, played really well in wins over Melrose and Watertown, but played poorly in games against Greater Lowell, Stoneham and at times last week with Wakefield.

“We have showed (this season that we are capable of playing to our full potential) and I know that we have it in us. The kids were excited (Monday) at practice. For this group, it's their first time having a chance to play in the playoffs, so it was fun to go to a late season practice and they were all jacked up and ready to be there. They were ready to dig in. This will be a long week between film and practice, and hopefully we get a nice celebratory ride home on Friday, otherwise that will really stink,” said Turner with a laugh.

This will mark the second time that Turner is taking a Wilmington team to the playoffs. The last time came in 2017, his first year as coach. That's when the 'Cats blanked Gloucester for the program's first ever playoff victory, before falling to a very talented Marblehead team, 24-17, despite a fantastic second half charge.

“That first year no one really expected much of us. It was more like giving a chance to let people know that I kind of know what I'm doing. It was fun going on that run,” said Turner. “It was almost like we had to prove ourselves as a staff, but for us it's like 'hey look, we know what we're doing'.

“With this group I think it's a little bit different. I almost feel the pressure a little bit more with this group because it's the best group that we've had in a couple of years. The amount of work that this group has put in and how good of kids they are and how much I enjoy being around them, I feel that pressure of wanting them to succeed. I think they deserve to have a special senior year. I'm hoping that we can put that together for these kids, go on a run and do something special that hasn't been done around here before.

“It's going to be tough as I imagine we'll be on the road for this week obviously and if were to advance past this week, most likely we will be on the road again for the duration of it. The kids are pretty excited about this opportunity, so hopefully we'll have a good amount of people who will make the drive down there, which would be nice. I watched some of their games on YouTube and they have a nice little atmosphere down there, so it's going to be a tough place to play.”

This will mark the seventh time in program history that the Wildcats will be competing in post-season play. The first time came in 1976 with the 20-12 loss to Lynn Classical in the Division 2 Super Bowl.