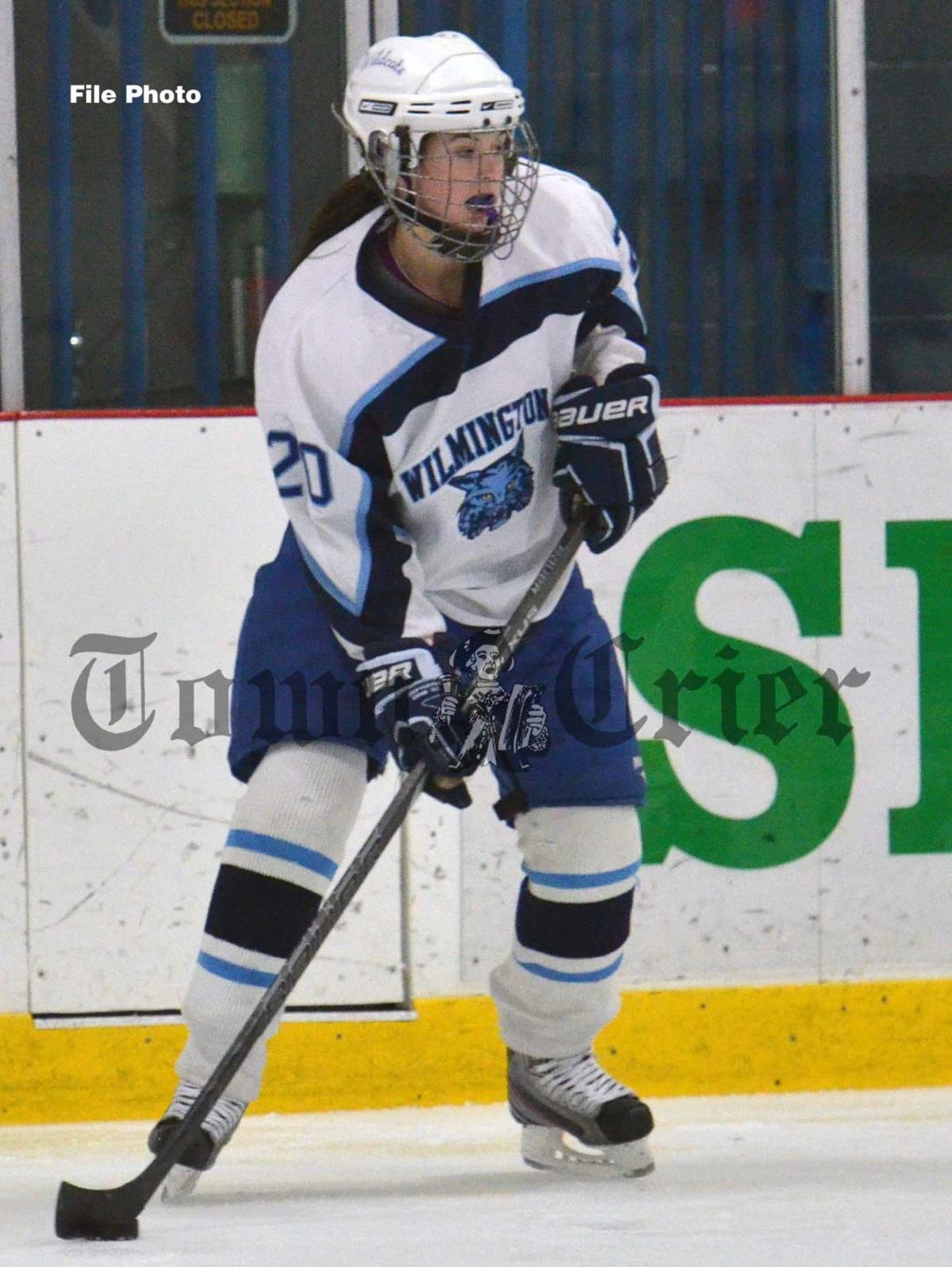 Former Town Crier Female Athlete of the Year Lauren Fitch is one of the members of the All-Decade Girls’ Hockey team. (file photo). 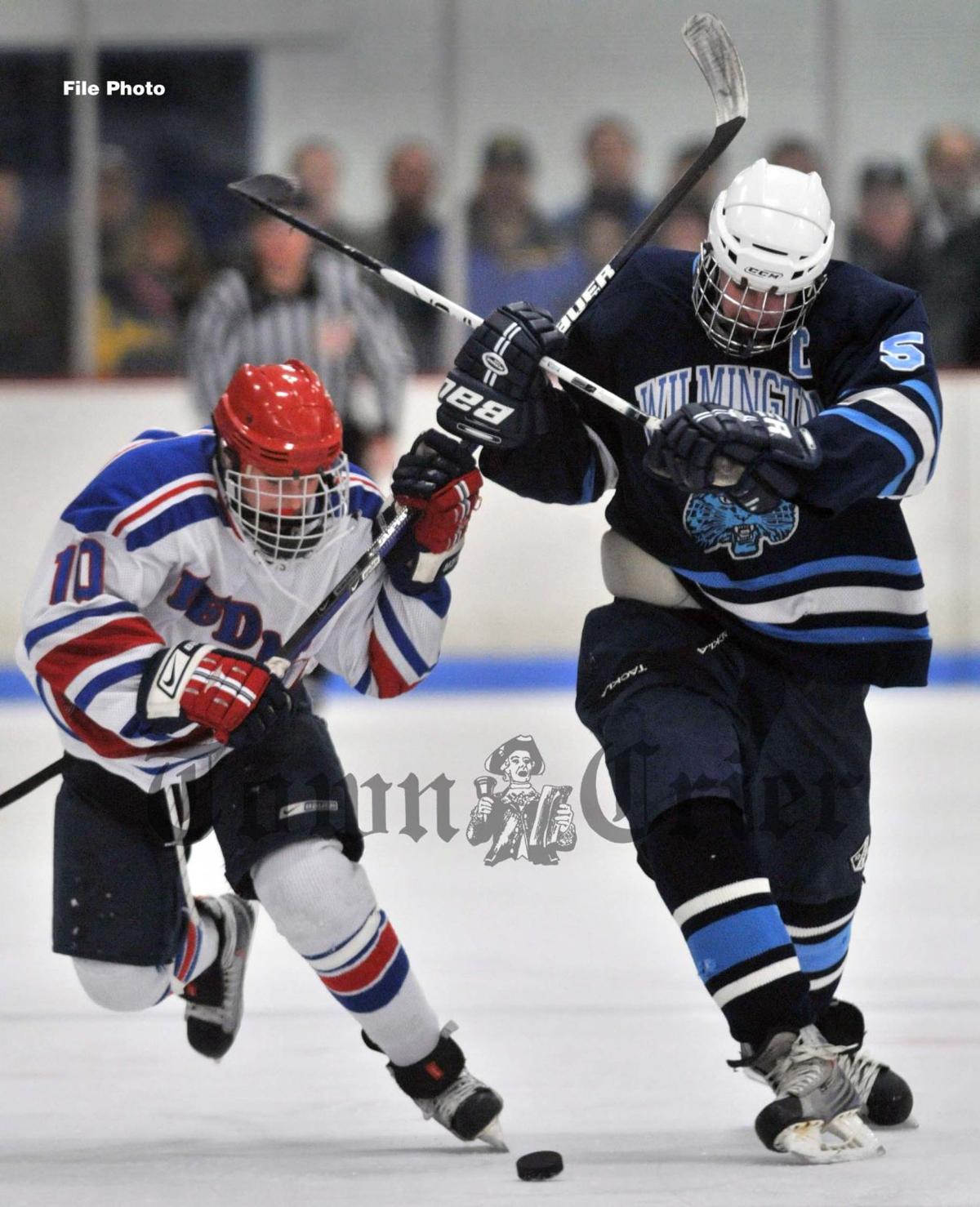 Back in 2010, it was difficult to get the puck away from Danny Cushing (far right), one of the two defenseman on the Town Crier’s WHS Boys Hockey All-Decade team. (file photo).

Former Town Crier Female Athlete of the Year Lauren Fitch is one of the members of the All-Decade Girls’ Hockey team. (file photo).

Back in 2010, it was difficult to get the puck away from Danny Cushing (far right), one of the two defenseman on the Town Crier’s WHS Boys Hockey All-Decade team. (file photo).

WILMINGTON – When Wilmington elected to leave the Cape Ann League for the Middlesex League, it was no secret that the program that would suffer the most with the switch was the girls' hockey team. The teams in the Liberty Division are just too talented, too deep and their numbers are too overwhelming for teams like the 'Cats.

Over the last few years, Wilmington has done a much better job of competing against the Freedom Division teams, however, in the entire decade, the 'Cats reached seven wins just once, and failed to qualify for the state tournament.

Joe Gautreau then took over and held the spot for three years, finishing with a combined mark of 10-41-7. He resigned and John Lapiana did a marvelous job turning the program around with records of 5-13-2 and 6-10-5 in '18 and '19, combining for an 11-23-7 record, and then led the program to the state tournament this past winter, but that season doesn't count here.

Again these picks were made solely by me, and qualifications is the athlete must have completed her senior year playing at WHS.

G: Melanie Hayden — Had it not been for Hayden, the program would have easily surpassed 150 losses in the decade. She kept the team in every game, facing usually 35 shots per game. She improved drastically and simply put, she was the 'heart-and-soul' of the program during her run.

D: Colleen Good — She played earlier in the decade and again was solid defender, who was also pretty good with the stick and rushing the puck. She went on to play at Salem State University.

D: Lauren Fitch — A former Town Crier Female Athlete of the Year and daughter of Hall of Famer Gordie, Lauren was such a tough cookie on the ice. She was physical and tough, and just a steady blueliner. After high school, she went to Mass Maritime Academy.

F: Jill Miele — While she is known for breaking the all-time scoring mark in field hockey, she could also find the back of the net on the ice. Her senior year, she finished with 12 goals, a third of the team's total goals on the season.

F: Caroline Robarge — Certainly an underrated athlete between playing ice hockey, lacrosse and field hockey. She finished with 14 varsity letters, spending six years with the hockey program and was known for being a strong skater, who had I believe also netted 12 goals her senior season.

F: Lia Kourkoutas — Over the decade, only three girls were named to the Lowell Sun First team All-Star team with Miele and Kourkoutas as two of them. A smaller, gritty athlete, who never seemed to get tired, she finished with a solid 14 goals and 26 assists in her career.

It was a banner decade for the WHS Boys Hockey team, literally. Two banners have gone up at the Ristuccia Rink and I believe at the high school for the state championship seasons of 2011-'12 and 2012-'13.

The hockey team became the third program in WHS history to win back-to-back state championship titles, joining the outdoor boys track team in 1974 and '75 and then the girls softball team in 1993 and '94.

Besides two seasons, from 2010-'19, the Wildcats were one of the top teams in the state, as well as both Divisions 1 and 2. It started off with the unbeaten season in 2009-'10, then two years later was the first title, followed by the second and followed by arguably one of the two greatest high school hockey games I have ever seen with the 11-round shoot-out loss to Reading in the Division 1 state final (the D2 Sectional Final win vs Tewksbury in '08 would be the other).

Throughout the decade, Steve Scanlon and his great staff of assistants, combined for a record of 139-68-27, which included 21 playoff victories, eight state tournament appearances and three league titles, coming in 2010 and '11 in the Cape Ann League and then 2013 in the Middlesex League.

Throughout the decade, the program also had a ton of players leave for other schools or Jr. Hockey, while getting a handful of talented transfer players in. That being said, that made this All-Decade Team in particular difficult to pick, as my qualification is the players have to finish out their senior season with the program. Still, despite several stud players who left, this group below is as talented as any.

G: Drew Foley – Wilmington has been blessed with stud goalies for years and decades, and no one, no one comes close to what Foley did. He finished with a 52-11-14 record, 19 shut outs and a 1.60 GAA, and oh yeah, two state championship titles. His playoff stats are among the best the state has ever seen.

D: Danny Cushing – Performance wise only his 2010 season counts here, but in my opinion, easily the program's best defenseman since Chet Ferreira. Standing at 6-foot-3, 218 pounds as a senior, he dominated games with his physical play, his reach, his shot and endurance.

He missed four games in his senior year with a shoulder injury, but helped the team finish with an unbeaten regular season record and a 22-1-1 overall mark. In that season, the team gave up just 22 goals in 24 games and posted six shut outs.

D: Brian Pickett – Pickett was a totally different type of defenseman than Cushing. Besides the difference in size, Pickett was more offensive minded, absolutely terrific on the power play and was known for his poke-checks.

He was such an important part of the two championship seasons and he just finished up a solid career at Assumption College.

F: Luke Foley – One of my all-time favorite kids to write about, Foley was a four-year player at WHS and part of the 'Irish Line' for several years with Brendan McDonough and Cody McGowan. The three of them were terrific together. Foley was a part of two state championship titles and the trip to the D1 sectional final. That senior year he finished with 20 goals and 16 assists.

F: Dalton Rolli – When you are the lone captain of the first ever state championship team in school history, it's hard to argue that Rolli doesn't belong on this team. Add to that, being a talented offensive minded forward with a great shot, Rolli was a great linemate for Cam Owens and Jake Rogers during that first championship season as the three of them finished with over 100 points combined.

F: Cam Owens – Always a fun interview, Owens was as gifted as anyone with more moves than Elvis. He broke his brother Justin's all-time scoring mark finishing with 158 points coming in 3.5 years, led the team to two state championship titles, including all but dominating both games.