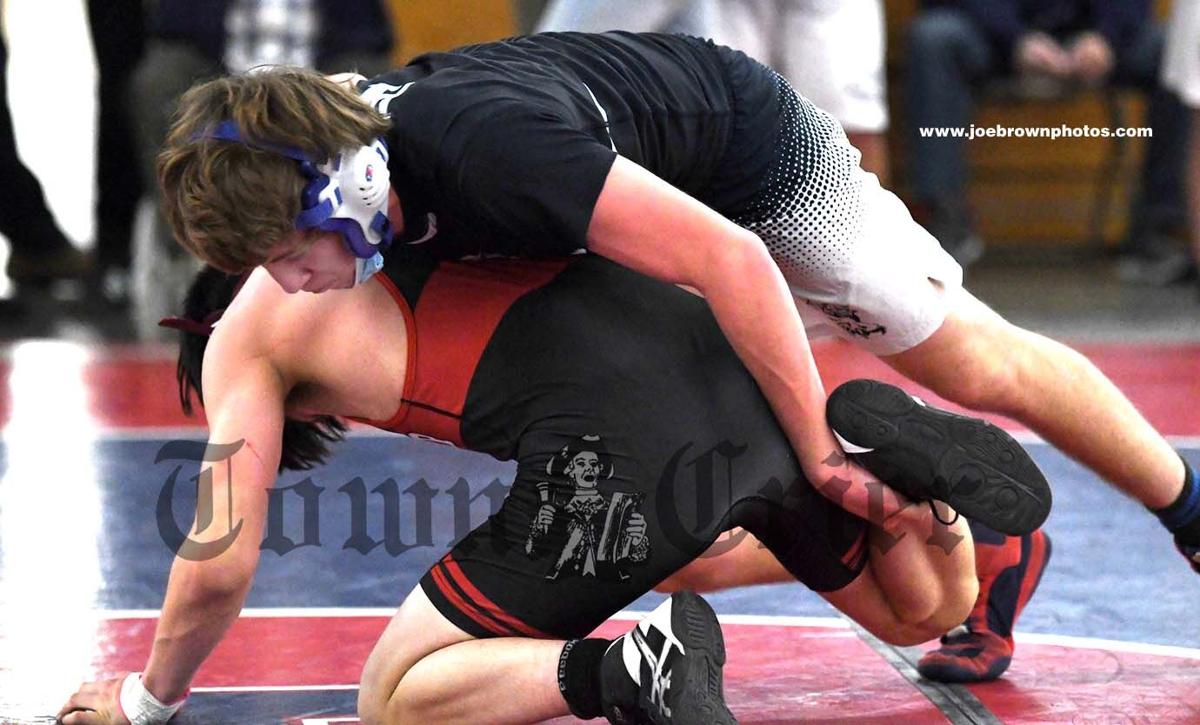 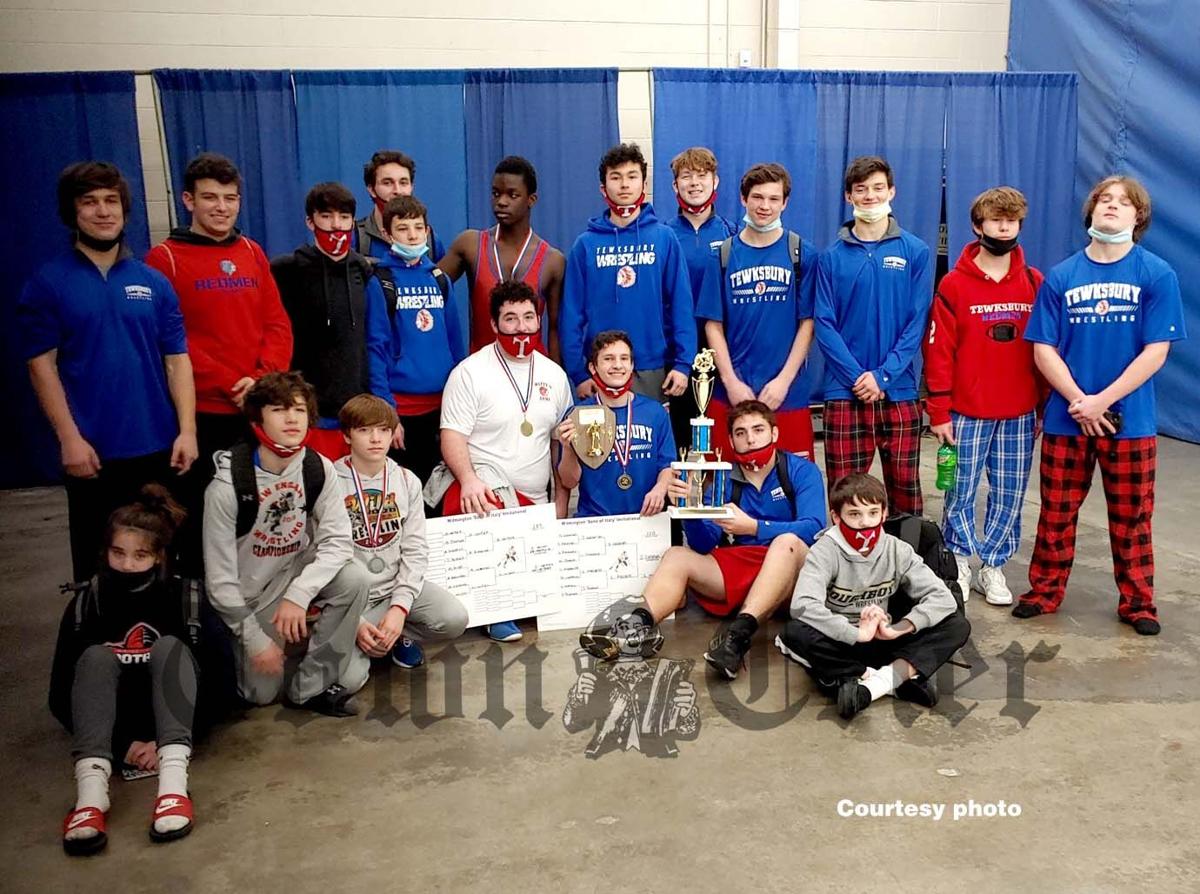 WILMINGTON – On Saturday, the 30th annual Wilmington Sons of Italy Wrestling tournament was held at the Shriner's Auditorium. All three of our local teams – Wilmington, Tewksbury and Shawsheen Tech – did well, with five combined wrestlers in the finals, and three coming away with championship titles including Tewksbury's Jack Callahan (120) and Nick Wilson (285) as well as Shawsheen's Sid Tildsley (132).

It was a pretty solid day for the Rams with a first place finish, along with two thirds and two fourth places.

"Not a bad day," said Shawsheen coach Doug Pratt. "We're very young so our guys are still learning and still getting there. "We had five guys who earned a medal, so not too bad. We're primarily a freshmen and sophomore team, so we're going to take our lumps here and there, but hopefully as we go through the year, we'll get to where we want to be at the end of the season."

The highlight of the day came from freshman Sidney Tildsley, who captured the 132-pound division. As the No. 2 seed, he started off with a victory over Gabriel Bischoff of Greater Lowell, pinning him at the 4:25 mark. That was followed by a 57 second pin over Central Catholic's Ashley Dehney. From there he was in the semi-finals and defeated North Andover's Carson Milovanovic with a pin at the 2:14 mark. Then in the finals, he topped No. 1 seed Daniel Beaton of Gloucester with a pin at the 2:18 mark.

"To be honest, (Tildsley is) a freshman but he's probably the most experienced guy in our room. We expect big things out of him and he expects big things out of himself. He has worked hard for a long, long time. I've known him since he was a baby and seen him coming up through the ranks (of youth wrestling) and he should be with these elite guys," said Pratt.

Taking third included Lucien Tremblay at 120 pounds. He won his first match by a pin (33:36) over Central Catholic's Nick Spero, before falling to Callahan, the eventual champion. From there, Tremblay pinned Winchester's Noah Cafferky, before winning a 9-4 decision over Eli Feldman of Brookline in the consolation finals.

The other third place came from Caleb Caceres at 138 pounds. He topped Natick's Colin Daly, before getting pinned by Essex Tech's Ian Darling. From there, Caceres defeated both Daniel Sayag of Brookline and then Whittier's Lucas Welling, 5-1, in the consolation final.

At 113 pounds, Brayton Carbone finished fourth. He pinned Joshua Lister of North Andover at the 1:31 mark before losing a 7-0 decision to No. 2 seed Miles Darling, putting him into the loser's bracket. From there he pinned Tewksbury's Benjamin Barrasso at 2:12, before falling to Xaverian's Nathan Sayers by a 10-2 major decision.

Also taking fourth was Xavier Santiago in the 220-pound class. He had a tougher battle, after losing his first match, he won four straight, the first two by pins at the 1:43 and 1:42, before receiving a forfeit win, which put him into the consolation final where he beat Wilmington's Dempsey Murphy in a hard-fought, 3-1 decision.

The highlight of the day for the Redmen was the fact that four different kids advanced to the finals, two winning and two getting defeated. Callahan and Wilson won their matches, while, Nick Desisto (106) and Hunter Johnson (145) finished in second place.

"This was definitely a step forward for the program, that's for sure," said Redmen head coach Steve Kasprzak. "I'm happy with how our young kids wrestled, especially the ones who didn't place. They wrestled tough. The Fleming kid got three wins, Mercier at 182 pounds got his first win, so we had a lot of good things happen today outside of the four kids who were in the finals. It was a good day for us and we're still a work in progress. We have a lot of kids who we hope can keep their heads above water and if we can bring these other kids along, then we're certainly heading in the right direction. Today is a good example of that."

Starting at 106 pounds, Desisto, who wasn't ranked in the top three of his weight class, won his first two matches over Shawsheen's Dante Graziano by pin (1:12) and then over No. 1 seed Marco Albanese of Melrose with another pin, this one at 1:38, before being defeated by the No. 2 seed, Louie Linton of Natick, with a first period pin.

At 113 pounds. Benjamin Barrasso went 2-2 with wins over Anthony Baia of Greater Lowell and Max LoRusso of Saugus/Peabody. At 132, Jack Donovan went 1-2 with a win over Hector Jordan of Whittier Tech. At 138 pounds, Sam Ros posted a win over Arolodo Barcelos of Dedham. At 152, Ryan Fleming finished 3-2 and his wins came against Mark Pappalardo of Central Catholic, Braedon Jaber of Whittier Tech and Cullen Holmes from Middleboro, before losing to Chris Schultz of Xaverian. At 182, Mercer defeated Josean Castillo of Salem for his first varsity win and then at 195, Brett Graham finished 2-2 with wins over Austin Malandain of Shawsheen and Yvenson Jeanty of Wilmington.

The Wildcats didn't have any wrestlers reach the final, but Dempsey Murphy reached the consolation final, losing 3-1 to Santiago. Murphy lost his first match and then fired off three straight wins over Greater Lowell's Ron Allard, Central Catholic's John Delaney and Winchester's Jadd Farra, the No. 1 seed of the tournament with a pin coming at 36 seconds.

"Dempsey is just tough, just so tough. He went out and beat the number one seed today and Dempsey, just like the other guys, took some steps up, some strides today so hopefully this is the start of something," said head coach Peter Mitchell.

The other place finisher came at 285 pounds with Elijah Valdivieso, who was sixth. He got a first round bye, before losing his second round match to the eventual champion, Wilson of Tewksbury and then was defeated by Brookline's Gabriel Thomas.

"Elijah is technically not even a heavyweight. He's a 220-pounder but we bumped him up to heavyweight because Dempsey won the 220-pound spot, and Elijah wrestled tough in his matches," said Mitchell.

At 126 pounds, Adam Lopez finished 2-2 with wins over Brookline's Leo Samuels and Shawsheen's Sam Palmieri. At 138, Nikolaos Iascone also went 2-2 with wins over Bryan Clayton of Winchester and Sean Hall of Woburn. At 195 pounds, Jeanty went 1-2 with a win over Melrose's Jack Ruelle.

Last Wednesday, Wilmington was defeated by Melrose, 69-12, to fall to 2-2 on the season. Misuraca and Murphy both won their matches, both by pins.

“A strong start by the lower weights, and a strong finish by the upper three weights. Brett Graham had a come from behind win and pin. Luke Shaw got his first varsity win of the season in a great match to seal the victory, And Nick Wilson put the exclamation point on it with a solid business like win,” said Kasprzak.