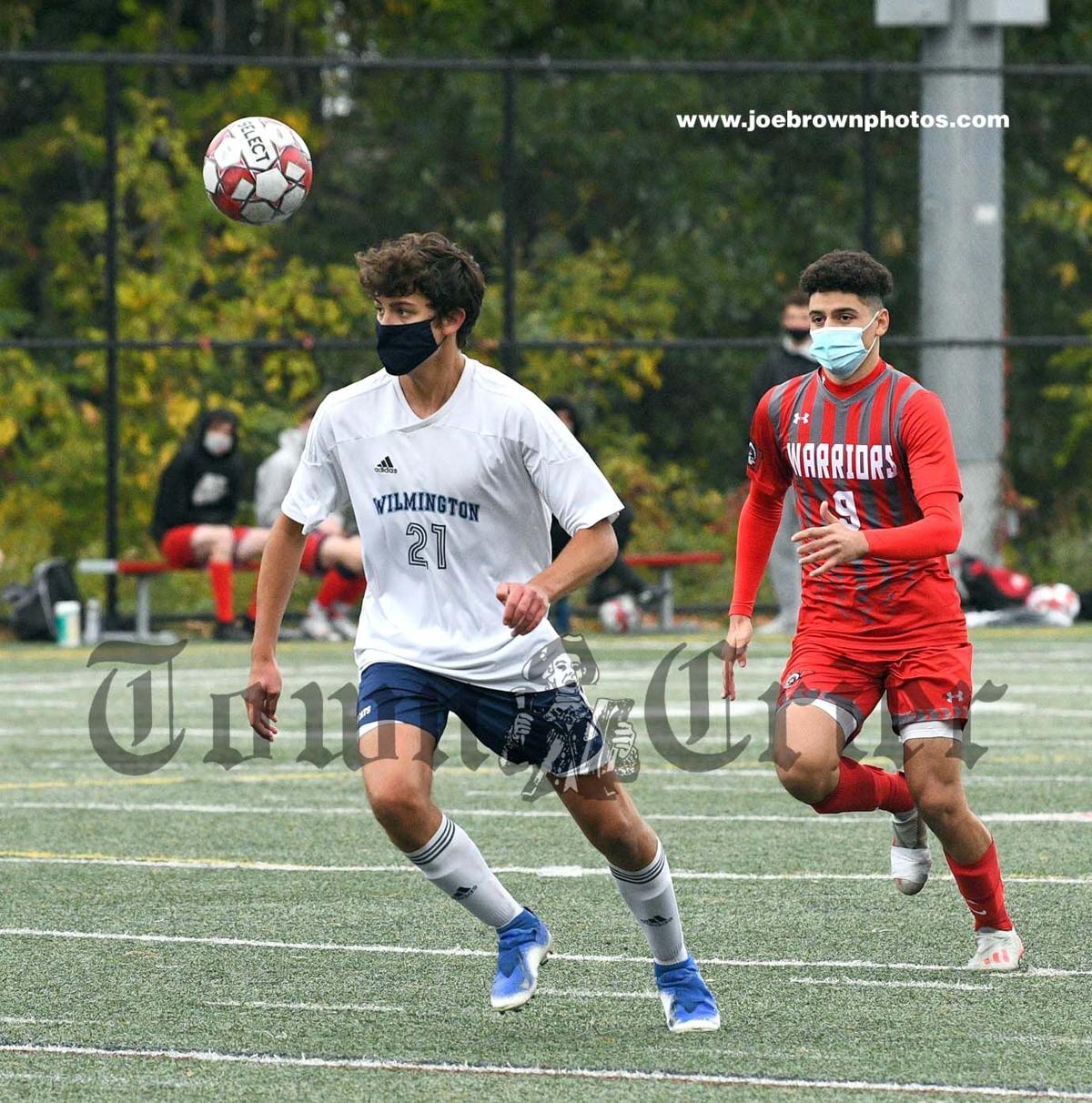 During Monday morning’s game held at Wakefield High School, Wilmington's Patrick Xavier keeps an eye on the ball — he cannot use his head on it — as that is against the rules this season. (photo by JoeBrownphotos.com). 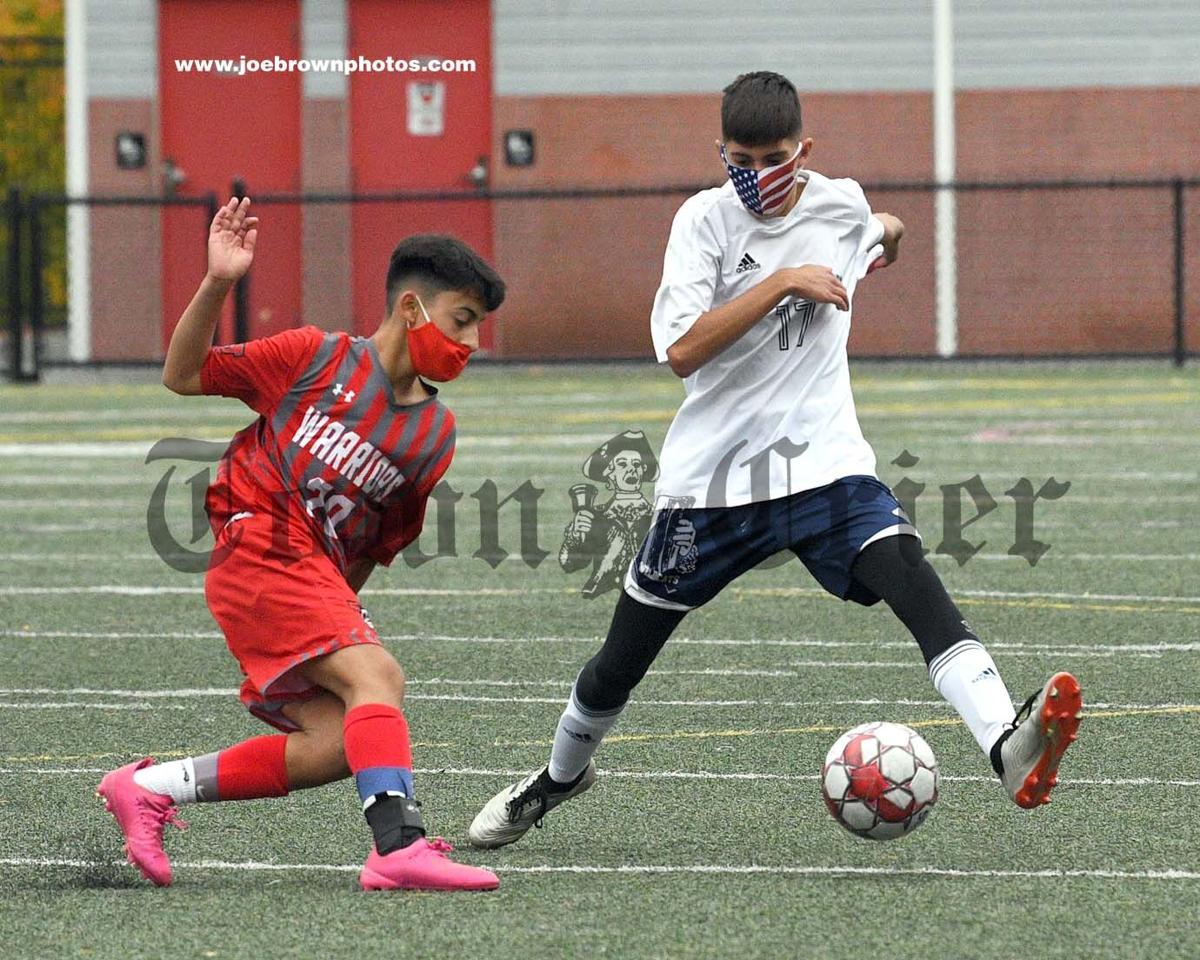 Wilmington's Evan Shackleford takes control of the ball and the play in the team’s loss to Wakefield on Monday. (photo by JoeBrownphotos.com). 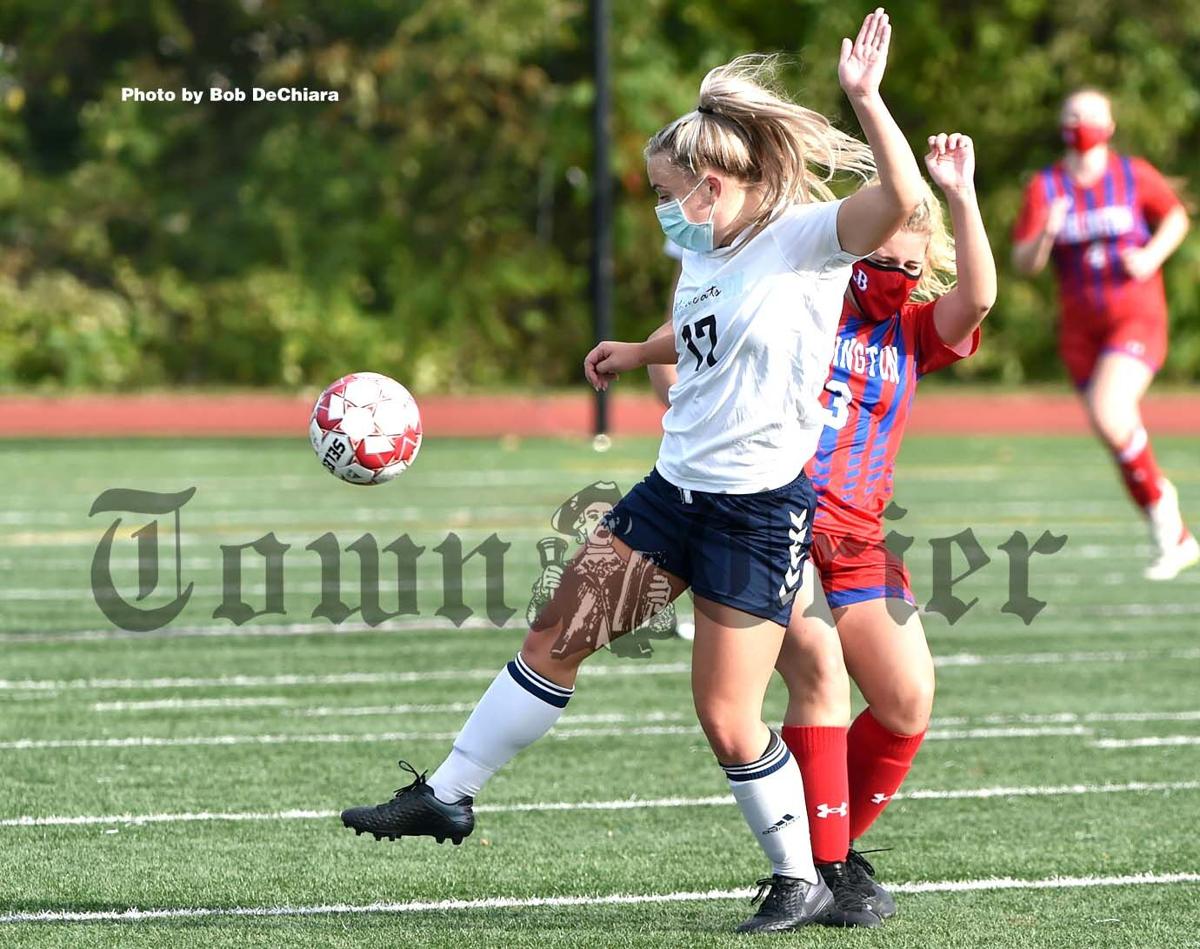 During Monday morning’s game held at Wakefield High School, Wilmington's Patrick Xavier keeps an eye on the ball — he cannot use his head on it — as that is against the rules this season. (photo by JoeBrownphotos.com).

Wilmington's Evan Shackleford takes control of the ball and the play in the team’s loss to Wakefield on Monday. (photo by JoeBrownphotos.com).

WILMINGTON – It didn’t take the Wilmington High Boys Soccer team long to put the memory of last season behind them.

After struggling to a 1-15-2 record in 2019, the Wildcats have already doubled last season’s win total, improving to 2-0 on the 2020 campaign after a dominant 3-0 win over Middlesex League Freedom Division Burlington at Alumni Field on Saturday.

Both Wildcats wins have this season have come over Burlington.

It was Senior Day at Wilmington High, with the annual event normally held at the end of the season moved to the beginning due to COVID-19 concerns, and appropriately enough, they were led by goals by a pair of seniors, with Aidan McGrath and Chris Wong each tallying for the Wildcats. Junior Christian O’Neal had the other goal for the Wildcats, the first of his varsity career.

“Last year was a rough year. We were in a lot of the contests, but just couldn’t turn the corner, so it is nice to get off to a good start this season,” Wilmington coach Steve Scanlon said.

Just as they are off to a fast start to the season the Wildcats got off to a fast start in this one, taking a 1-0 lead less than five minutes into the game, when Wong connected for the first varsity goal of his career, pouncing on a loose ball in front and putting it past the Burlington keeper for an early 1-0 advantage for the Wildcats.

“Last Saturday (in their season opening win over Burlington), we got off to a slow start. We came on good at the end, but we wanted to try and start quick this time so getting that first goal was big,” Scanlon said. “That was the plan, to try and come out and attack right away. I feel like we are the stronger skilled team, so we wanted to come out and get on the attack right away and try and decide the thing as early as we could.

“It was also great to see a couple of kids Chris Wong and Christian O’Neal each getting their first varsity goals.”

Wilmington was unable to score again in the first quarter, but they had a huge edge in territorial play, with virtually the entire quarter being played on the Burlington side of the field. Senior Stephen Smolinsky had the best chance to add to the lead, ringing one off the crossbar with about six minutes left in the frame, but the teams ended the quarter with the Wildcats clinging to their 1-0 lead.

That changed pretty quickly however at the start of the second quarter, when McGrath connected on a terrific shot from about 30 yards out. McGrath’s shot also went off the crossbar, but unlike Smolinsky, he got the fortuitous bounce, with the ball then eluding the Burlington keeper for a 2-0 lead just one minute into the quarter.

The 2-0 score remained the same through the second and third quarters, with play evening out somewhat. Burlington however, never really seriously threatened to even the score, with the Wilmington defense limiting their zone penetration to the perimeter, severely limiting the Red Devils chances.

“We are playing a little more of a defensive style now. We are playing like a 4-5-1 formation and we are trying to do a lot of counter attacking with numbers and be a little more stout defensively,” Scanlon said. “That is working out well for us right now. The back four is playing really well right now, and Justin is playing really well in net. He controls a lot, and when the ball does come through, he can come out of the net and gobble it up.”

The Wildcats capped their scoring with 7:28 left in the game when O’Neal connected for his first varsity goal after a tremendous setup by fellow senior Owen Surette, who had a great game in his own right. Surette pulled the defense towards him at the side of the net, and deftly passed the ball over to O’Neal in front, who wasted little time in burying it in the back of the net to make the score 3-0 and dim any hopes of a potential Burlington comeback.

“It’s good to have Owen back,” Scanlon said. “He is aa talented athlete, and he made a great play there. He kind of tiptoed the line there and gave Christian an easy one to tap in.”

The 2-0 start for the Wildcats is obviously just what Scanlon and his players were hoping for, but he also knows they must continue to play well if they want to carry their success through the rest of the season. With a veteran lineup, Scanlon is confident they can do just that.

“We’ve got a veteran team, with ten or eleven seniors, so we are hoping we can turn the corner and keep on picking up some wins,” Scanlon said.

On Monday, Wilmington was defeated by Wakefield, 3-1, to fall to 2-1 on the season.

The Wilmington High School girls' soccer team grabbed two more wins over Burlington, 2-1, and then Wakefield, 4-0, to improve to 3-0 on the season, while outscoring opponents 10-2 in three games.

“I always like the spread out scoring,” said head coach Sue Hendee. “(In the first half) we were really moving the ball well and we had a nice combinations through transition bringing the ball from defense to offense and working together, identifying the through ball as their defense was caught a little flat sometimes and I thought we did a nice job doing that. Both goalies did well in goal so overall I would say that I am pleased with how things are going.”

In the win over Burlington, Granara scored both goals with assists going to Flynn and Almeida.

“Burlington was much improved in the second game. We really came to play again but they packed it in the middle, so that made it difficult for us to get anything through. Still, there's been a lot of good play and today I'm glad that I was able to get everyone in and get everyone some experience. I think the seniors are showing how strong they really are,” said Hendee.

Both the boys and girls teams will face Wakefield again this Saturday with the girls away and the boys home. Both games are slated to begin at 3:00 pm.