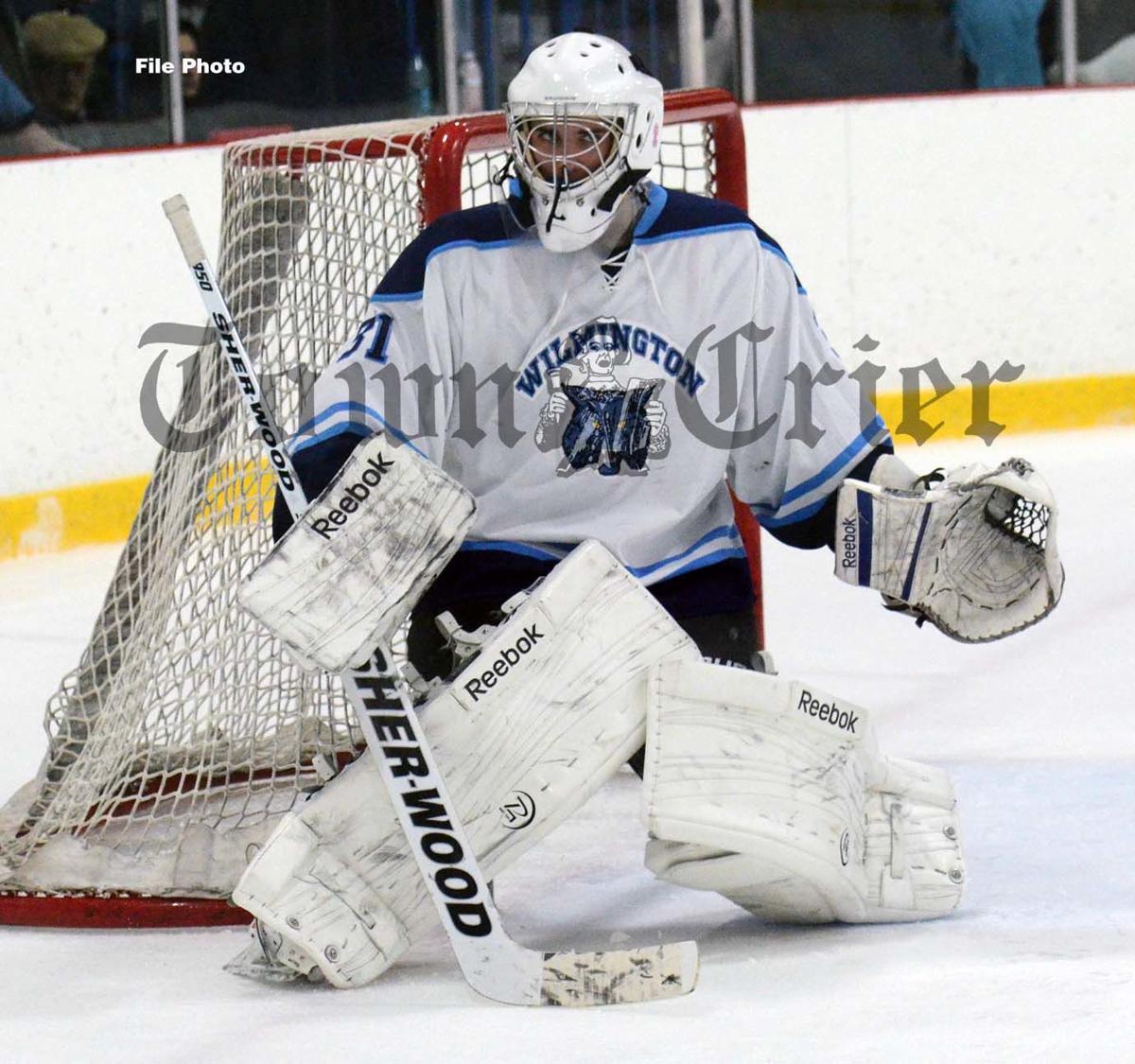 Back in 2013, Drew Foley was the Town Crier’s Male Athlete of the Year. During his career, he had many highlights, including being named the Middlesex League’s Player of the Year in ice hockey    (file photo/Joe Brown). 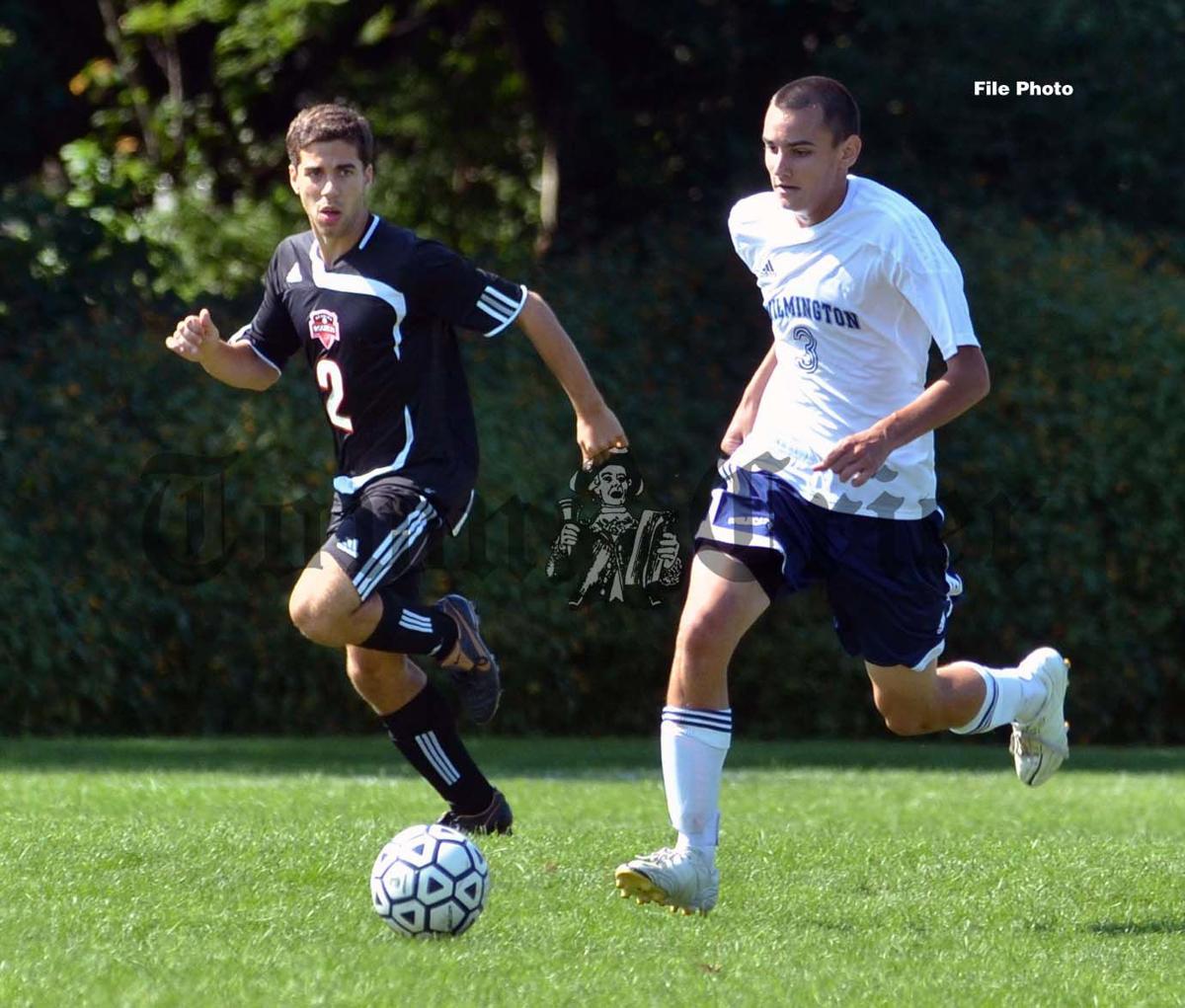 Back in 2013, Drew Foley was the Town Crier’s Male Athlete of the Year. During his career, he had many highlights, including being named the Middlesex League’s Player of the Year in soccer.     (file photo/Joe Brown).

Back in 2013, Drew Foley was the Town Crier’s Male Athlete of the Year. During his career, he had many highlights, including being named the Middlesex League’s Player of the Year in ice hockey    (file photo/Joe Brown).

Back in 2013, Drew Foley was the Town Crier’s Male Athlete of the Year. During his career, he had many highlights, including being named the Middlesex League’s Player of the Year in soccer.     (file photo/Joe Brown).

But in the end, there really was only one choice to be the Wilmington Town Crier’s Male Athlete of the Decade, and that honor belongs to Drew Foley, a 2014 graduate of Wilmington High, who starred as both a goalie for the Wildcat hockey team and as a forward/midfielder for the Soccer team.

Foley, who was always humble during his high school career despite his great accomplishments, maintained his humble demeanor when he was informed that he was selected as the Athlete of the Decade.

“It means a lot to me to be selected among so many great athletes,” Foley said. “When you are in high school, you really don’t think of these kinds of honors. In high school, I was just having fun hanging out with my friends and playing sports I loved. Looking back, I was just glad I got to make a lot of great friends, who I am still friends with today.”

Humble as he may want to be, the reality is that when it comes to his hockey career, saying that Foley “starred” as a goalie is vastly underselling just how great he was. Not only was he the greatest goalie in the history of the Wilmington High Hockey program, he was arguably one of the all-time greatest goaltenders the state has ever seen.

In three years as the starter for the Wildcats, he finished with an overall record of 52-11-4, with 19 shut outs and a 1.49 GAA. He led the team to back-to-back Division 2 state championship titles, including posting a shut out in the second win.

His senior year, he took the team to the Division 1 North Sectional Finals, losing an epic 11-round shoot out game against Reading, which was his only playoff defeat. He made 40 saves that night, excluding the shootout. He was 13-1 in playoff competition during his career.

Steve Scanlon, who coached Foley in both sports, knows just what a special athlete he was, and also what a dedicated athlete he was.

“Drew was certainly an above average talent. He was not just skilled in two sports, but his temperament, especially in the net (in hockey) made him such a great athlete,” Scanlon said. “He never got too high and he never got too low. He was confident in his abilities. Not once did he ever lose his head in a hockey or on the soccer field and that helped him become a great leader. He was very calm. He was a good natural athlete with good skills, but the way he was always so even keel, even when things would get crazy, is what separated him from other athletes.”

During his sophomore season of 2012, he was 16-4-5 for the ice hockey team, had a .931 save percentage, a 1.69 GAA, six shut outs, was 5-0 in the playoffs, giving up just seven goals and posting one shut out. He capped his remarkable season by making 20 saves in the Wildcats 3-2 win over Franklin in the state championship game at TD Garden, delivering the first ever state title in hockey to Wilmington High.

Foley remembers vividly his team gradually coming together as the season progressed before culminating in the great win over Franklin.

“At the beginning of the season, we didn’t know what to expect, because we had just joined the Middlesex League, but we tied Woburn 2-2 on opening night, and that made us realize that we belonged in the league,” Foley said. “When we got to the tournament, we knocked off Lynnfield, who was the number one seed, in the second round, and we started to believe we could beat anyone.

“And then after we beat Franklin to win the state title, I think coach Scanlon said it best when he said that this was for the whole town and also for all of the great teams that Wilmington had in the past, but were never able to get this far.”

Scanlon also recalls that season very well, especially Foley’s brilliant performance to help pull out the shocking victory over Lynnfield in the quarterfinals.

“In the third period, they were all over us. They had a couple of power plays and he just kept making all of these saves,” Scanlon said. “I remember, we were all thinking that the winner of that game, would go on to win the state championship. Lynnfield had some real good players on that team.

In his junior year in 2013, he was 21-3-2, giving up just 18 goals all season long. He had a .931 save percentage, a 1.18 GAA, seven shut outs, was 5-0 in the playoffs, giving up five goals, while posting two shut outs. His nine shut outs that season tied a school record, and that included a brilliant 4-0 white washing of Franklin, once again in the championship game.

“There was definitely a lot more pressure on us that year, because we had brought back a lot of kids from the year before, and we knew expectations for us were very high,” Foley said. “I remember we really wanted to make the Super 8, but we came up just a little short. Then in the first round of the sectional we did not play very well, even though we beat Stoneham. But after that, we played great the rest of the way, and were able to win another title.”

In his senior year, during the Wildcats first season in Division 1, he finished 15-4-7 and faced 703 shots, almost 2.5 times the amount he faced his junior year, and finished with a .936 save percentage, a 1.68 GAA with four shut outs. He was 3-1 in the playoffs, giving up eight goals and had one shut out. Of course, the lasting memory of that season will always be the 11-round shootout loss to Reading in the sectional finals.

“We flew under the radar a little that season because it was our first season in Division 1, but when the playoffs came around, we started to put it all together,” Foley said. “Against Reading, I felt like we were two evenly matched teams, and it was very tough to lose to them, because we really felt like if we had beaten them, we could have won another championship. That one was tough to take because I knew it meant the end of my high school sports career.”

NOT JUST A STAR ON THE ICE

As dominating as he was in ice hockey, he was just as good in soccer. In three years on varsity, the teams combined for a record of 37-12-12, was a part of one league championship title, made three state tournament appearances, losing in the Division 2 and D3 North Sectional semi-finals during his junior and senior years.

Between striker and midfield, he finished his career with 21 goals and 29 assists, was a two-time All-Conference selection, the Middlesex League's Player of the Year, and was a Boston Herald and Globe All-Scholastic. In addition, he was the Town Crier's Male Athlete of the Year.

“I loved playing soccer and I loved playing under coach Scanlon,” Foley said. “That was a fun team to be a part of, because most of us had played together since something like the third grade with travel soccer. By the time we got to our senior year, our former town team was now our varsity team. We were a very close knit team because we had been together so long.”

After high school, Foley continued his hockey career, playing junior hockey with the East Coast Wizards of the EHL, with hopes of one day playing college hockey. Foley however, was taken out of action due to a hip injury, namely Femoroacetabular Impingement, which required several surgeries to repair, and ultimately ended not only his hockey, but also his soccer career.

“It was not a pleasant time for me,” Foley recalled. “I really struggled with it. My entire life I had been surrounded by sports, both for myself and for my siblings. My entire childhood was all about sports and my dream was to one day play college hockey, so I felt like my dreams had been ripped away from me.”

But though it all, Foley has persevered. In high school he had been almost as great of a student as he was an athlete, and once his hockey career was over, he put those skills to work.

Now 23 years old, he might not be playing college hockey, but he is nearing completion of his degree at UMass Lowell, where he is a senior mechanical engineering major. Through it all, Foley knows he would not be where it is today without the support of his family, including his siblings and in particular his parents, Donnie and Cathy.

“I don’t think words can describe just how supportive they were for me, both when I was playing and when I got injured,” Foley said. “Our whole family would always go to each other’s games. That’s just the way it always was. And that continued when I had my first surgery. They were all just so supportive of me. And that includes my aunts, uncles and cousins. They would always come to my games and support me and they continued that support even after my injuries. I am very lucky to have them in my life.”