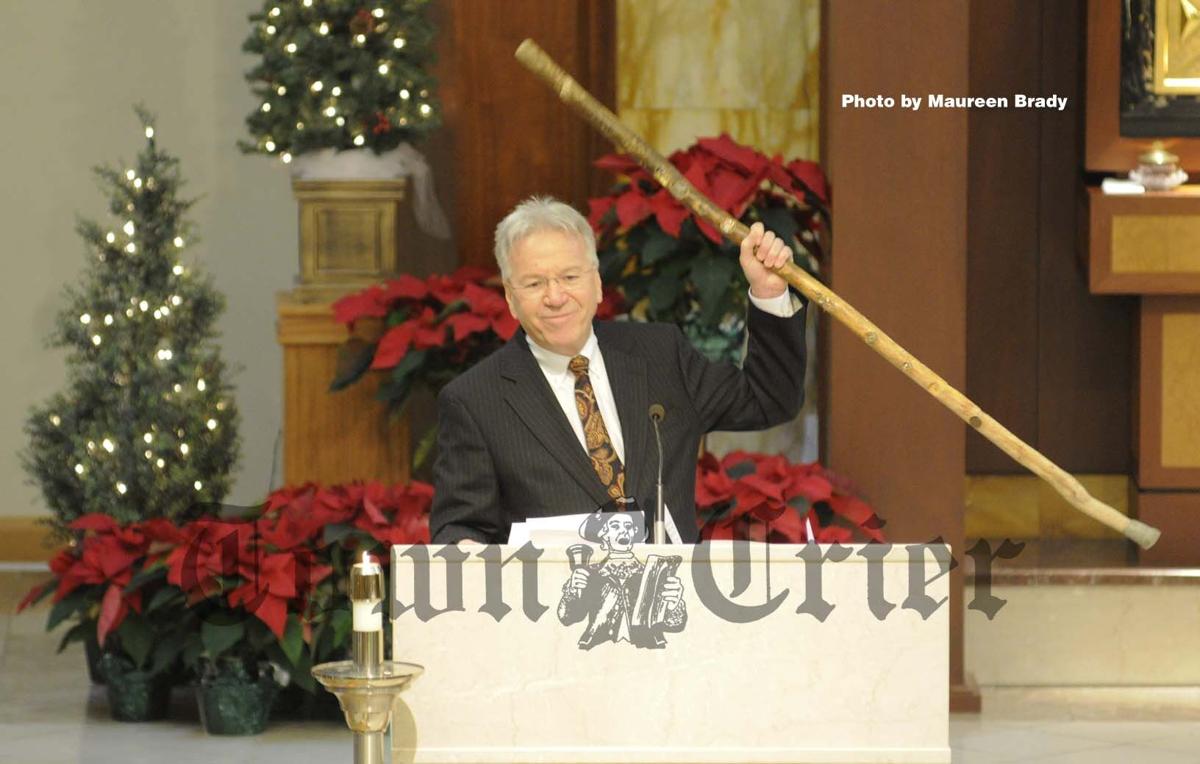 David Boeri used Mr. Kelley’s staff when he gave his heartfelt eulogy for his former teacher and coach during the funeral services held at St. Dorothy’s Church in Wilmington. (photo by Maureen Brady). 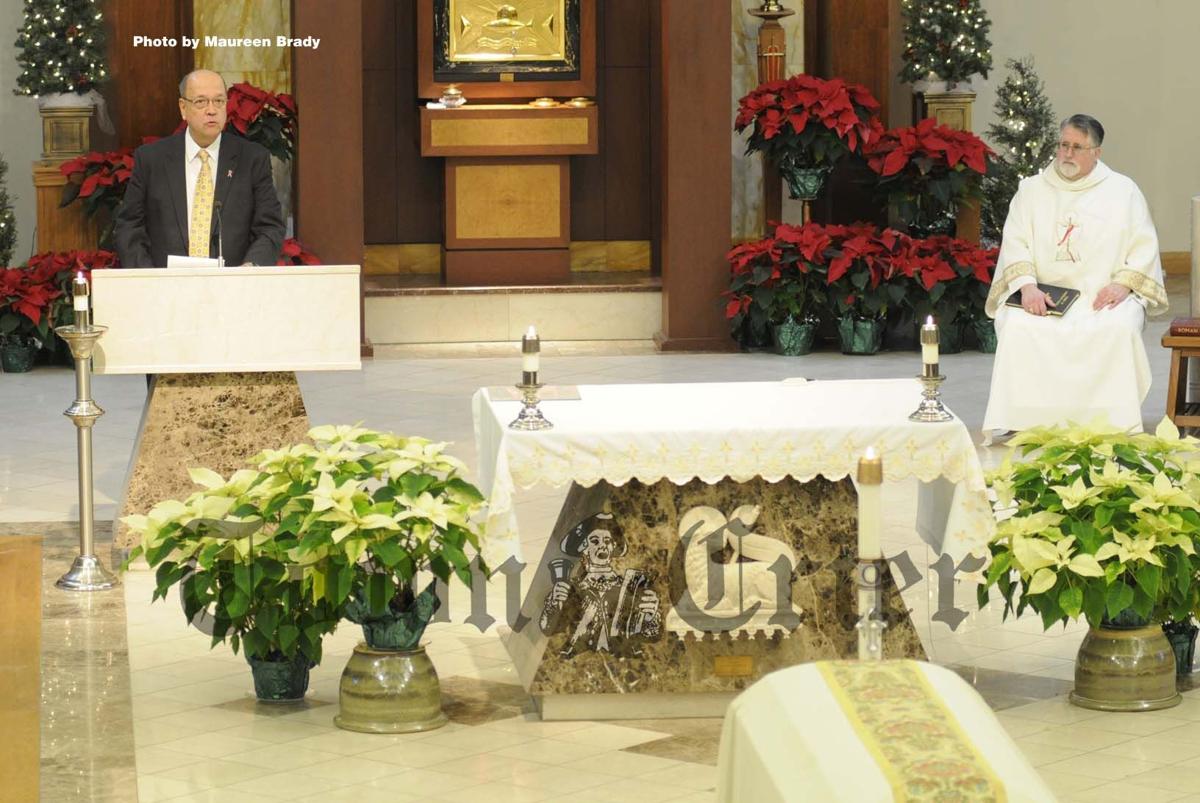 David Boeri used Mr. Kelley’s staff when he gave his heartfelt eulogy for his former teacher and coach during the funeral services held at St. Dorothy’s Church in Wilmington. (photo by Maureen Brady).

This past week marked the sixth anniversary of the passing of the beloved Mr. Kelley. This story originally appeared in the Town Crier in the January 20th, 2016 edition.

Wilmington said goodbye to its adopted son late last week at Saint Dorothy’s Parish, with a two-day tribute reserved for the best and the brightest that this nation has to offer.

Frank Kelley was all that and more. Former students from as far as Washington State came to say thank you and farewell. Jon Meads, Class of 1961, travelled across the country to be there, while current Wilmington High School track coach Mike Kinney brought a bus load of his athletes to honor Mr. Kelley.

There were older students, from Mr. Kelley’s first class in 1957, and much younger students from his last WHS coaching class of 2014. They all represented close to 60 years of coaching and teaching for Mr. Kelley and it was a rock-solid symbol of what Mr. Kelley meant to this community. No matter how old they were, Mr. Kelley always thought of every one of them as his students. He loved them all, and they loved him right back.

It was a town saying goodbye to a man who had a heart to beat the band and of course there was a band prepared to say goodbye. The Wilmington High School Band in their Wildcat Blue uniforms launched into the team fight song as Mr. Kelley’s casket exited the church. Mr. Kelley’s sister Jackie and his many nieces and nephews sat in the first two rows of the church and listened with his extended family as former Town Manager Mike Caira and David Boeri (Class of 1967) delivered moving eulogies.

“To his right is the shot put and to his left is the discus — and there is Mr. Kelley, sitting on his folding chair,” said Caira as he remembered just where Kelley would position himself at a track meet over the years. “That was his home — the field events. Those moments in life, you miss them. He was one of a kind.”

There was a particular inscription on a plaque that Kelley loved, and Caira remembered it. It seemed to him that Kelley thought that it just might be the way to go about living your life. “It said, ‘be reasonable — do it my way.’

Today Wilmington weeps for its adopted son. His passing evokes a bountiful of beautiful thoughts,” said Caira. “Mr. Kelley personified perseverance and positive reinforcement. He was for the underdog, like himself. He was everybody’s coach. The man in the pith helmet with the booming voice and the beaming smile, his was a life well-lived. So many people are left to wonder if they made a difference. Mr. Kelley made a difference.”

Caira then pointed to just where Mr. Kelley would sit during Mass — slightly to the left and to the rear of the church, where there would always be plenty of room to rest his walking stick. There would be several sticks, one it seemed for each occasion. When it was time to go to church, Mr. Kelley made sure to bring his ‘dress’ stick — a beautifully hand-carved number.

David Boeri made his way to the front of the church with that stick in his left hand. Boeri then held that beautiful stick high over his head. It was much more than a prop. It was a symbol — a symbol of exactly what Mr. Kelley brought with him to Wilmington. Boeri sounded the call as if it were a proclamation from another time and place.

“Let’s begin with the stick, the rod, the staff… that’s how we last saw him,” Boeri began. “In truth there were always other sticks in the Frank Kelley collection. The utility sticks, the body-double sticks. But this one… this one is the grandmaster. Looking at that staff I’m reminded of the story of the young Arthur who would one day be king. You remember the prophesy. ‘Whoso pulleth out this sword from this stone is right wise King born of all England.’ Well, who amongst us can lift this stick?” Boeri asked.

“In Frank Kelley’s hand, it looked big enough to part the Red Sea. Indeed Mr. Kelley was part Moses, part Gandalf, and even a little part Mr. Natural. He was a prophet, a punster, a teacher and a coach, a stinker and a pillar.”

Boeri, like everyone attending what was a celebration of Mr. Kelley’s life, had a particular memory that he cherished. His eulogy included one such memory.

“Mr. Kelley spent a lifetime cheering for underdogs and exhorting his students to do their very best. It didn’t matter whether you were first or last. He was cheering you on. I can remember his big, booming voice across the field while I was running the quarter mile. ‘C’mon Davey.’ Even if you didn’t cross the finish line first, in Kelley’s world, you were competing against yourself to better your own personal best and true victory was in that.

“That’s why this church is so full or people who have come so far. This is a gathering of the clan Kelley, where so many of us are united in a simple conviction of four words: Mr. Kelley changed my life.”

Boeri then left his best Mr. Kelley story for last. It was the real-life tale of a young woman with a disability. Mr. Kelley loved to challenge students to reach beyond what they thought they were capable of achieving.

“He was a talker. Stories… he had a few… a few thousand. They were parables of hard work, optimism, good cheer. The one I never tired of listening to was the story he told of a young student who said she couldn’t run. She had a disability she told Mr. Kelley, who told her she could run, which might seem like an audacity for anybody else to say. She agreed to try, and slowly he built her confidence and her conditioning. He promised her a reward if she could finish the junior varsity course of less than two miles in less than 24 minutes. A modest challenge it might seem. On the day of the race, as Kelley told the story, she finished in 23 minutes and 50 seconds, just 10 seconds under the limit. Of course she finished last. But she was the first runner to cross the finish line on a wooden leg.”

“When Mr. Kelley gave her the jersey that was her reward, it read: ‘Pain is temporary. Pride lasts a lifetime. Glory is forever. Go for the glory.’ Boeri then channeled his teacher Mr. Kelley. Even in death, Mr. Kelley was present to provide a teaching moment for this Friday morning.

“So I asked you, who is going to carry that stick?” Boeri paused and raised the stick one final time before it is preserved forever in a place of honor at Wilmington High School.

“And the answer is we will all carry it. All of us who believe, like our teacher and coach, in the potential of every student, of every person and invest our faith and hope and love in helping to fulfill that potential.”

The service would appropriately include hymn number 378 — “Here I am Lord.” There was the “Prayer of Saint Francis”. People quietly wept.

The Wilmington High School band played one final time for their beloved teacher and coach. Mr. Kelley’s time on this earth will surely be remembered. The casket was carried just in front of a small gathering of young people. The band had stopped playing. No one was weeping. There were smiles. A final goodbye had gently turned into a celebration of a life well-lived.