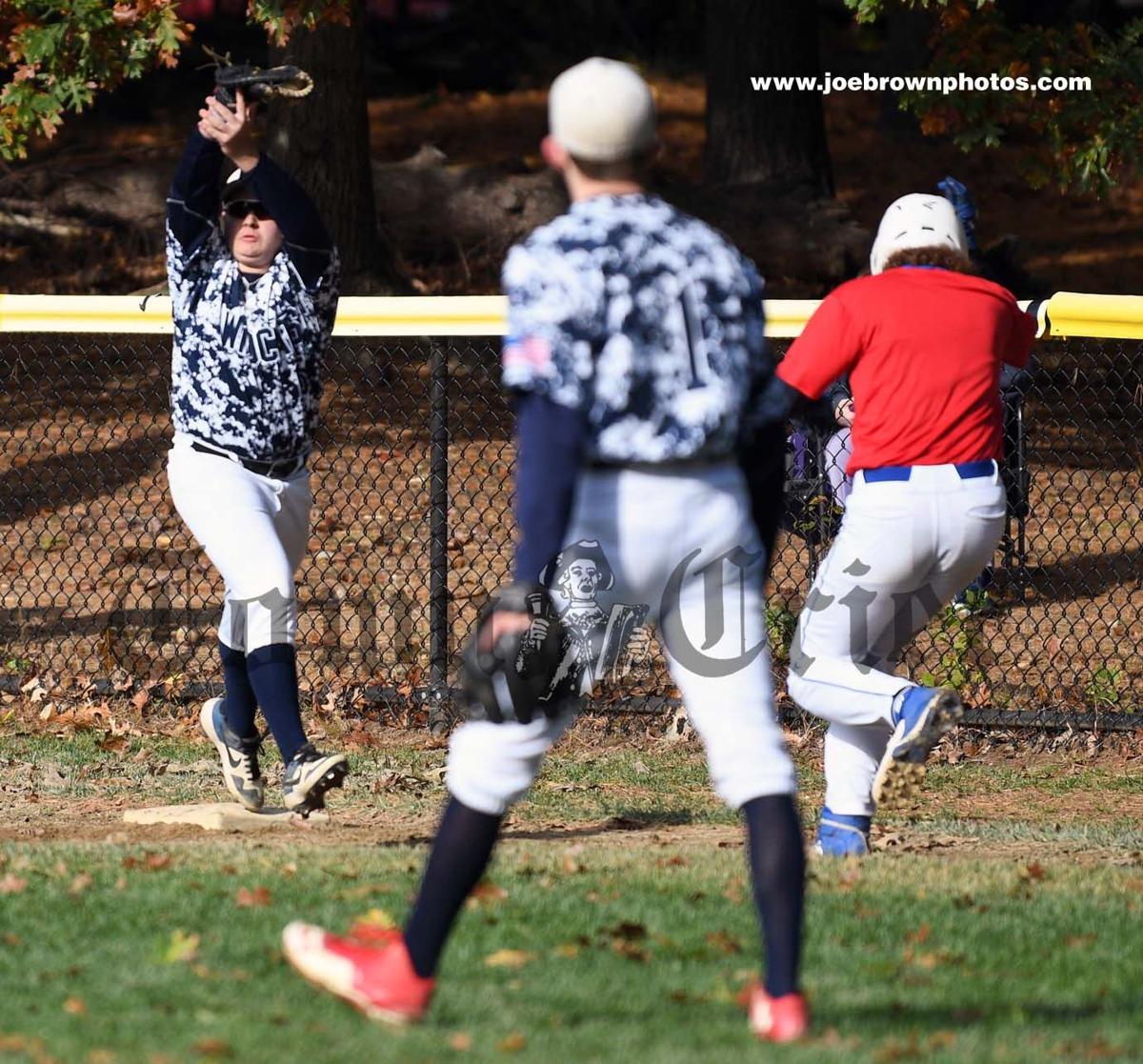 Wilmington’s Brian Curdo makes the stretch and put out at first base on Tewksbury’s Cody LeGrande during a recently played Fall Baseball game between the two towns. (photo by JoeBrownphotos.com). 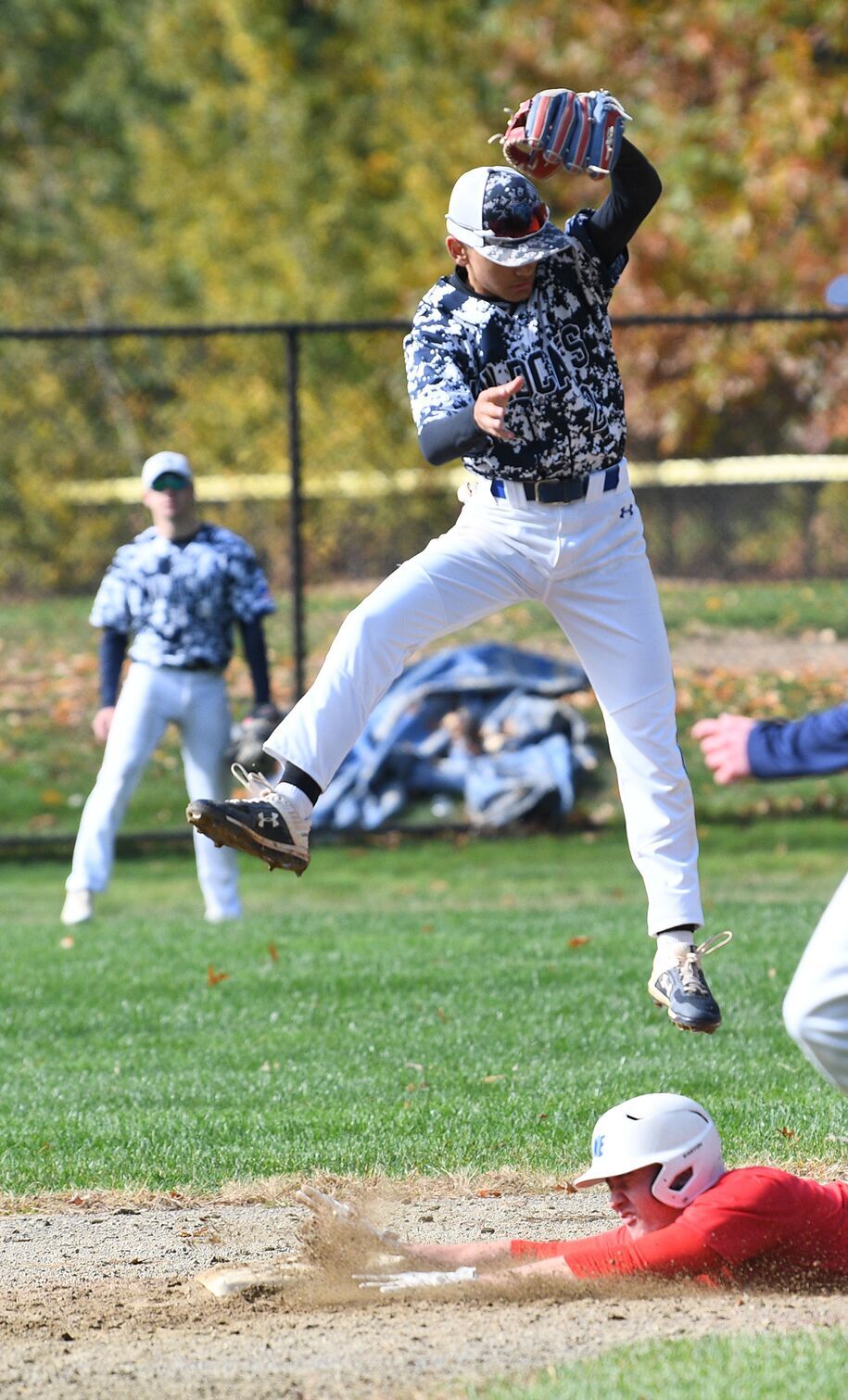 Shortstop Jake Roque comes down with the ball, but not in time as Tewksbury’s Michael Duggan slides into second with a successful stolen base during the recently played game. (photo by JoeBrownphotos.com).

Wilmington’s Brian Curdo makes the stretch and put out at first base on Tewksbury’s Cody LeGrande during a recently played Fall Baseball game between the two towns. (photo by JoeBrownphotos.com).

Shortstop Jake Roque comes down with the ball, but not in time as Tewksbury’s Michael Duggan slides into second with a successful stolen base during the recently played game. (photo by JoeBrownphotos.com).

WILMINGTON — In arguably their most complete effort of the season, Wilmington’s Fall Ball team finished off the regular season with a 9-1 victory over Greater Lowell in Tyngsboro.

“We kept the train going [all game], didn’t let the foot off the gas, it was great,” said coach Marc Gallucci.

All of the scoring for both teams was done in the by the end of the fourth inning.

The scoring started in the top of the first inning; Greater Lowell would take a 1-0 after their lead off hitter singled, advanced to second on a groundout stole two bases, and scored on an error by Wilmington catcher Nico Piazza.

The Wildcats responded in a big way in the home half of the first inning.

Drew Gallucci got the inning going with a single. Nico Piazza, Derek Gallucci, and Jimmy McCarron all walked, scoring Drew Gallucci from third base, tying the game at 1-1.

Garrett Moretto followed that up with a single, scoring Piazza from third, giving Wilmington a 2-1 lead, and it was an offensive explosion from there.

Joey Dynan, who was tabbed as starting pitcher for this game helped out his own cause with an RBI single, scoring Derek Gallucci, extending the lead to 3-1.

Matt Vinal walked to score McCarron, and Jack Toomey and Nate Packer put the ball in play to drive runs home, and before you knew it, the score was 6-1 after one inning.

In the top of third inning, after a Nico Piazza single, Derek Gallucci singled, Jimmy McCarron walked, and Dynan singled again, scoring Piazza to give Wilmington a 7-1 lead.

Jack Toomey and Brian Curdo added runs in the bottom of the fourth to extend the lead to 9-1.

That was all Wilmington pitching needed, as they slammed the door the rest of the way.

Dynan went the first three innings, the most of any starting pitcher for Wilmington. He only gave up one unearned run and one hit on the day, while striking out two Greater Lowell batters.

After a rocky performance early on in the season, Jimmy McCarron bounced back big time in his last few games including Sunday. In his two innings of work, he didn’t give up any runs on two hits, one walk and three strikeouts.

“Everyone top to bottom threw hard and hit their spots, couldn’t have been happier and asked for better,” said Gallucci.

He was really proud with how his team competed all fall season, and believes the future is bright for Wilmington High School baseball.

“Going into the next high school season, we’re going to be really strong going forward, our pitching is going to be solid, and our corners are filling in nicely,” he said.

Wilmington did not qualify for the playoffs.