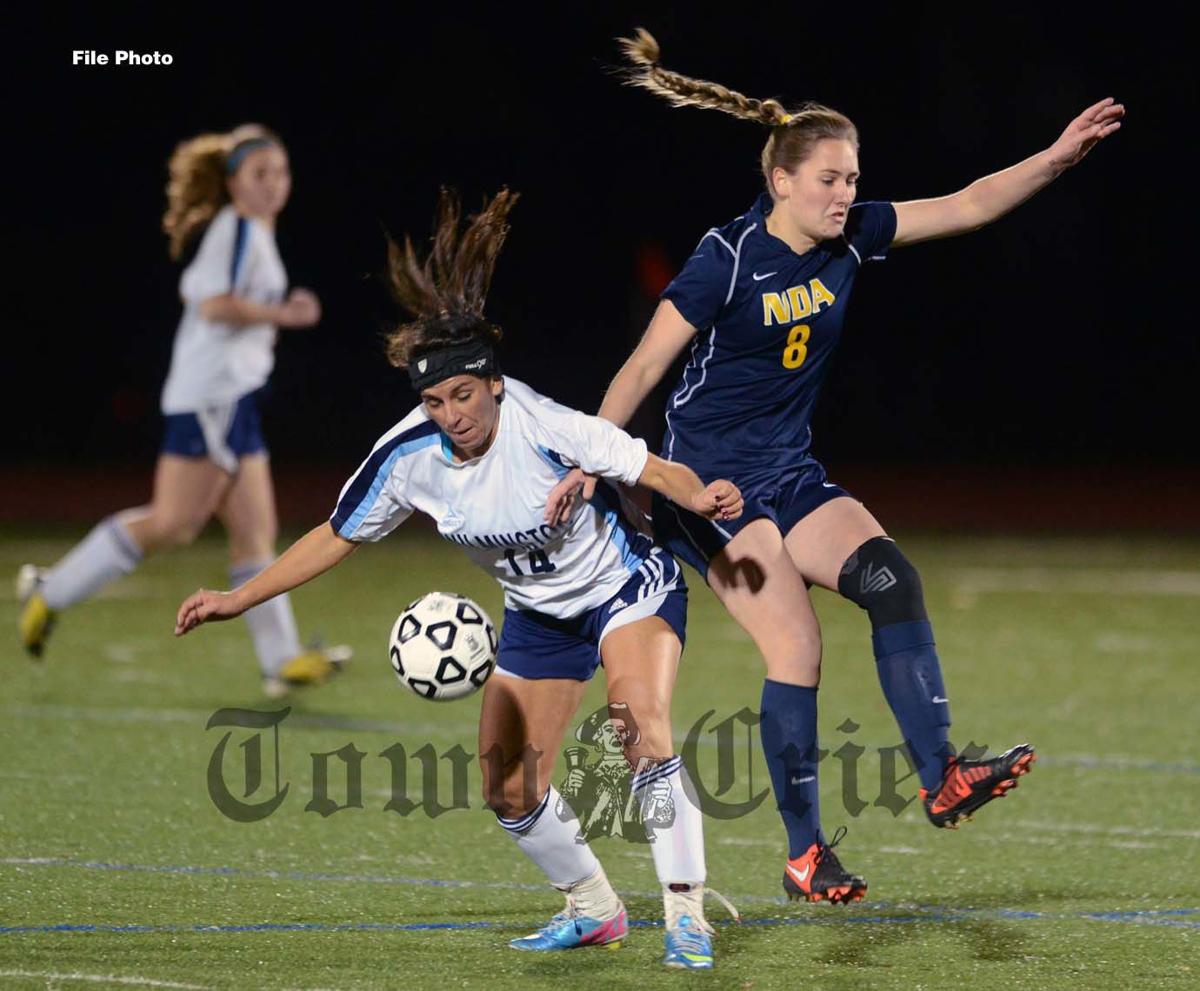 In 2013, Kaitlyn Curley was one of the big reasons why the WHS Girls’ Soccer team advanced to the Eastern Mass Division 2 championship game (no state title game for D2), losing a heartbreaking overtime game decided by penalty kicks to Notre Dame Academy of Hingham. Curley is one of the selections to the Girls Soccer All-Decade team. (file photo). 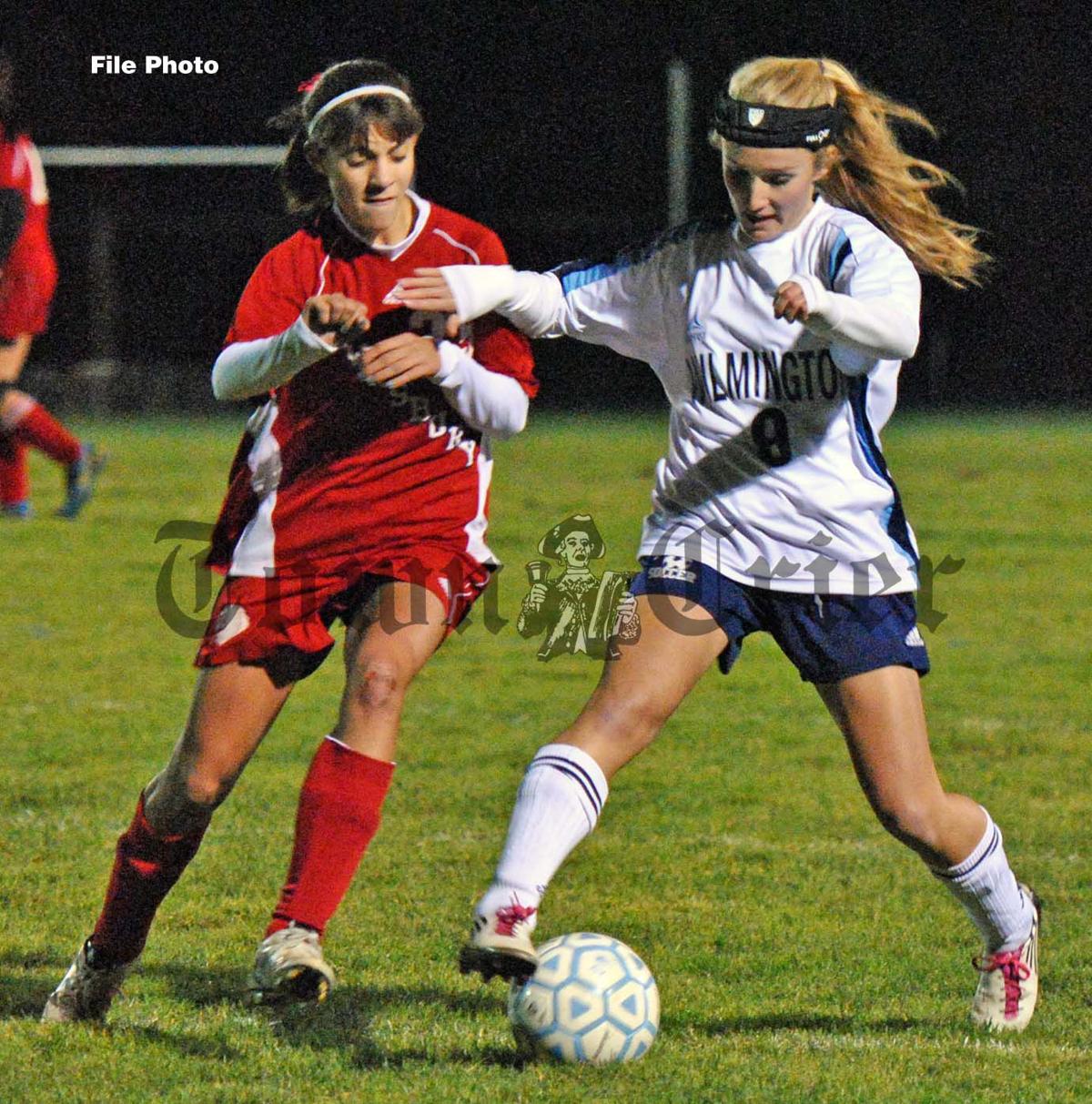 Among those selected to the Town Crier All-Decade WHS Girls’ Soccer team is Holly Niemiec, who was an outstanding midfielder for the ‘Cats. (file photo). 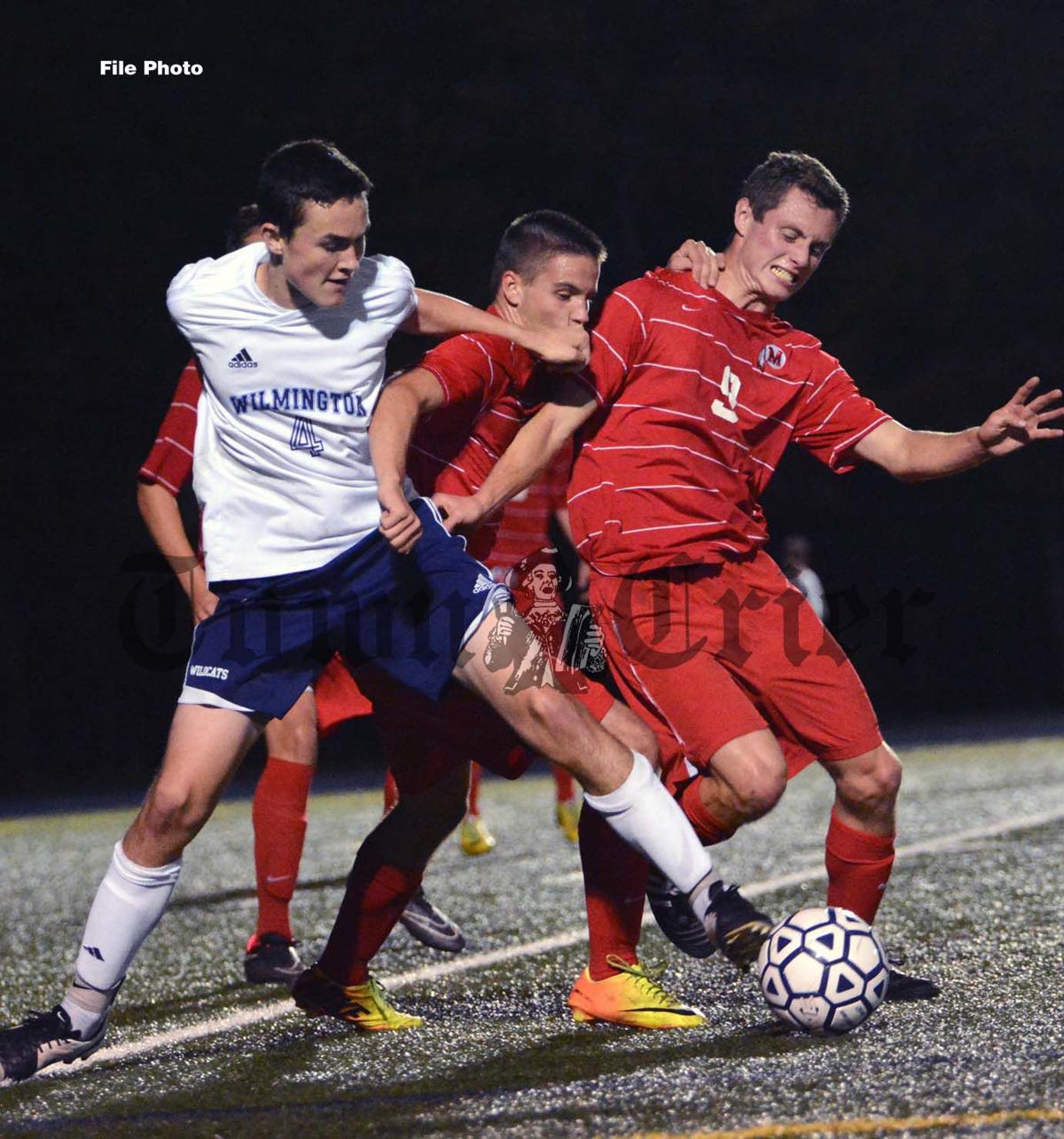 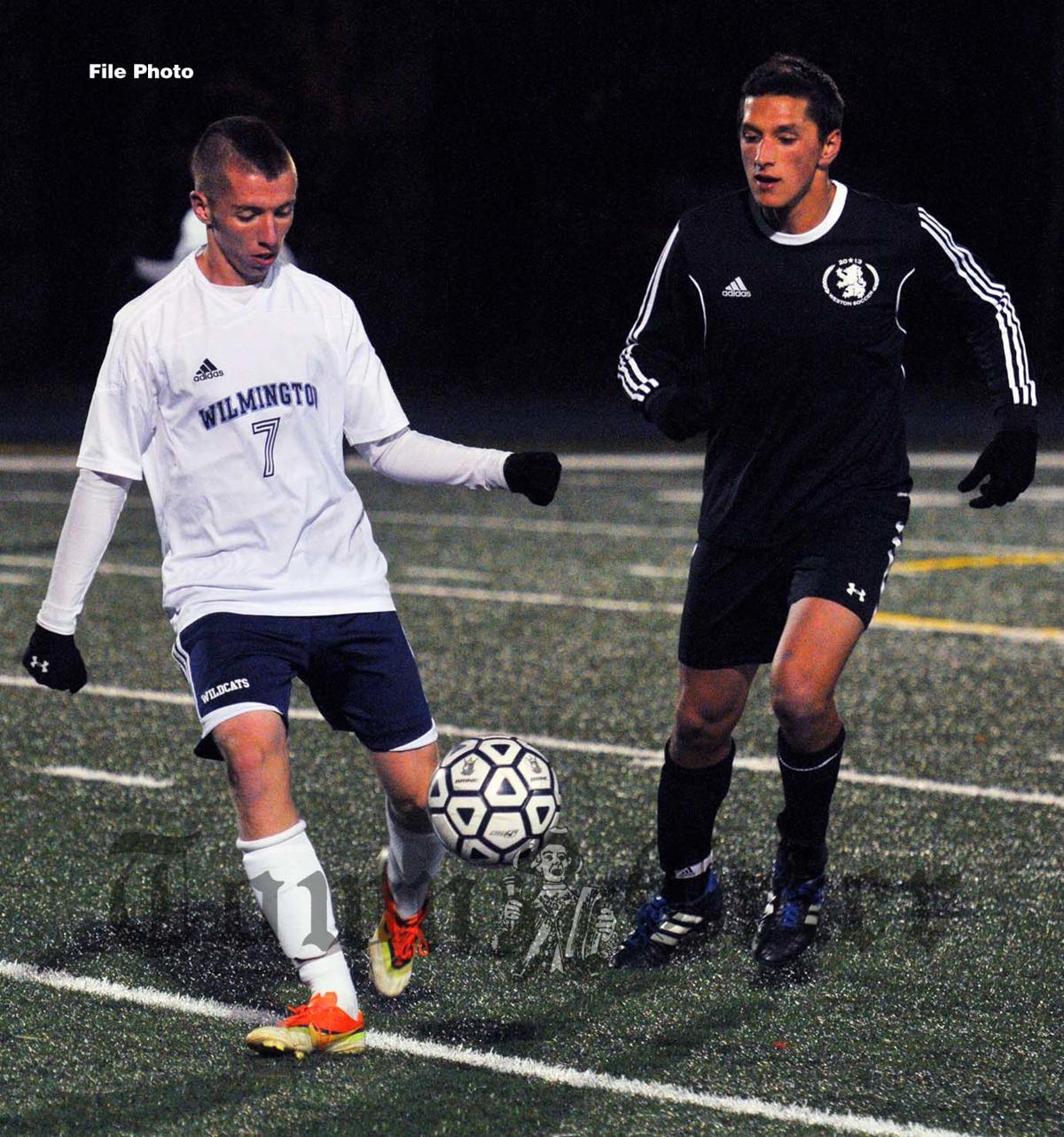 In 2013, Kaitlyn Curley was one of the big reasons why the WHS Girls’ Soccer team advanced to the Eastern Mass Division 2 championship game (no state title game for D2), losing a heartbreaking overtime game decided by penalty kicks to Notre Dame Academy of Hingham. Curley is one of the selections to the Girls Soccer All-Decade team. (file photo).

Among those selected to the Town Crier All-Decade WHS Girls’ Soccer team is Holly Niemiec, who was an outstanding midfielder for the ‘Cats. (file photo).

WILMINGTON – Excluding the newly formed co-op/co-ed swim team, Wilmington High School offers eleven varsity female athletic programs which are sanctioned by the MIAA. Of those eleven, by far, the most successful one this decade was the girls' soccer team. And outside of the back-to-back state champions from the boys hockey team, the soccer program ranks second of all 22 programs for the decade.

Wilmington finished the ten years with a combined record of 128-44-28. Take away 2010 and the record is 125-34-24. In the ten years, the team came away with a Division 2 Eastern Mass (no state championship game in D2) finalist trophy, a Division 2 North Sectional Finalist trophy, while losing another time in the sectional semi-finals and making nine straight playoff appearances starting in 2011.

In the decade, the Wildcats played a total of 20 state tournament games and six were decided in overtime or penalty kicks. In 2013, the 'Cats beat Danvers, 2-1 in overtime, topped Arlington, 2-0, beat Concord-Carlisle, 2-1 in penalty kicks to capture the program's first ever sectional title, before losing the thrilling 3-2 contest in penalty kicks to an incredibly talented Notre Dame Academy of Hingham team for the Eastern Mass Championship title.

Besides that great run in 2013, the year before Wilmington was defeated in the sectional final by league rival Belmont, 1-0. Wilmington defeated Marblehead (1-0), Wayland (2-1, PK's) and Hamilton-Wenham (2-0) to get to Manning Field.

Goalie: Kellie Souza – In 2015, she capped off an incredible career which included 40 shut outs and was named to the Eastern Mass All-Star team. That season, she gave up just six goals all season and posted 14 shut outs. She's the only goalie in the history of the program to help lead the team to a North Sectional title and an Eastern Mass Finalist trophy. She went on to play four years at Bridgewater State University.

Defense: Aly Colantuoni – She finished up a four-year career with the 'Cats this past fall, where she was named to the Middlesex League All-Star for the second straight year, a Lowell Sun First Team All-Star as well as to the Eastern Mass All-Star team. She could attack from the back with the best of them, finishing with four goals and four assists in 2019.

Defense: Devyn Malatesta – During her junior year, she was named the Middlesex League Freedom Division's MVP and was also named as an Eastern Mass All-Star and to the Division 2 All-State team. The year before she was also a league and Lowell Sun All-Star. She went on to play four years at Salem State University.

Defense: Christina Spinos – She was as consistent as they come. She was a four-year starter and had a terrific career. In 2015, she was named a Middlesex League All-Star for the third straight year, an Eastern Mass All-Star and was also named to the Division 2 All-State Team. She went on and had another terrific four-year run with Worcester State.

Midfielder: Kaitlyn Curley – In my opinion, she was the reason behind a lot of the success this decade. She drove the bus and turned things around. In 2013, she was named the Middlesex League Freedom Division MVP, was also named to the Eastern Mass and All-Star teams, while leading the team to the Eastern Mass Final. A four-year player, with tremendous talent, skill and speed, she went on to a terrific career at Salem State University.

Midfielder: Dana Goulet – Always a very steady, consistent player, who had a high IQ for the game and that never stop hustling mentality. She really emerged as a top player during her senior year, especially controlling the middle of the field. A four-year player. she led the team to a league title and was named a Middlesex League, Lowell Sun and Eastern Mass All-Star, finishing that season with 15 points. She is currently enjoying a fantastic career at Bentley University.

Midfielder: Holly Niemiec – By far the most consistent player throughout the entire decade. You always knew what you were going to get every game out. In 2012, she finished with five goals and ten assists and was named the Lowell Sun's Player of the Year, as well as a two-time Middlesex League and Eastern Mass All-Star. She went on and had a great career at Ithaca College.

Midfielder: Kayla McCauley – In the history of the program, there's only a selected few players who have gone on to play at a D1 college and she's one of them. McCauley was a four-year player, with tremendous speed, skill and most of all creativity with the ball at her feet. The team went 69-5-8 with one league loss during her four years. She was a three-time league all-star and also named to the Eastern Mass and Division 2 All-State teams.

Forward: Alex Bischoff – She is now a 3-for-3, making it to the TC All-Decade team in indoor and outdoor track, as well as soccer. She makes this one because she could find the back of the net, a lot. One of the more natural goal scorers the program has ever had.

Forward: Casey McFall – She too was an offensive threat whenever she touched the ball and was a big reason behind the team's success, especially in 2014 and '15. Like several others, she went on to play at Salem State University.

Forward: Olivia Wingate – It's fitting as you save the best for last. The Town Crier's Female Athlete of the Decade, who is now playing at Notre Dame University, only played 1.5 years and will go down as the best player in the history of the program. In 2016, she was named to the Lowell Sun and Eastern Mass Player of the Year, as well as making it both the Division 2 All-State and New England teams. By far the fastest player I've ever seen on a high school soccer field.

Back in December, Steve Scanlon was named the Town Crier's Coach of the Decade for the second straight time. In the write-up for his soccer teams, it was said that it was a tale of two halves in this decade, the first, in terms of wins and losses, much better than the second. In 2014, the Wildcats qualified for the state tournament for the tenth straight year under Scanlon, but have not gone to post-season play since.

Over the course of the decade, the Wildcats finished 79-75-37, made five state tournament appearances and reached either the Division 2 or 3 sectional semi-finals three times. In the first five years, the team had a combined record of 59-21-21, but over the last five years the team has a combined mark of 20-54-16.

In 2013, Wilmington was dropped down to D3 and had a first round-bye, before beating Weston 2-0 and then falling to Bedford, 1-0, in the sectional semi-finals to finish 17-3-1. The following year, the team finished 11-4-6 overall, including a 2-1 win in penalty kicks over Bedford, a 1-0 win over Weston, before losing 2-1 in penalty kicks to North Reading.

Goalie: Luke Foley – Pure instincts, not sure I've seen anyone better and Wilmington has had some great goalies in the past. In 2013, he registered 13 shut outs — giving him almost 40 in his career — had a GAA under 1.00 and ended as a two-time league all-star.

Defense: Kory McGilvary – As dominating of a shut down defender the program has ever had. Extremely talented with the ball, he had a great run between Wilmington High and Westfield State University.

Defense: Chris Michelangelo – He was used at both defense and midfield, and on set plays, he would float to the front of the net. Every year, Scanlon would preach about battling for the ball inside the '18-yard box and Michelangelo was very good at that, accounting for many goals. He was a big reason for the team's great runs, especially 2012.

Defense: Evan Raffi – The way he played, epitomizes old school WHS soccer. Just hard-nosed, tough, strong on the ball and would never come off the field. A former TC Male Athlete of the Year, his best season came in 2014 as both a Middlesex League and Lowell Sun All-Star.

Defense: Connor Townsend – He had the weapon of being able to throw the ball basically across the field, but he was also instrumental in the back, part of a great group along with McGilvary and others. The two of them, along with fellow first team selection Jimmy Murphy, went on to have successful collegiate careers at Westfield State.

Midfielder: Colin Doherty – Another former TC Male Athlete of the Year, Doherty was extremely dangerous on the soccer field. In 2012, he was named the Middlesex League Freedom Division MVP as well as an Eastern Mass All-Star after finishing that season with nine goals.

Midfielder: Drew Foley – Named the Town Crier's Male Athlete of the Decade in December, he had a sensational career on the soccer field which included being named the Middlesex League Freedom Division MVP, an Eastern Mass All-Star and a two-time league all-star. He finished his senior year with 6 goals and 10 assists, helping the team win 17 games.

Midfielder: Nick Godzyk – Only his senior year counts here, but the impact he had on the field certainly puts him as one of the best. He finished that season with 6 goals and 11 assists, while being named to the Cape Ann League All-Conference team, as well as to the Eastern Mass All-Star team.

Midfielder: Ryan Kinsella – A real skilled player, who was deadly on the free kick, Kinsella was really went under the radar especially during the '14 season. He went on to a fine career at Worcester State University.

Forward: Jimmy Murphy – Off the field, he would always crack me up, on the field, he could crack the ball past goalies, finishing with 24 career tallies. He, like previously mentioned, went on to play at Westfield.

Forward: Andy Owens – Like Godzyk, Owens only has the one year, but in that 2010 season, he finished with 13 goals and 10 assists, coming in 19 games. He was named to the Cape Ann League All-Conference team, while helping the 'Cats reach the post-season.