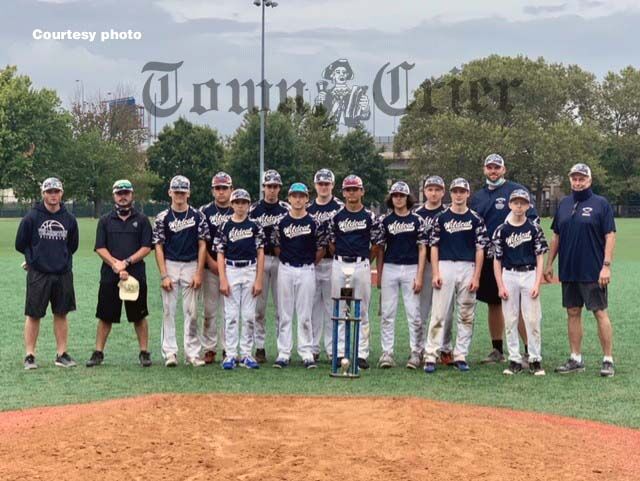 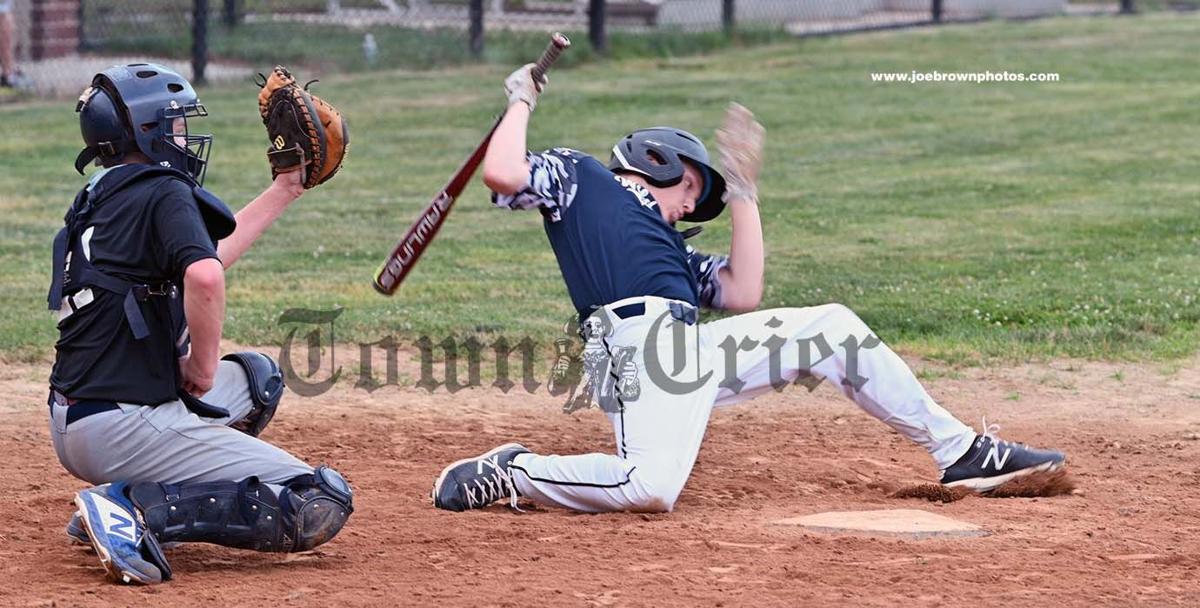 Patrick Hounsell slips as he backs away from a very inside pitch as Watertown catcher Patrick Cacace catches the ball during an earlier LTA game held this summer. (photo by JoeBrownphotos.com).

Patrick Hounsell slips as he backs away from a very inside pitch as Watertown catcher Patrick Cacace catches the ball during an earlier LTA game held this summer. (photo by JoeBrownphotos.com).

EAST BOSTON — Last Thursday evening, soon after the LTA Wilmington U15 baseball team dealt Natick a 4-0 shutout defeat and advanced to the playoff semifinals, a number of the players were heard to say, “We want Woburn — bring on Woburn.”

There’s a popular adage that warns to be careful what you wish for because you might just get it.

In Sunday night’s season finale, Wilmington did, in fact, have the opportunity to face rival Woburn in the Lou Tompkins Division B Championship but it was Woburn claiming the title with a decisive 9-4 win.

“We took one on the chin this afternoon,” said Wilmington assistant coach Rick Hill who joined his son James in leading the Wildcats to a 13-4 overall record this summer. “Unfortunately, we were playing without our full roster, although that’s never an excuse. But we were playing pretty even until the fifth inning when the floodgates opened.”

Hill was referring to a number of uncharacteristic defensive lapses that led to five runs for the opposition. Wilmington was unable to answer.

While the Wilmington defense has been reliable throughout the summer, this team truly thrived at the plate. The early playoff contests were a testament to that. After suffering a 5-3 loss to Natick in the opening round last Wednesday, the Wildcats came back the next day, with their backs against the wall in an elimination game, and roughed up visiting North Andover, 13-1, in a mercy rule abbreviated finish.

“In that first playoff game with Natick, we weren’t finding the gaps,” explained Coach James Hill. “We were putting the ball in play but we were hitting it right at them and their defense was making the plays. Our energy was low and we were trailing the entire game. But with North Andover the next day, everything started to click for us, especially in the third.”

Hill was referring to a six-run inning in which Wilmington batted around the order and enjoyed hits from John Velozo, Burke Zimmer, Patrick Stokes, and Jacob Roque, who lashed a one-out double to the left field fence to get them started. The Wildcats repeated the effort with another half-dozen tallies in the sixth before the officials ended the siege.

“I’m certainly not griping about the win,” said Hill. “Rather than scoring in bunches like we have lately, I’d rather see the offense spread evenly throughout the game.”

If anything has been a constant for this Wilmington club, it was controversial plays and the ensuing arguments. During the hectic third inning with North Andover, for instance, Michael Maselli was ruled safe at the plate when he leapt to avoid a collision with the catcher who missed the tag. The North Andover coaching staff vehemently argued that, by rule, the runner is required to slide to prevent injury. Coach Hill disagreed, pointing out that his player successfully avoided an impact. The officials briefly discussed and the call stood as a run scored.

But perhaps the most disgraceful quarrel took place during the bottom of the first inning in Thursday’s rematch with Natick. Moments after Roque led off with a loud triple to center, the Natick coach called for a timeout to confer with the officials. He claimed that Roque’s bat was unsanctioned. After examining the bat and referring to a cell phone, on which the Natick coach had been kind enough to reference the league regulations, Roque was ruled out. Hill and his players, needless to say, were incensed.

“It wouldn’t be my first reaction after a kid gets a great hit to say that he must be using an illegal bat,” Hill said. “This isn’t a mainstream league like high school, where everyone is aware of the minuscule rules. It wasn’t like he went up there and intentionally used an illegal bat.”

Much like Wilmington fed off the negative energy of the opening round playoff loss and pounded North Andover, the silly bat size dispute fueled a third inning outburst with Natick. With hits from Shane Costello, Burke Zimmer, Roque, and Maselli, the Wildcats put up four runs, proving sufficient enough behind a topnotch pitching performance from the crafty Matt Ardito.

“Ardito did an awesome job pitching in that game,” Hill said. “He threw about 10-12 pitches every inning and he was throwing strikes which usually puts the ball in play and then it’s just a matter of trusting the fielders to make the plays.”

There was never a dull moment with this team. Moving on to Watertown for Saturday’s semifinals, the Wildcats were forced to deal with yet another questionable call that led to a setback. As assistant coach Rick Hill explained, the stringent mask wearing policy at the Watertown facility resulted in an unintended miscue.

“With a Watertown runner on second base, our pitcher was in the set position and ready to deliver when his mask slipped off his face,” he said. “He moved his hand out of the glove to restore the mask and the officials signaled a balk. It moved the baserunner to third and he soon scored on a sacrifice fly.”

The Wildcats, however, had been down this unfair road before and responded with equal parts pitching, offense, and indignation. Behind the talented pitching tandem of Lars Ostebo and Roque, Wilmington kept Watertown at bay and ultimately went on to carve out a 5-1 win and advance to Sunday’s fateful final with Woburn at Memorial Field in East Boston.

Assistant Coach Hill explained the reasons behind the Wildcats’ insistence in facing Woburn in the championship game, despite the obvious hazards.

“When we first played them this season, the game was interrupted several times by lightning,” he recalled. “During one of the delays, when we were trailing by just a run, several of their AAU players arrived and were added to the roster.”

As Hill explained, these added “big guns” contributed to a five run surge, eventually leading to a 9-7 Woburn win, despite a valiant Wildcat rally. At the tail end of July, Wilmington easily outpaced their archrival, 15-10. In defeat, the Woburn coach was less than a good sport, sarcastically hollering, “We’ll see you in the playoffs.”

Once all the posturing and bravado was behind them, the teams got down to the business of baseball. From the outset, it didn’t go well for the Wildcats. They trailed 3-0 after the third and then yielded five more in the fifth as a result of some spotty defense behind pitchers Zimmer and Ardito, both who threw well. The Woburn lead proved insurmountable and the season came to a disappointing end.

“There’s a great deal of baseball talent in Wilmington, proven by the recent success of our U15 team and the Northeast club, along with the high school teams over the past ten years,” Hill said. “Our involvement was triggered by the lack of spring baseball due to Covid-19. These kids missed their baseball and myself, James, Connor Zaya, and Graham Smith sought to fill that gap in some way. I believe we succeeded.”