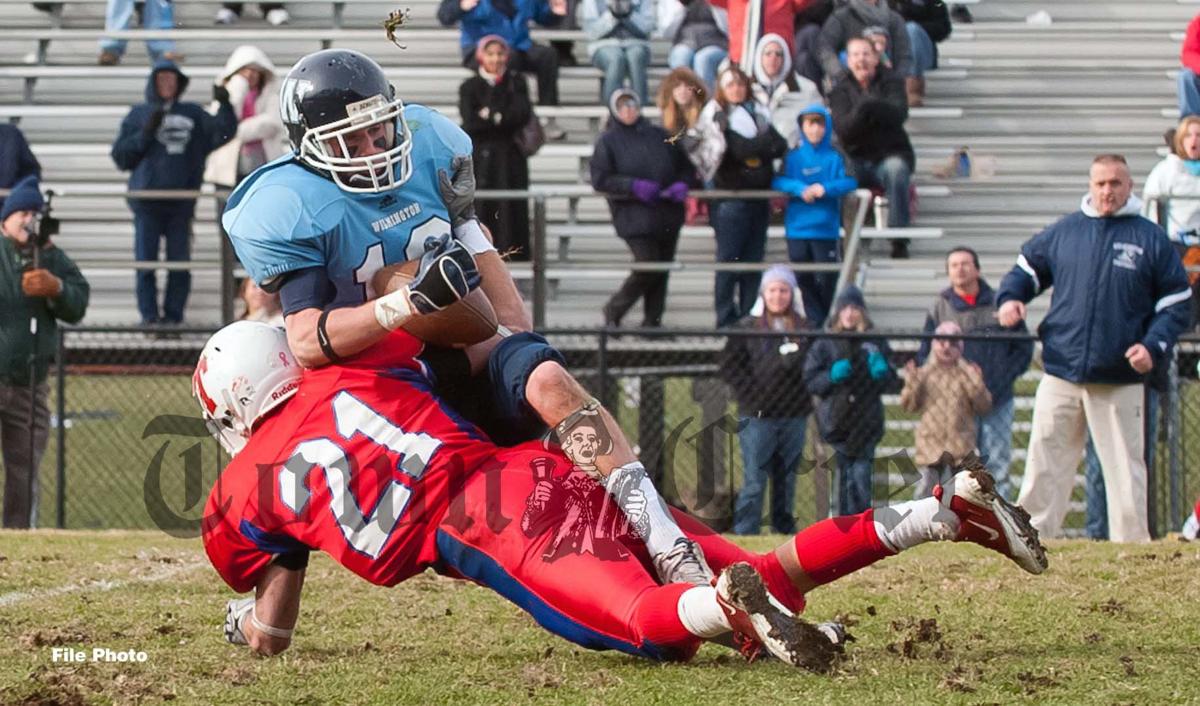 Chris Frissore, shown here making a catch and getting tackled during the Thanksgiving Football game of 2010, has been the All-Decade Team as a wide receiver. (file photo). 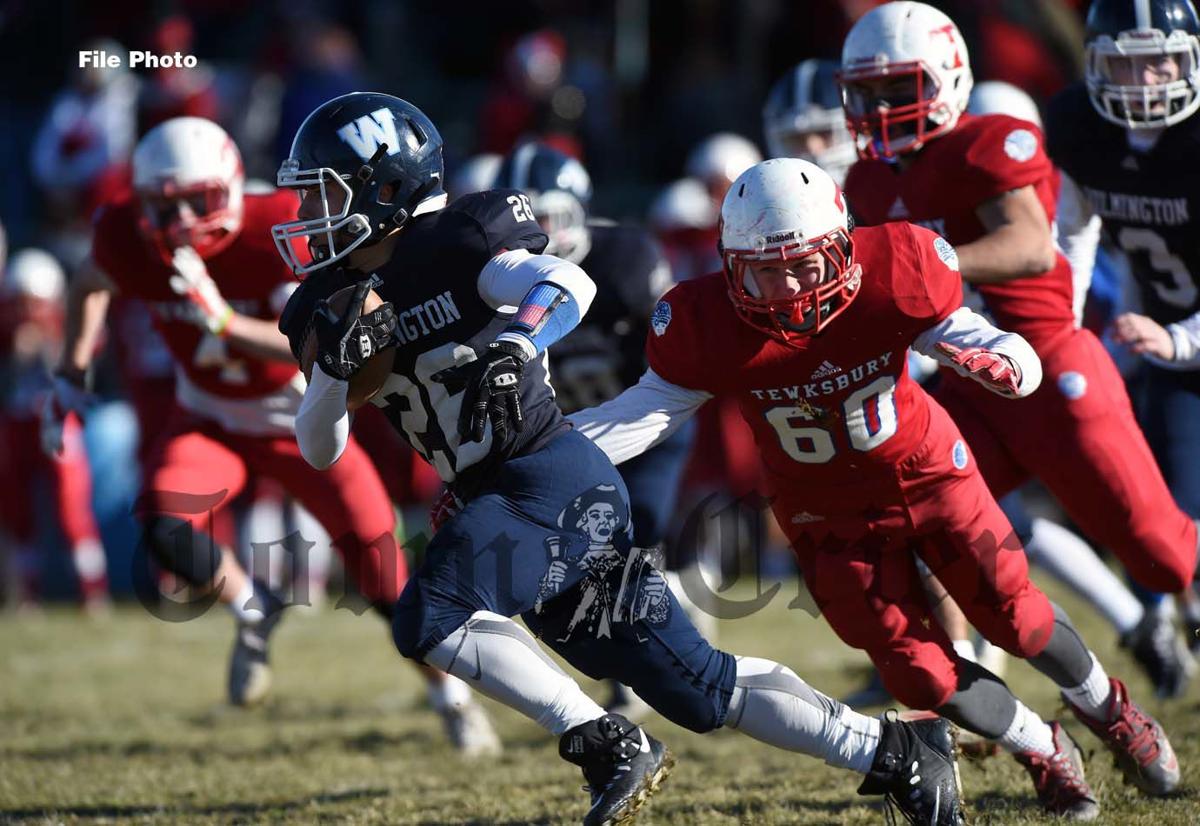 John Kenney provided a lot of highlights while running the ball during the magical 2017 WHS Football season. He is among the 11 players selected to the First Team Offense for the All-Decade Football team. (file photo). 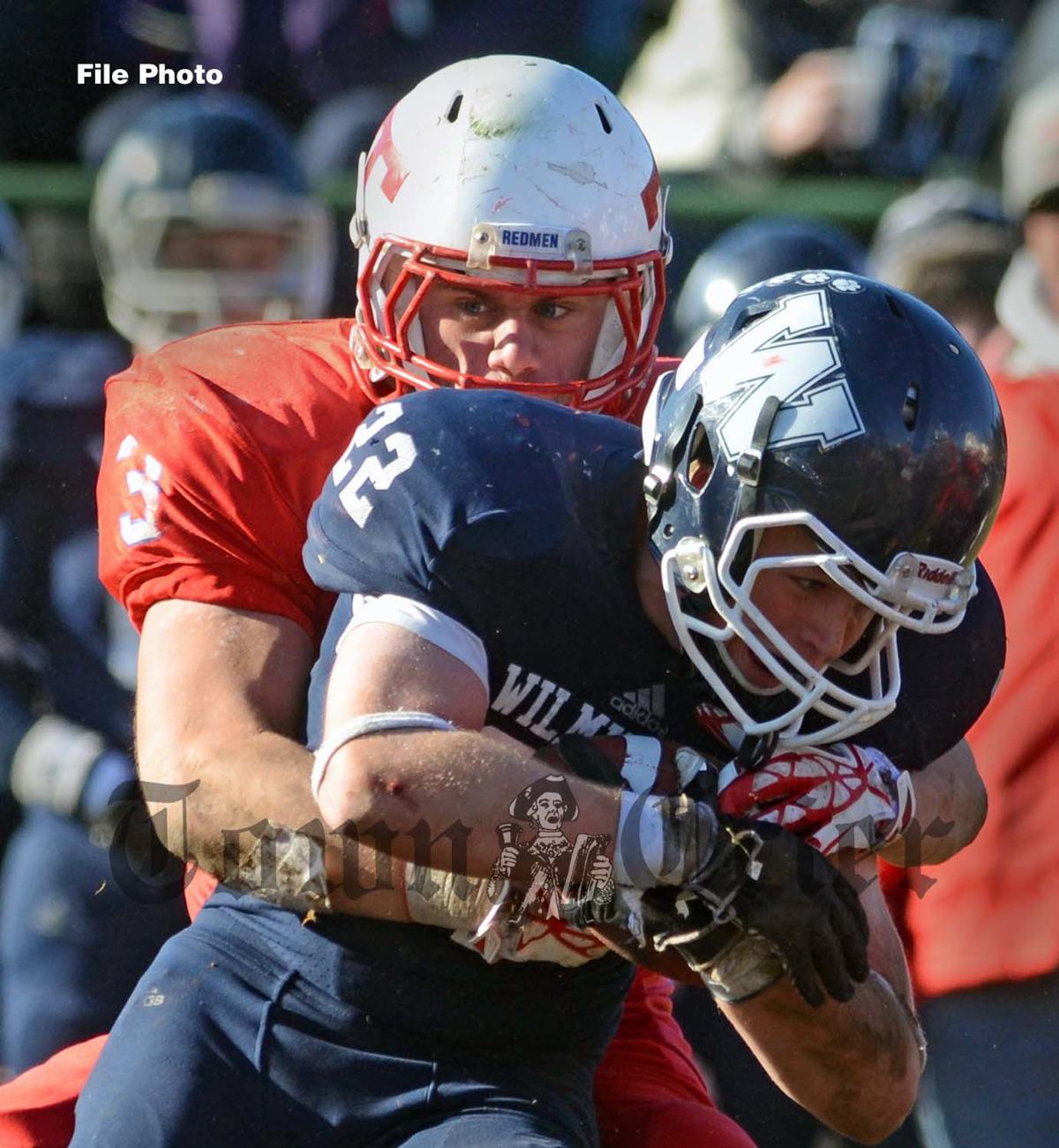 During his football career at WHS, Matt Penney was a versatile player, especially running the ball. On our All-Decade team, he would line up as the fullback. (file photo). 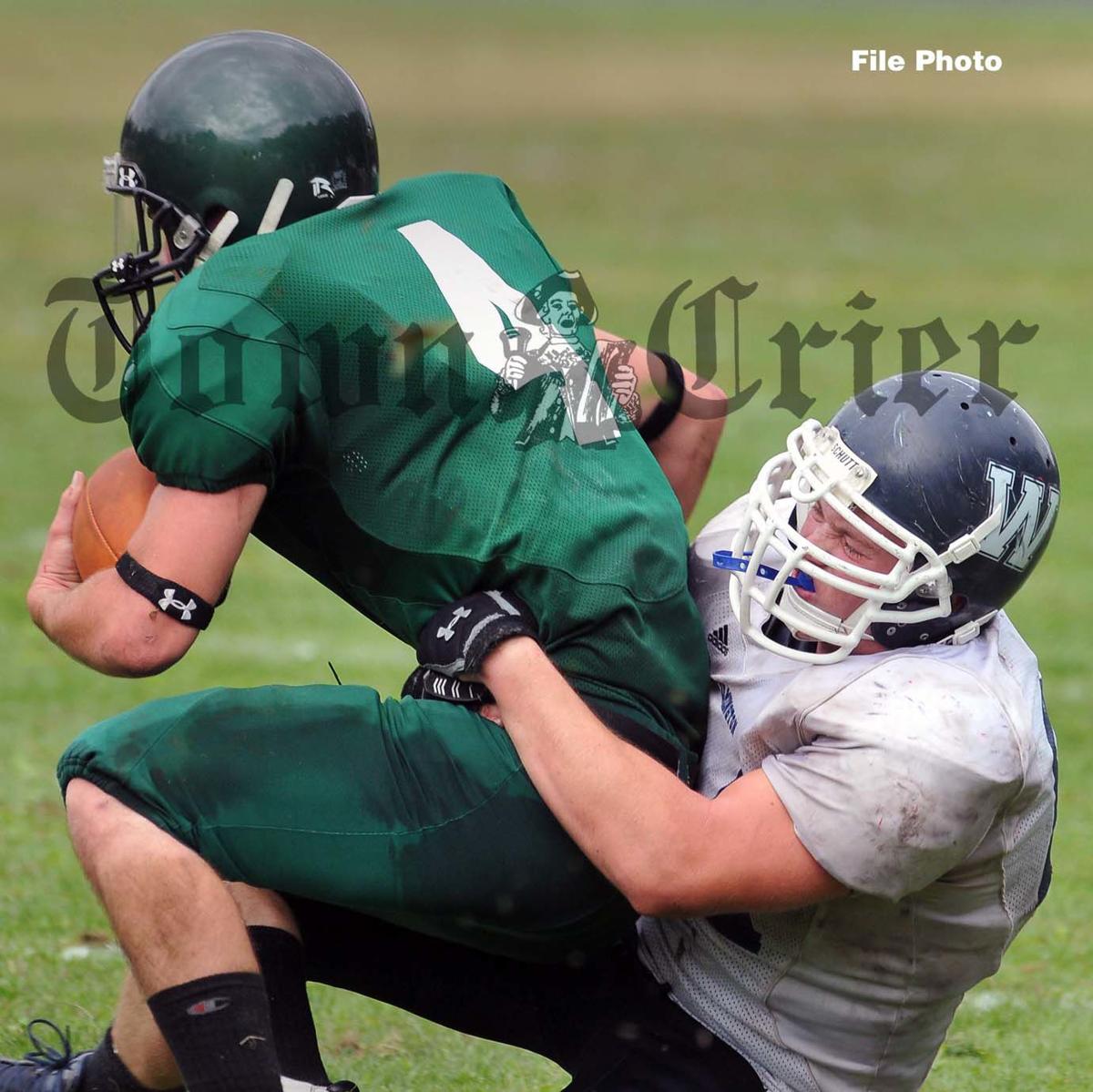 Gordie Fitch, shown here making a tackle during a win over Austin Prep from the 2010 season, makes our All-Decade Team as an offensive lineman. (file photo).

Chris Frissore, shown here making a catch and getting tackled during the Thanksgiving Football game of 2010, has been the All-Decade Team as a wide receiver. (file photo).

John Kenney provided a lot of highlights while running the ball during the magical 2017 WHS Football season. He is among the 11 players selected to the First Team Offense for the All-Decade Football team. (file photo).

During his football career at WHS, Matt Penney was a versatile player, especially running the ball. On our All-Decade team, he would line up as the fullback. (file photo).

Gordie Fitch, shown here making a tackle during a win over Austin Prep from the 2010 season, makes our All-Decade Team as an offensive lineman. (file photo).

WILMINGTON – This marks the 15th All-Decade Team that we have put together at this point and by far, not even close to any of the others, this was the most difficult team to put together.

I say that for many reasons – first of all the TC split the coverage of the team throughout the decade between myself and Mike Ippolito, so neither of us saw all of the kids. Secondly, the Wildcats played under two coaches, in two leagues, which extends the difficulty and in the first seven years the team was primarily a running team so stats never jumped out at you. Next, through all ten years, the team was decimated with injuries so trying to make the pieces fit with solid, veteran players on these teams, was nearly impossible.

And finally, the team's best seasons were 2010 and '17, and the former squad was excellent but a handful of those guys have just one year of eligibility and the '17 team also had a few guys with previously played with other high school programs.

That being said, we elected to change things a bit on this team. With all of the other WHS All-Decade teams, we said the criteria was the athlete must have stayed through the program for all four years. We eliminated that rule for the football team only.

Again all of the picks were made by me.

QB: Graham Smith – He was the starter for one year and it was the best season in program history since the MIAA changed its playoff format. He finished that season with 1,250 passing yards and 16 TDs, as well as almost 300 rushing yards and three more scores, while leading the 'Cats to an 8-3 record, and its first playoff win in program history.

Smith, who is making his third appearance on these decade teams, is playing baseball at Franklin Pierce University.

RB: John Kenney – Also only eligible for one year after transferring over from Central Catholic, he was something special every time he touched the ball during that 2017 season. He finished with over 1,100 yards and 14 TDs, and also added 200 receiving yards and another score. He was named to the Middlesex League and Lowell Sun All-Star teams.

He is currently playing at Endicott College.

RB: John Moriarty – A third player who is only eligible for his one season, but was a real good one. He helped the 2010 team finish 8-3, while rushing for 1,100 yards and scoring 10 touchdowns as part of a terrific three-member offense with QB Sean Hanley and fellow RB John Parsons.

FB: Matt Penney – He split time between running back and fullback and also shared carries, but really put together several fine seasons. In 2013, he rushed for almost 450 yards with two scores and then in 2014, he finished with 900 yards and six scores. On this team, he would be a fantastic fullback for Moriarty and Kenney.

WR: Chris Frissore – His stats will never jump out, but he could certainly catch the ball, make big plays and in addition, convert several field goals. He combined with teammate Brian Hurley for 700 yards and seven touchdowns in 2010 as part of that eight-win team.

He went on to play at Curry College.

TE: Brian Hurley – In terms of his size, strength and athletic ability, Hurley is up there with the best of them. He was extremely versatile on both sides of the ball and a very good blocker as a tight end. He combined with Frissore for those stats. He went on to be a lineman at Merrimack College and had a great career, including playing before NFL Scouts at the National Bowl Game.

C: Brendan Ahern – A two-way starter on the line for three years, Ahern had a real solid career. In 2010, he played center and had a fine season for the 8-3 club, before switching to guard the following two seasons.

OL: Gordie Fitch – In 2010, he capped off a strong career as a two-way lineman and captain for the 8-3 club. Defensively, he played several positions, but offensively, he was at tackle and helped create holes for a talented backfield that consisted of Hanley, Moriarty and Parsons.

OL: Alex Furlong – After making it on our Wrestling Decade team, Furlong is back here on the football team. He was known to be just a gritty two-way lineman, who was consistent and served as a captain. He was named a Lowell Sun second team All-Star that year in his junior season of 2010.

OL: Kyle Nelson – A three-sport athlete and three-sport captain at WHS, Nelson was another mainstay on both the offensive and defensive lines, especially in 2015. He is currently a member of the Fitchburg State University track team.

OL: David Woods – You sometimes run into a kid "who gets it" and Woods certainly falls into that mold. Just a super kid, who worked extremely hard in all sports, was tough, scrappy and would do anything for his teammates and team.

He was a two-way player as an offensive lineman and linebacker, serving as a captain on the 2016 team.

DE: Tyler Roberts – The tought of having Roberts and Parsons together on defense would certainly make any high school coach ecstatic. Roberts could play anywhere, offensively or defensively. I thought he dominated the most as a DE. In 2017, he was named the Middlesex League's Player of the Year after having 118 tackles, including 26 for a loss.

Roberts, who made our All-Decade Lacrosse team with three (not 2) team MVP trophies, is currently having a terrific collegiate career at Merrimack College.

DE: Kyle Kenyon – Whenever I saw him play, I just saw loads and loads of potential. Injuries kept getting in the way but when he did play, he was pretty special as a DE and as a wide out in the newly designed offense when Turner came on board. In 2017 and '18, he was a Lowell Sun second team selection on defense.

DT: Ryan Flood – At 6-foot-2, 215 pounds, Flood was described by Coach Barry as a "powerful run blocker" on the defensive line, Flood was a two-time Middlesex League All-League selection as well as a Lowell Sun All-Star for the 2014 season. He also played on the offensive line.

DT: Dean Nally – Extremely versatile on both sides of the ball, Nally had a real nice career for the 'Cats, ending this past fall. He battled his share of injuries, but no one can take away his heart and toughness on the field. He was named as a Lowell Sun second team selection this past year and was an honorable mention selection the year before.

He will continue to play football at Bentley College this fall.

LB: Austin Ferreira – Known for his devastating hits as a middle linebacker, Ferreira had two really strong seasons for the 'Cats in 2013 and '14. A captain, he was named to the Lowell Sun second team in '14 and was honorable mention in '13.

He could also run the ball, with 1,400 yards and 15 TDs as a senior. He had a brief career at Southern Connecticut State.

LB: Bailey Smith – A savvy veteran on the defensive side the last few years, Smith was tremendous this past year, finishing with 114 tackles, while being named to the Middlesex League and Lowell Sun All-Star teams. Last year as a junior, he was a Sun second team selection.

He will be playing at Curry College starting this fall.

DB: Ryan Carroccino – A captain on the 2013 team, Carroccino was a two-way player as a running back mostly on offense, and then was a defensive back for several years, including free safety as a senior, coming away with a handful of interceptions.

He went on to play at Western New England College.

DB: Matt Ferreira – He is more known for his skills at QB, including 13 combined TDs as a senior, but that same year, he emerged as a real solid contributor in the defensive backfield with 75 tackles.

In 2019, he was named as a Specialist of Athletic Training at the University of Connecticut.

DB: Sean Hanley – One of the better all-around players of the decade, Hanley was named to the Cape Ann League All-Conference team as a DB in 2010, after finishing the season with 45 tackles and five interceptions. He was also superb as a QB that season with 1,100 passing yards and 10 TDs, including that monstrous game against Austin Prep.

He went on to play at Worcester State.

DB: Matt Woods – A real solid athlete and a real solid two-way player, who really had some stellar games on both sides of the ball. In 2015, he was named an All-Conference selection after making 87 tackles on the defensive end, while he also contributed offensively with 700 rushing yards and four TDs.

He went on to play baseball at WPI.