Ellianna Chrinopoulos competed in her first cross-country meet on Saturday helping the Wildcats come away with a thrilling win.  (Courtesy photo/Amanda Stasiowski). 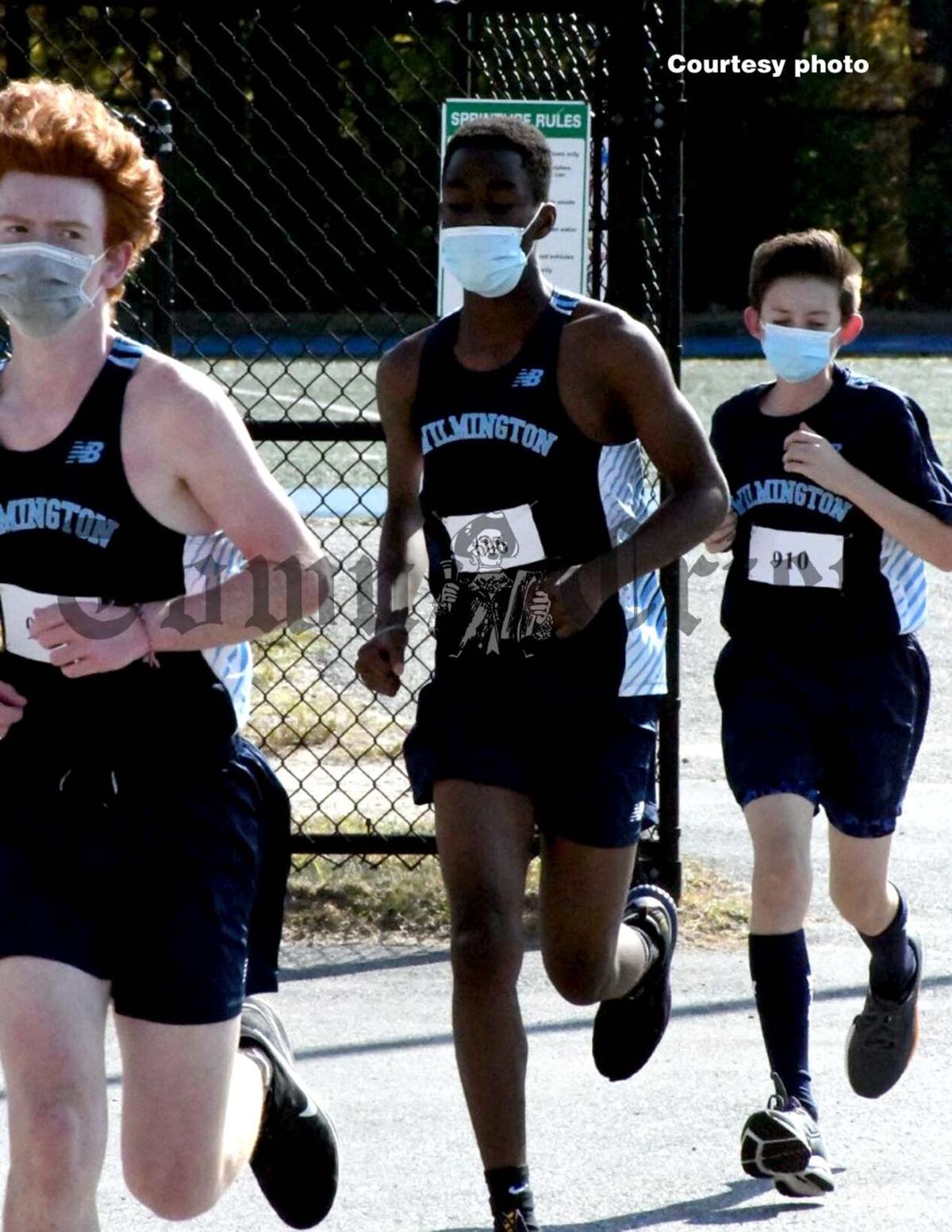 On Saturday, the WHS Boys Cross-Country team competed against Burlington with from left, Jameson Burns, Tobe Amakor and Dave Dynan giving it their all. (Courtesy photo/ Amanda Stasiowski).

Ellianna Chrinopoulos competed in her first cross-country meet on Saturday helping the Wildcats come away with a thrilling win.  (Courtesy photo/Amanda Stasiowski).

On Saturday, the WHS Boys Cross-Country team competed against Burlington with from left, Jameson Burns, Tobe Amakor and Dave Dynan giving it their all. (Courtesy photo/ Amanda Stasiowski).

BURLINGTON — And this is why in the sports world — especially in cross-country — everybody counts.

On Saturday, the Wilmington High School girls' cross-country team edged out Burlington, 27-28, in a very exciting meet. Wilmington had five of the top ten finishers including second, third, fourth, eighth and tenth and had one of those girls been passed near the finish line, the 'Cats would have been on the other side of the exciting season opener.

“Burlington every year has been a tough opponent and close meets every time. Last year we beat them by two points, this year we got them by one. To have them for our first meet and come away with a win is a great feeling to see in the team and getting back in action,” said WHS coach Brian Schell.

With a relatively young team, Schell was impressed with the way his team handled everything — between this just being the second meet of the season and the fact that this was not an easy course.

“They have a tough course with two big hills that definitely take its toll on you right in the middle of the race and it showed in everyone's splits,” said Schell. “However the downhills played a big roll for the girls finishing strong in the race as they all ran their last mile faster than the second. Some even had their last mile the fastest which is awesome.”

Eighth grader Addison Hunt was Wilmington's top performer as she came in second overall with a time of 21:11.

“She had a great first race for herself given the circumstances. She went out strong and took the lead, held it for a mile and a half and then fought side by side with Burlington till about 300-meters left. She looked good for what I was able to see but it seems we just misjudged the hills on the course. The quick pace early and the tough hills did not give her quite the strong finish to get the win but something to take away from and learn moving forward,” said Schell.

“Hannah Bryson also had a great race and was one of two girls to run their last mile as their fastest split,” said Schell. “It was great to see her progression at the two mile mark of the race. She didn’t' over relax and get too comfortable which allowed her to pull ahead of the pack. She held off two girls the entire race to snag a huge eighth place finish.”

“Overall it was just great to see the girls racing again and of course, seeing their excitement when they heard we won,” said Schell.

“We knew the boys team is a strong team and with us rebuilding, this season is more about getting these younger guys experience. Aside from the loss though we had some solid performances from the young guys which is great to see,” said Schell.

Sean Riley was the team's top performer as he was second overall at 16:28.

“He looked comfortable the entire race and sitting on Burlington's top runner James Johnson,” said Schell. “He did not seem to show signs of trying to really push or dig deep especially at the end of the race. But overall definitely a great start for him and only 8 seconds off his own course personal record.”

“Jameson Burns is another freshmen who I see has had a great race for himself,” said Schell. “It was tough for the new guys this meet as they were stuck running alone as the Burlington team out distanced themselves from our guys early. He managed pretty decent splits combined overall and even ran his last mile faster than his second which is a sign of finishing strong as well. Having that strong finish for a first timer is a big asset to have and something to work on.”

“For a seventh grader this was a really solid performance from Dave Dynan as well. I can already see the resemblance in his older brother Joe. His overall splits were fairly consistent and I always say is one of, if not the biggest thing to have as a runner. Another solid performance with having no one to pace with except his teammates.”

This weekend (day and time not official as of presstime), Wilmington will take on Wakefield.

“Wakefield is one of the best we run against for both teams so we have some more work and should be a nice opportunity for the younger guys to work together during the race,” said Schell.