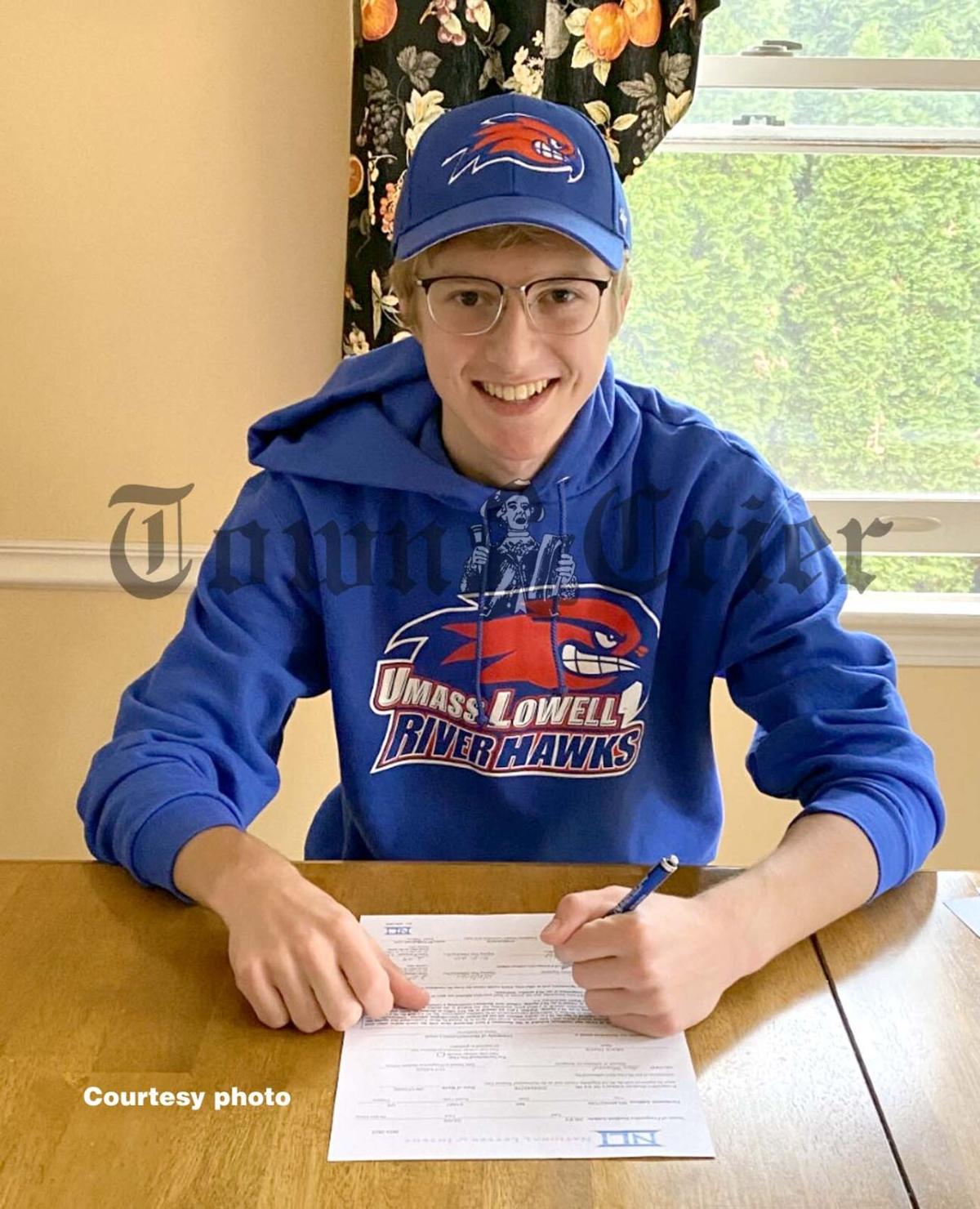 WILMINGTON — Back on Tuesday, November 24th, the Wilmington High School Athletic Department held its National Letter of Intent Day outside behind the backstop of the baseball field. Three senior athletes were honored on this special day, being joined by their families, friends, teammates and coaches.

Back in early October, the Town Crier featured Riley and at that time he had yet to decide about his plans after WHS. After officially signing on to become a River Hawk, he said he still can't believe that he's going from a Division 4 high school program to a Division 1 collegiate program.

“It really just felt surreal,” he said of the NLI Day. “It didn't feel like it was happening and I'm not completely sure it's set in yet. I've been posted on the team Instagram and I've sent direct messages to a few of the guys on the team as well, and that's helped me realize it's not really a crazy dream, and I'll actually be running with these guys in a few months.”

One of the stronger 600 to 1,000 meter runners in the Middlesex League and really Eastern Mass, Riley was the No. 1 runner for the cross-country team over the last month-plus of the abbreviated season. During that season, he was contemplating his options and elected to stay fairly local and be part of an absolutely phenomenal UML program.

“I purposely didn't look at the school for a while because my Mom went there, and I thought that I had to be different or do my own thing,” said Riley. “Then, funny enough, former WHS runner Steve Halas, who attended and ran for UML reached out to one of the coaches of the team Zach Nelson because he saw some of my recent training and thought I'd be worth looking at. They emailed me, so I figured hey why not give it a shot, so I gave the school a look for the first time and really loved it, defying my own expectations. I toured it unofficially with one of the current guys on the team who's in the business school which I'll be joining, and that sealed the deal. I emailed coach (Gary Gardner) the next day with my acceptance of his offer and here we are.

“The school itself fits my wants and needs pretty perfectly, as I've never had any need to go super far, and it has my intended major. I'd like to go to graduate school after my undergraduate career, and they offer a great five-year MBA program which I can see myself pursuing. Even if I don't end up doing that, I'll have a lot of flexibility after undergrad because of the in-state tuition.”

This past February, Riley finished second at the D4 Eastern Mass Meet in the 1,000 meters and throughout his career, he has been on a number of successful/school record relay teams. He is elated to be part of a UML program that already has a long list of incredible athletes.

“UML has had a crazy amount of success since moving up from Division 2, and the team is really talented. In fact, they had two guys make NCAA cross-country nationals in 2019, and they'll probably make it as a team next season. The coaches have proven to be the real deal, and to be surrounded by people who've had and will have success. It's a hard-working, goal oriented environment and I believe I'll thrive.”

Gardner was asked what he expects from Riley, “We hope Sean brings a runner with a large upside. He seems to have made big strides in his fitness since March. His dedication to getting better during a tough time for everyone was what impressed us the most.”

“I have been fortunate to coach Sean all four years in cross country. Since freshman year he has excelled greatly in both cross country and track. I think his decision to continue his athletics at UMass Lowell is great. Sean is definitely a hard worker both during and out of season. His hard work and dedication to the sport has paid off with numerous accomplishments during his high school career.

“I can see through his drive and earning those, is just one of many things he will bring to the table at the next level. He reminds me of a tall Steve Halas, who also committed to UMass Lowell, with great speed and strength to excel at any race regardless of distance. I see many similar attributes in him as I did Steve and I know Sean will carry those going into college.

“Cross-Country might be more of a gateway for Sean and used to stay in shape heading into the track seasons. However he is a goal oriented individual and I have no doubt whatever those goals he sets his sites on moving forward that he will do whatever it takes to focus and reach them.

“Despite an unfortunate and short cross-country season this year for him, he has put a lot of work in during the down time. It simply shows his passion for the sport and to have seen it grow over these years is what makes it awesome. Knowing that he is continuing to run in college is one thing that really makes me happy and for him. Hopefully one day I will even get to see him compete.”

Back in May, the Town Crier featured DuCharme, who at that time verbally agreed to attend Bentley University to play basketball.

"There was a lot I liked about Bentley," said DuCharme back in May. "I loved the campus and I would be getting an amazing education. With basketball, I just thought everything was great. I would be playing for a great program with amazing coaches and players."

Now DuCharme has made it official by signing her NLI.

“I was super happy, it was great to be able to do it at the school. It felt awesome to finally sign, I’m so grateful for the opportunity,” she said.

She was asked what she has been working on over these last few months.

“I’ve been working out a lot. This off-season I was focused on improving my skills and improving in the little areas. I’ve also been doing a lot of conditioning lately.”

The skills and conditioning will only help her for this upcoming season at WHS.

“For the season, I’m just excited to have the opportunity to play and hope we can make the most out of it.”