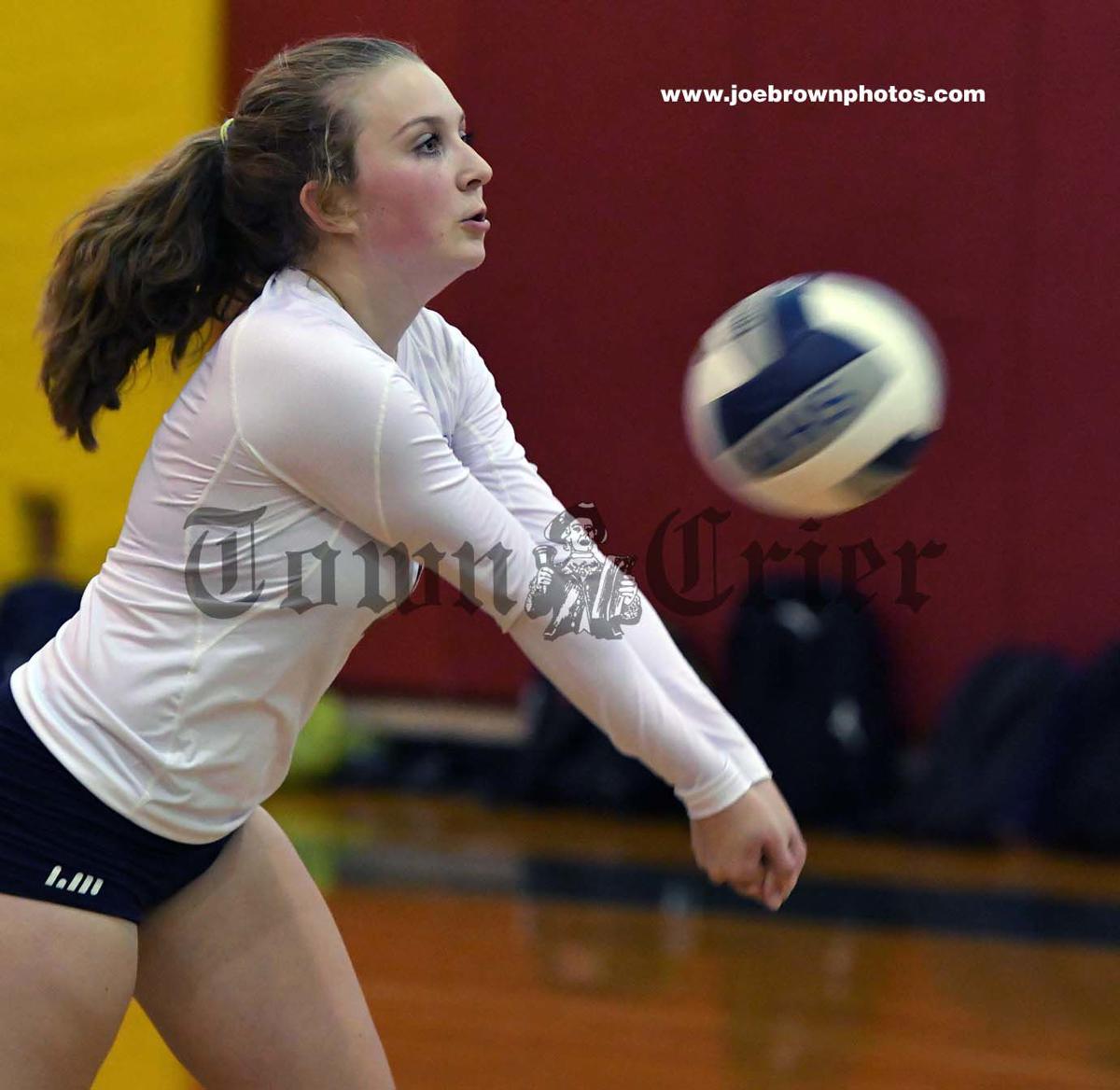 Anna Rideout sets up a volley to one of her teammates during an earlier season WHS Volleyball match.     (photo by JoeBrownphotos.com). 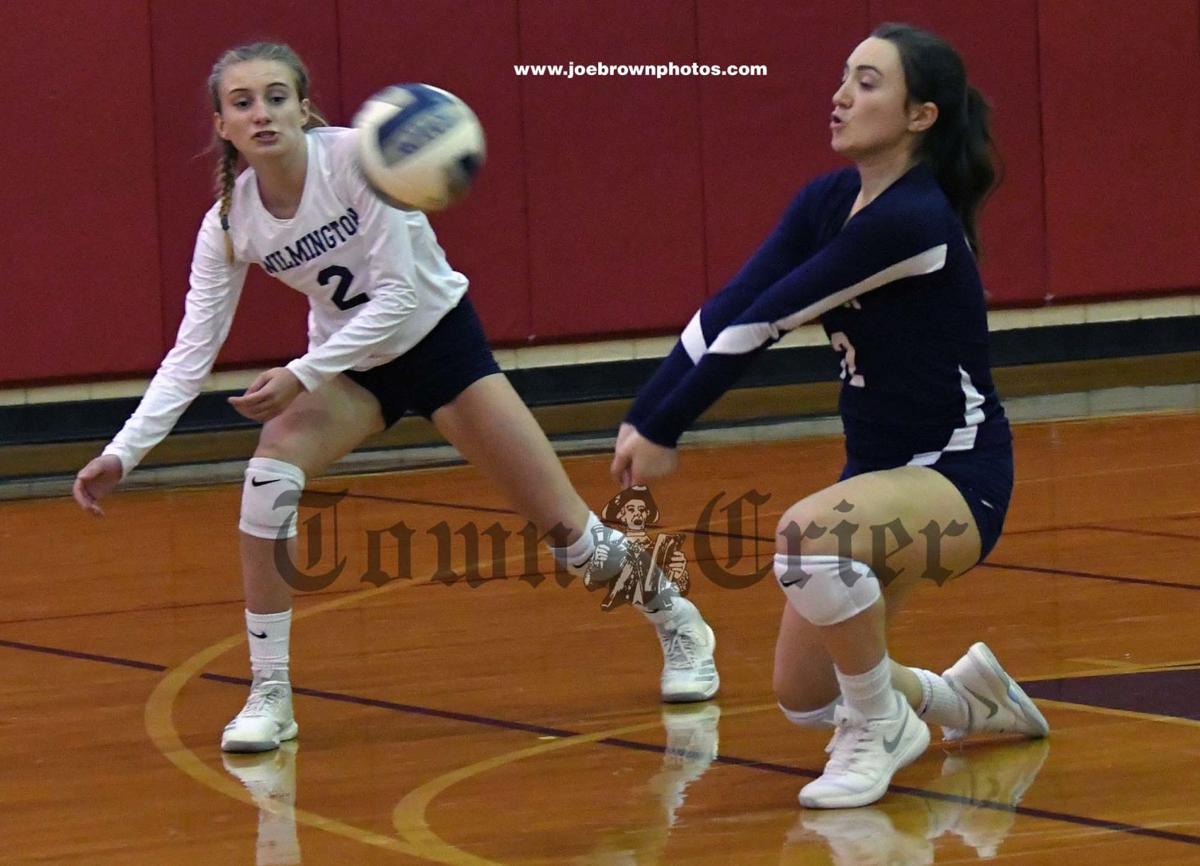 Khrystyna Fedynyak, left, and Raegan Sweeney work together to get the ball back over the net during an earlier season WHS Volleyball match.     (photo by JoeBrownphotos.com).

Anna Rideout sets up a volley to one of her teammates during an earlier season WHS Volleyball match.     (photo by JoeBrownphotos.com).

Khrystyna Fedynyak, left, and Raegan Sweeney work together to get the ball back over the net during an earlier season WHS Volleyball match.     (photo by JoeBrownphotos.com).

WILMINGTON — The Wilmington High girls’ volleyball team has faced the early-season iron of Middlesex League Liberty, now it is time to see how the Wildcats fare against their rivals in Middlesex League Freedom.

Wilmington had a non-league match scheduled for Monday at Cambridge Rindge & Latin, but the referees did not show due to a mixup, so the teams scrimmaged instead. They hope to reschedule the match in October.

The Wildcats, who are now 1-3 overall, were coming off a tough loss to Winchester, 3-0, on Thursday, rounding out the team’s initial foray into Middlesex League Liberty.

What Wilmington coach Bruce Shainwald found encouraging about the away match was how his players reacted after losing the first set decisively, 25-11.

“While a loss is always difficult to take, there are some losses that are better than others,” he said. “This was one of the better ones. In the second set, the team learned that they can play and they can compete against a team like Winchester.”

Not only did Wilmington avoid quickly falling behind, it kept pace with the highly-talented Sachems and took the lead at various points in the set. Winchester did eventually come out on top, 25-19, but Shainwald liked what he saw.

“They came away from the first set realizing that they let themselves get psyched out before they even stepped onto the court,” said Shainwald. “They went into the second set determined to show that they could compete with this team. The girls did what they set out to do in the second set. They competed.”

Despite having the lead at times in that second set, the Wildcats gave up a run of points to drop the second set, and were not as fired up in the third set, which they dropped, 25-13.

“Overall, this was a good outing for Wilmington,” said Shainwald. “It provides us with something to build on as we prepare to take on some of our Freedom division rivals in the next few weeks.”

The Wildcats started the week with a match against Reading, at Wilmington Middle School. This after getting their first win of the season, the day before, against Somerville.

Wilmington brought momentum into the match from that initial victory, which helped the Wildcats play significantly better than they did in their season-opener against another Liberty team, Belmont.

The team served at a solid 84 percent, led by senior co-captain, Savannah Andersen, who served at 93 percent, and sophomore Haeleigh Wilson, who was a perfect 100 percent.

Wilmington had 16 kills in the match, led by Maeve Cadogan, Andersen and freshman Madelyn McCarron.

“Despite the fact that we lost, this was not a bad match for our Wildcats,” said Shainwald. “In each set, Reading got out to a substantial lead, only to have Wilmington fight back to within a point or two.”

There were points where the Wildcats were able to take the lead. Unfortunately, Wilmington was unable to sustain the rallies long enough to gain the victory.

“The girls came ready to fight for every point,” said Shainwald. “However, they gave up too many runs of serves to Reading. If they can sustain this level of resilience, it will pay off later in the season.”

Wilmington was back on the road on Wednesday at Burlington with results not known as of presstime. Then on Friday (5:15 p.m.) the Wildcats visit Charbonneau Field House to take on Wakefield. This coming Wednesday, Wilmington visits Stoneham as its five-game road trip continues.