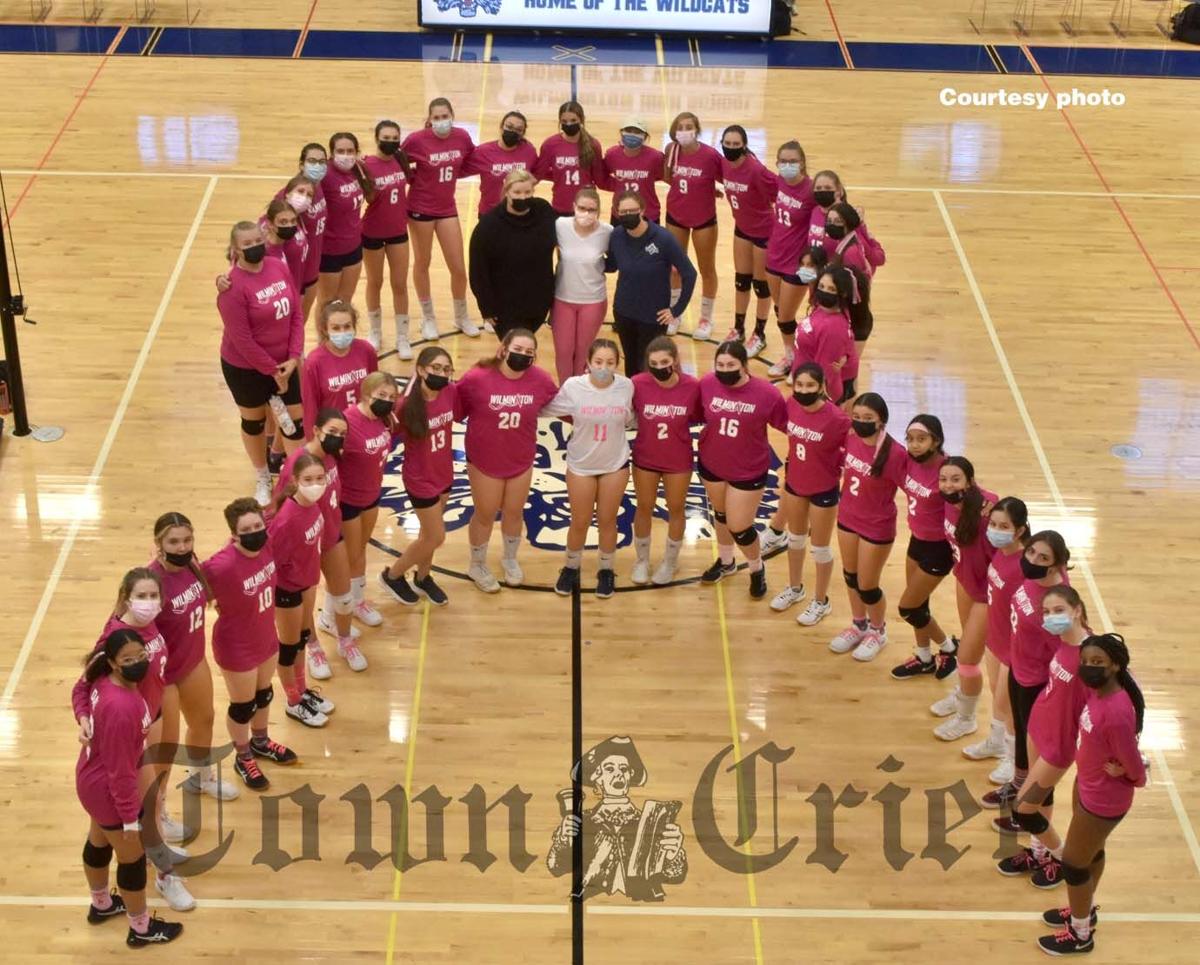 Back on Tuesday, October 19th, the WHS Volleyball team held their annual ‘Dig Pink’ fundraiser, in which the three teams, Freshmen, JV and Varsity, raised a combined $1,600 with thanks to their parents. (courtesy photo). 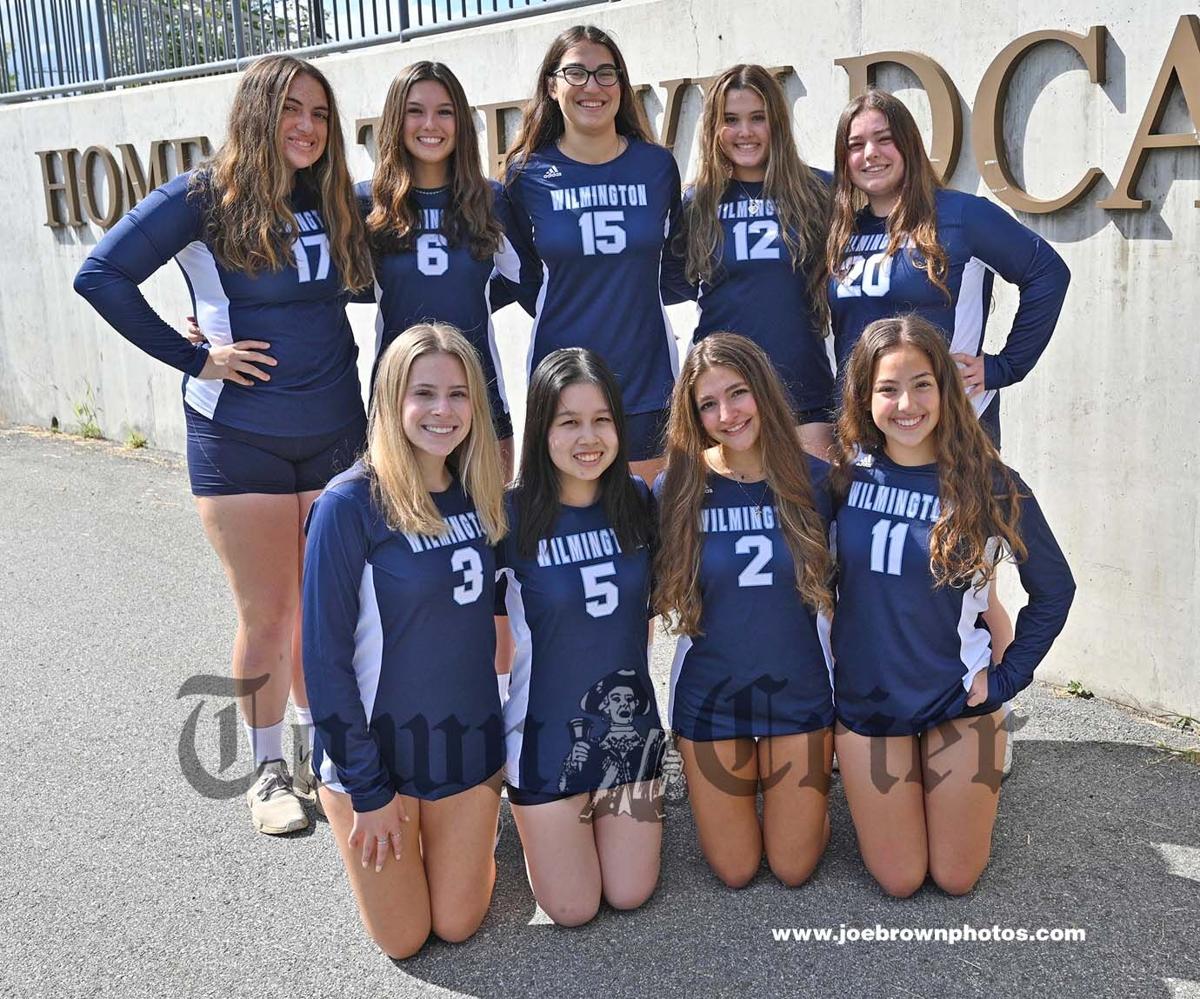 Back on Tuesday, October 19th, the WHS Volleyball team held their annual ‘Dig Pink’ fundraiser, in which the three teams, Freshmen, JV and Varsity, raised a combined $1,600 with thanks to their parents. (courtesy photo).

STONEHAM – Before the season started, the ultimate goal for the Wilmington High School Volleyball team was to qualify for the state tournament for the first time since 2004.

That goal didn't seem possible early on as the 'Cats dropped their first six matches and after losing to Burlington back on October 14th, they stood at 2-12.

Since then the team has split two matches, losing to Wakefield back on October 19th during the annual Dig Pink Fundraising game, and then topping Stoneham, 3-1, at their place last Thursday.

With a 3-13 record, the Wildcats have three matches left with Melrose, Watertown and Tewksbury on Wednesday, Thursday and Friday and one, possibly two wins will most likely get the team into the inaugural season of the statewide tournament, based on a power rankings system.

On Monday morning, the MIAA released its latest rankings, and Wilmington is ranked No. 21 in Division 3. The top 32 teams make it, as well as those who finish .500 or better and are not ranked.

"After we got our tenth loss, the girls were under the impression that they were out of the state tournament," said Katie Cosgrove, who is the interim coach this season with Lauren Donoghue out on maternity leave. "We then talked to them and explained to them about the statewide format and told them it would be a good thing if we could qualify that way. I think it can light a fire under them and get them going, so they push, to try to stay in it.

“Once we told them that, I think it's helped turn things on for them, knowing that making the tournament wasn't completely out of the questions. Especially having nine seniors, they really do want to have a chance to qualify and compete in the tournament.

"We also moved down to D3 and won't face all of those strong teams from the Middlesex League so I think that will be good for us, should we qualify. If we can make it, and the girls continue to work hard, it could be a good boost for them, especially next year when Lauren comes back (to coach)."

Wilmington was able to edge up a spot or two because of the 3-1 win over Stoneham.

"Stoneham was much improved and this was tougher than the first time we played them," said Cosgrove. "We just really needed to stay focused and disciplined, and just play our game because Stoneham is real scrappy. They're not going to let balls hit the floor. They don't necessarily do the pass-set-hit, but they do keep everything off the floor and they did have some pretty good points against us."

In that win, the 'Cats received some fine work from a number of players, including Gabrielle Kulevich, who was recently brought up from JV, and Paige Lohrman, who continues to play more and more after sitting out several weeks with a concussion.

"Gabby has played real well between the Wakefield and Stoneham games. She has really stepped up. She started the season with the JV team and we brought her up when we had some injuries and she's been in-and-out of the line-up and she's been super strong for us and has really come a long way for us the last few weeks," said Cosgrove. "She is super confident on the court, especially with her serving. That has improved so much and she has even gotten a few aces for us.

“She's playing defense right now and that's so important because we really needed someone to step up, so she's been playing the right side (of the back row). She's actually a setter but we needed some more defensive help, so that's where she has stepped in.

"Our typical players are always playing well so we got strong performances from Maddie (McCarron), Alyssa (Fricia), Haeleigh (Wilson) and I thought Paige Lohrman, who was out a while earlier in the season for a few weeks, she came back and has been huge. She's not a super powerful hitter, but she has really learned how to use her skills, how to place the ball strategically on the floor and that's been so helpful to us."

Cosgrove is hoping that Wilmington can take that momentum with them this week with the three games in three days to close out the regular season. Earlier, Wilmington was swept by Melrose and Tewksbury, and also defeated Watertown.

“I was watching some film from the Melrose game and I don't think anyone is unbeatable. Melrose is a super disciplined team, and they play smart, but if we can find some of their weaknesses and use those to try to find ways to score, and to stop some of their strong hitters, I think it could be a good game.

"We beat Watertown earlier in the season so I'm hoping that can be a win for us. Then we'll have Tewksbury and we lost 3-0, on three very close sets and it was the first game of the season. They have twins (Katie and Madison) Cueva and their libero (Carrina Barron) is phenomenal, so if we can keep the ball away from those three, and try to control the twins. The Cueva twins played for me over the club season and were on my team so I know their game so I'm trying to use that to hopefully help us on our end. We are facing them in our first and last games of the (regular season) so hoping this time it's a different outcome.

“Our girls have played together now, are used to each other and I think they look so much better now than they did in that first match and even halfway through the season. They are really working hard. We're hoping to at least get two-out-of-three from this week."

Last Tuesday, the Wildcats held their annual Dig Pink Fundraising event and the entire program raised $1,600 as part of the Side-Out Foundation, "which has raised more than $15 million dollars for metastatic breast cancer clinical trials and created a community of advocates more than 9,000 teams strong."

"Our parents were super helpful. They had a bake sale, different raffles, some donations and then some of the girls invited some people who have had breast cancer to the game and honored them before the game, and gave them flowers. We raised $1,600. I know the program does this every year and the parents and the students are involved from all three levels so that was really good.”

In last week's edition, it was mentioned that the WHS Volleyball program honored its eight seniors during Senior Night, however, there were nine as Emily McHugh was failed to be mentioned as part of the current senior group. We apologize for the mistake.