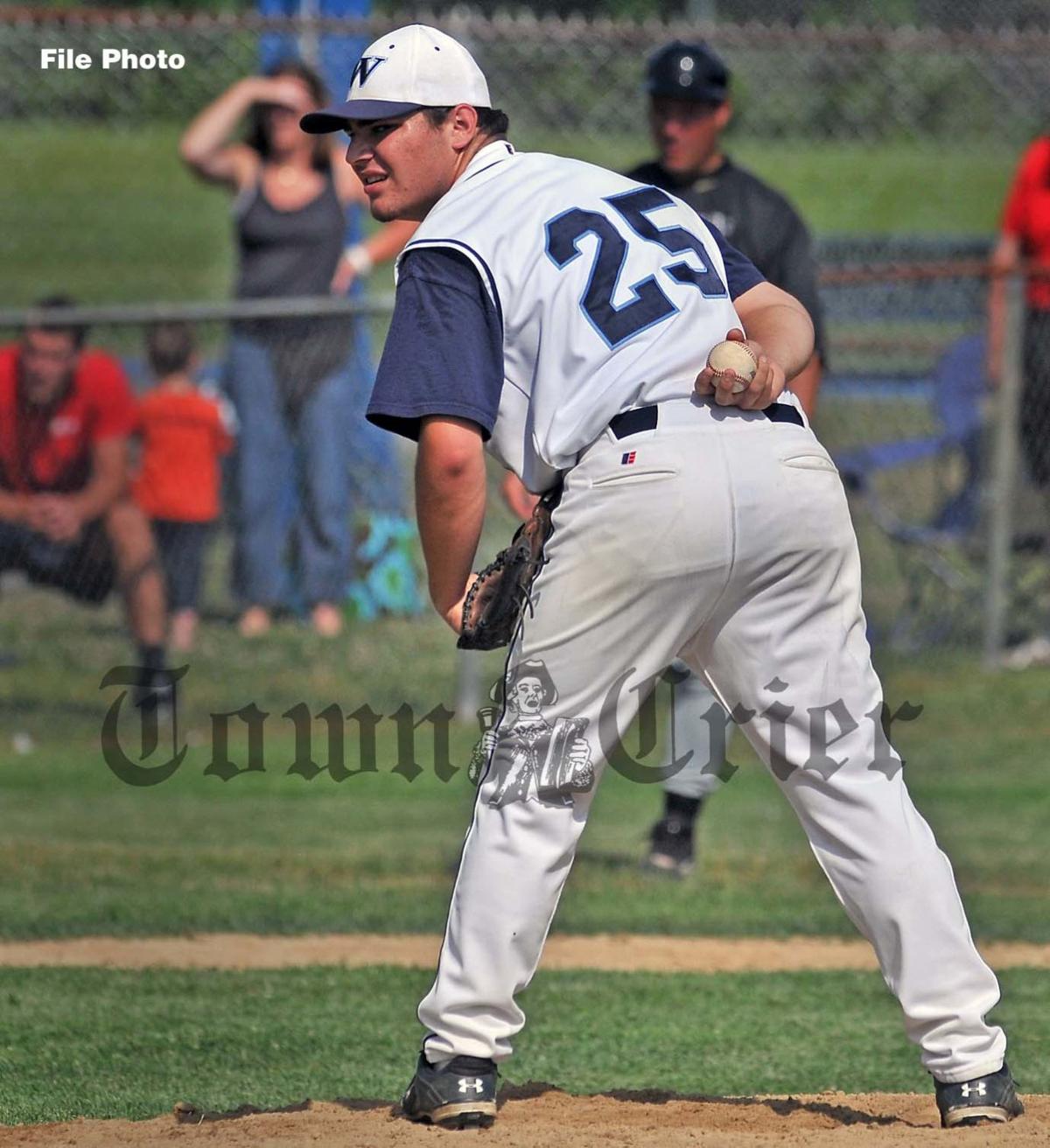 Nick Boutoures had a terrific career pitching at both WHS and then at UMass-Lowell. He is one of the three pitchers we have chosen to the First Team of our All-Decade WHS Baseball team. (file photo). 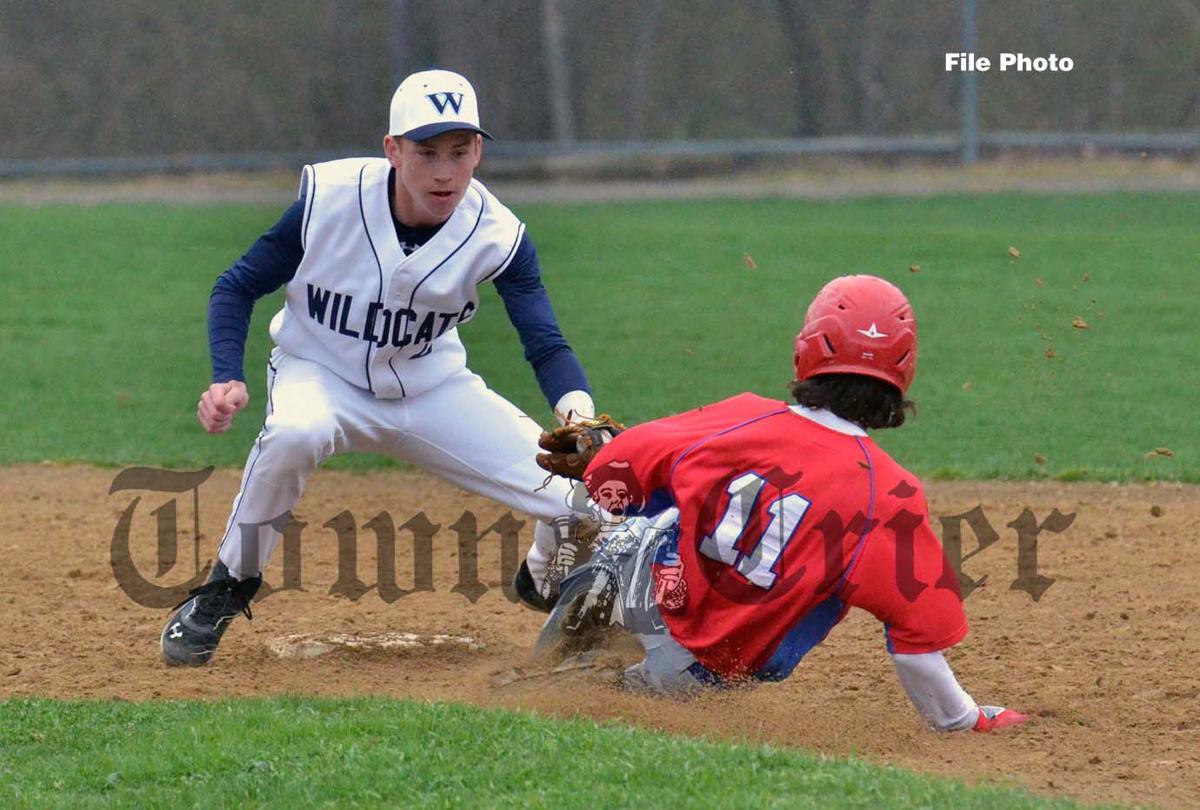 Former Town Crier Male Athlete of the Year Brian Cavanaugh is the choice for the WHS Baseball team’s best second baseman of the decade. (file photo). 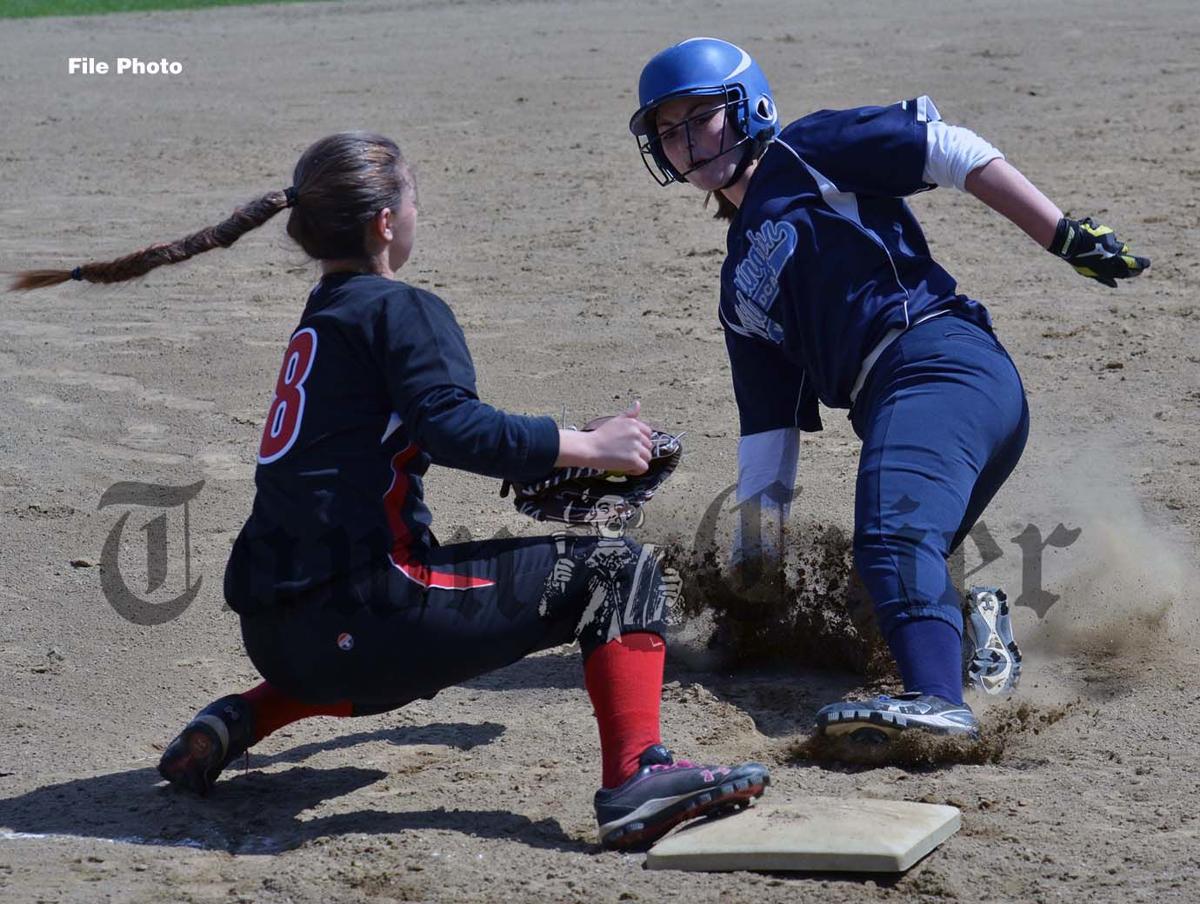 Antonia Kieran, shown being tagged out at third, is a member of the Town Crier’s WHS All-Decade Softball team. (file photo). 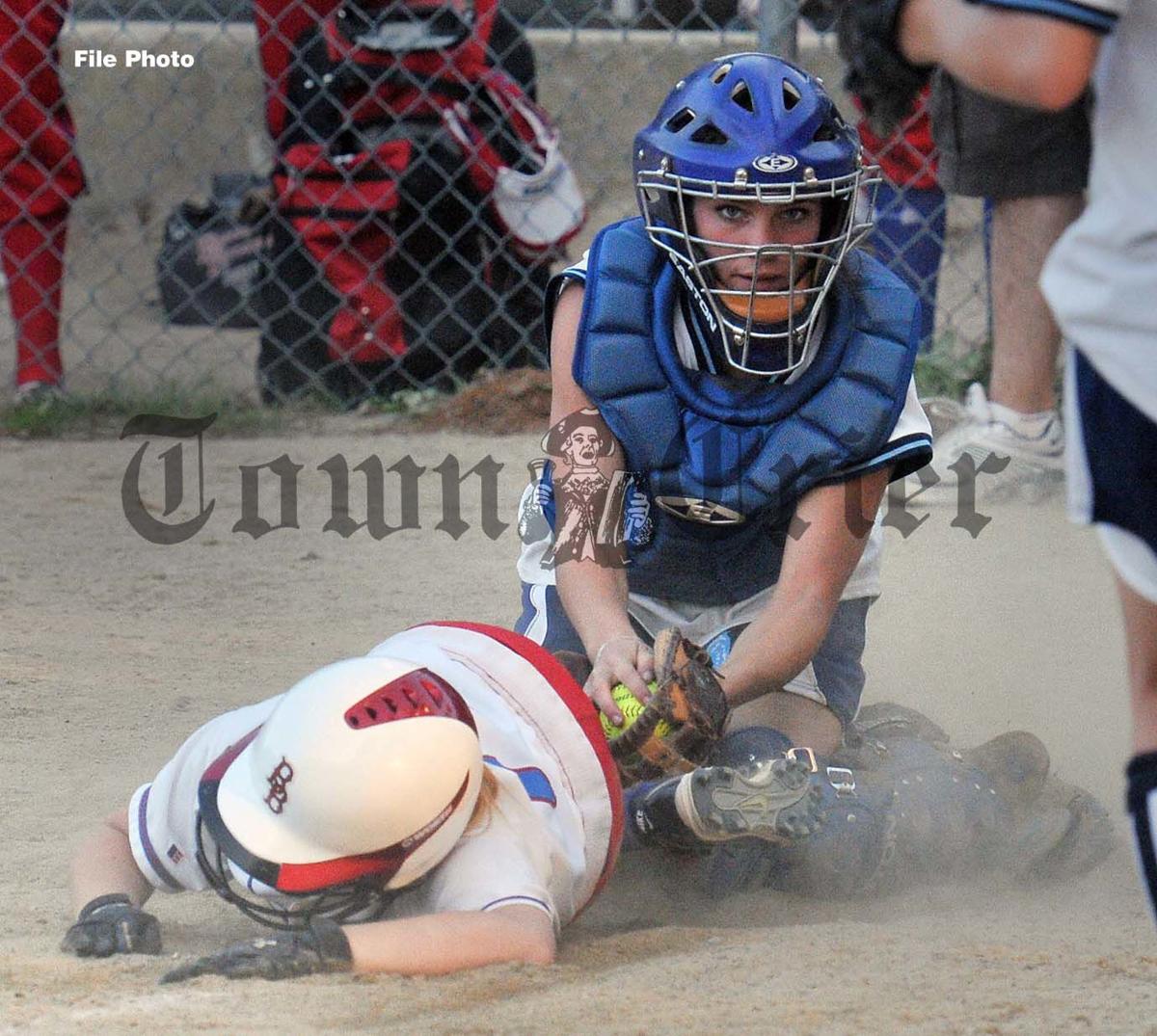 Brittney McLaughlin, applying a tag on a Tewksbury base runner, is a member of the Town Crier’s WHS All-Decade Softball team. (file photo).

Nick Boutoures had a terrific career pitching at both WHS and then at UMass-Lowell. He is one of the three pitchers we have chosen to the First Team of our All-Decade WHS Baseball team. (file photo).

Former Town Crier Male Athlete of the Year Brian Cavanaugh is the choice for the WHS Baseball team’s best second baseman of the decade. (file photo).

Antonia Kieran, shown being tagged out at third, is a member of the Town Crier’s WHS All-Decade Softball team. (file photo).

Brittney McLaughlin, applying a tag on a Tewksbury base runner, is a member of the Town Crier’s WHS All-Decade Softball team. (file photo).

WILMINGTON – It was certainly a successful decade – especially in the regular season – for the Wilmington High School Baseball team. The Wildcats won 114 games, captured three league titles and advanced to the state tournament in nine of the ten years.

During the decade, the 'Cats finished 2-9 in the post-season, beating Winchester in 2010 and Arlington in 2014, but were defeated by Masconomet twice, Belmont, Lynn Classical, Belmont, Reading and Burlington all in Division 2 North Sectional tournament play, before being shifted to D3 in 2018 and '19 and the 'Cats were eliminated by Bedford and Dracut.

Head Coach Aldo Caira was behind the bench for the entire decade finishing at 114-97.

As for the All-Decade Team, by far this was the hardest team to select, but between All-Conference, All-Star, Lowell Sun All-Star teams, statistics and my own eyes, I came up with a team that I think would be extremely difficult to beat on any given day.

P: Jackson Gillis — One of the most coveted high school pitchers most recently in the state, Gillis won 16 games during his career and was named to All-Scholastic and All-State Teams. After pitching three years at Vanderbilt University, he is currently a minor league pitcher in the Milwaukee Brewers organization.

P: Danny Gracia — In 2018, he had a 1.61 ERA, on top of batting .482 on the season. A four-year starter, he was terrific as a pitcher/shortstop/hitter. He is at Franklin Pierce, enjoying a fine collegiate career.

P: Nick Boutoures — Only one year counts for him, but certainly a dominating figure on the mound finishing 4-1 with 49 strikeouts in 38.1 innings. Boutoures went on to be a closer for the UMass-Lowell program, having great success.

C: Dalton Rolli — Rolli makes the baseball team after previously making the ice hockey team. He also played some outfield, but behind the plate he had a strong arm and he could certainly swing the stick, including a .461 average during the 2012 season.

1B: Cole Peffer — Another athlete who previously made our hoop team, Peffer usually batted clean-up and cleaned up the traffic on the base paths, knocking in his share of teammates, while also supplying solid defense.

2B: Brian Cavanaugh — A former Town Crier Male Athlete of the Year, Cavanaugh batted over .300, had deceptive speed on the base paths and was also very solid with the glove.

3B: Carl Beatrice — When you're a sportswriter for 27 years, there's times when you look back and wish you had an opportunity to write a feature story on certain athletes during a magical season and Beatrice was one of them. In 2018, he batted .427 with 23 RBI and also was 2-1 on the mound.

SS: Vinny Scifo — The third athlete on this team to make it previously with another – hoop – Scifo left WHS and played four years at Division 1 UMass-Amherst, playing at the same spot as Billerica's Gary DiSarcina. I have used that line before and I think it's pretty awesome.

OF: Graham Smith — In terms of a CF, he's arguably the best defensive one I've seen in a Wildcat uniform between the ground he covers, speed and of course his arm. He is also a .341 career hitter. Like his pal Gracia, Graham is now playing at Franklin Pierce.

OF: Bailey Smith — In one season of 2019, Bailey stole 35 bases, which ranks second all-time in the program throughout the entire decade – second only to his brother Graham, who had 43. He also had 28 hits and batted .412! Hard to argue the one season isn't all-decade status, especially since he dominated so many offensive categories.

OF: Matt Rideout — Extremely underrated, Rideout was an on-base machine with 66 hits/walks in 154 plate appearances, while also swiped 21 bases.

DH: Jamie Hill – See Carl Beatrice. Missed story aside, Hill was a beast at the plate and could hit laser beams into the gaps and out of the parks. He would certainly bat clean-up for me in this stacked line-up.

Despite three consecutive years of eight wins and not qualifying for the state tournament, the WHS Softball team certainly had a productive decade finishing 30 games over the .500 mark at 119-89.

The Wildcats qualified for the tournament seven times, finished 2-7 in those games and also enjoyed a league title to begin the decade in 2010. Wilmington picked up tournament wins over Swampscott in 2010 and Bedford in 2017, but were eliminated by North Reading in '11, Tewksbury in '12, Arlington in '15, Gloucester in '16, Swampscott in '17, Dracut in a classic game in '18 and then Essex Tech in '19.

P: Chelsie Babcock – In 2010, Babcock finished the season with a 14-1 record and a 1.91 ERA, which included tossing six shut outs, one no-hitter and a pair of two hitters. She didn't dominate batters, but her speciality was location and having a great mind for the game.

P: Ally Moran – She took the hill the last four years, including '19 where she finished with 14 victories, 205 strikeouts, a 2.00 ERA and five shut outs. She finished with a batting average of .305. She was slated to begin her collegiate career at Framingham State University this spring.

C: Brittney McLaughlin – This program had two absolute phenomenal catchers throughout the decade and McLaughlin, a former Town Crier Athlete of the Year, gets the nod at this spot mainly with her defense. In four years, she had two passed balls and threw out 90 percent of would-be base stealers.

At the plate, she batted .431 during her senior year with three home runs. She was a three-time league all-star.

1B: Antonia Kieran – Just a real solid, consistent player both with the bat and glove. She improved drastically over her career and is now playing at Lesley College.

2B: Dana Goulet – She mostly played shortstop, especially during her latter years, but had a handful of games at second base, so therefore we make an exception here and slide her over. At the plate, during her senior year, she was dynamite with the bunt and getting on base. She is currently playing soccer at Bentley University.

3B: Jenn Dovidio – She came up as a pitcher and still toed the rubber frequently before settling in to third base. She was basically an impossible out, always on base and improved dramatically with the glove.

SS: Emily Crannell – Along with the choice at DH, Crannell is probably one of the top power hitters the program has had over recent memory. She was a two-sport star, who also made our Basketball All-Decade team. She played four years of softball at St. Anselm.

OF: Cassie Grasso – Looking back at previous articles, it seemed like all of them said the same thing – Grasso had three hits, two runs, two stolen bases and led off rallies by getting on base. She is also making her second appearance on an All-Decade team, with indoor track as the other.

OF: Makayla Donahue – She was a two-year captain, who mostly played center and right field, but was known for her bat. She certainly could hit and was a RBI machine.

OF: Taylor Hanley – She played her first two seasons in the outfield, before moving to the hot corner. She was a key part in the team's 17-win season and league title in 2010 and was just a steady ballplayer. She went on to have a great career at Worcester State.

DH: Shannon Horgan – Horgan is the other 'phenomenal catcher' that this program has had, and while McLaughlin had the defensive stats, Horgan had the offensive stats, thus shifting to DH. In 2017, she batted .456 with 5 home runs, 21 RBI and 11 stolen bases.