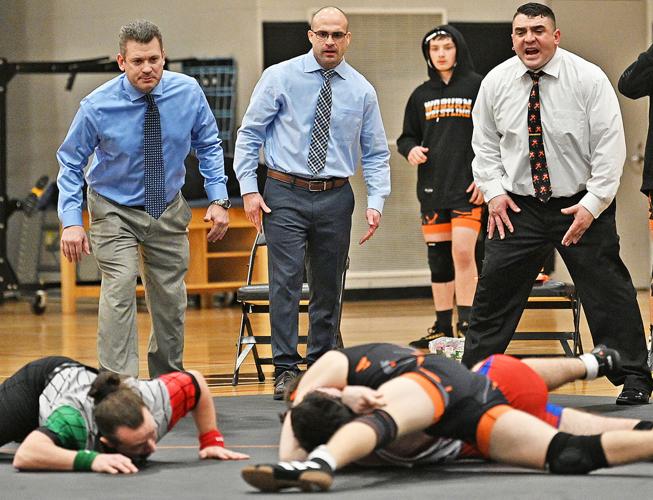 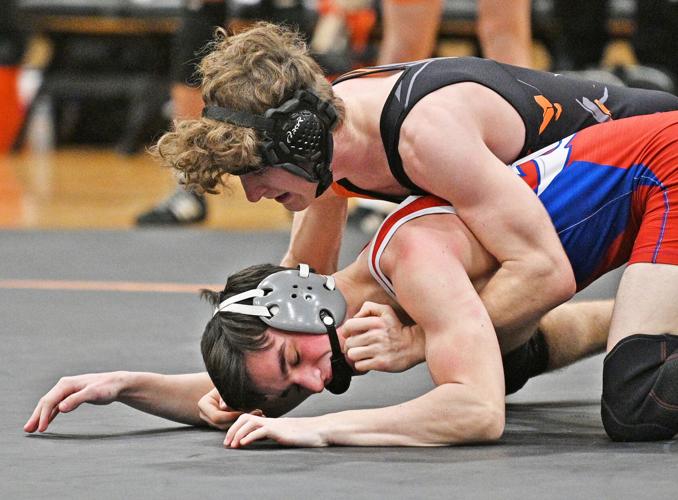 Woburn's Sean Hall (top) is in control of his match against Burlington’s Alex McGillvray at 138 pounds. Hall won by fall as the Tanners defeated the Red Devils on the mat, 54-25. 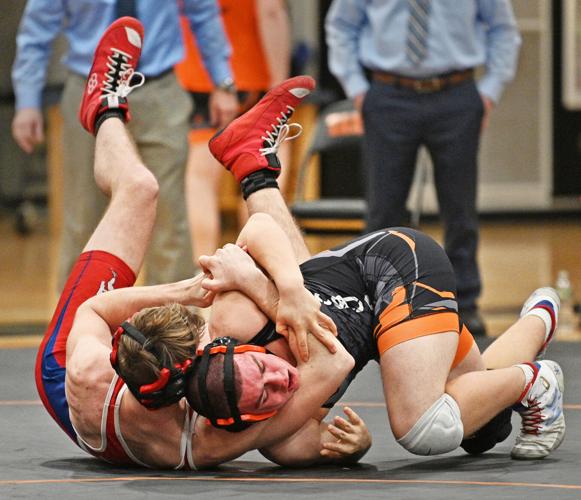 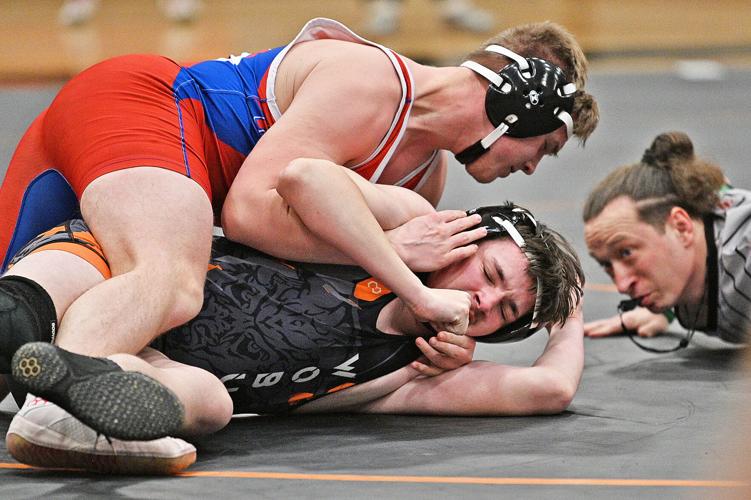 Woburn's Sean Hall (top) is in control of his match against Burlington’s Alex McGillvray at 138 pounds. Hall won by fall as the Tanners defeated the Red Devils on the mat, 54-25.

WOBURN — Just a fantastic night for the Woburn High wrestling team as it beat rival Burlington for the first time in many years, both on the scoresheet and on the mat, Wednesday night at Torrice Gym.

Three consecutive forfeits in the early matches helped propel the Tanners, but good wrestling in the matches that were contested were the key in the 54-25 win. The Red Devils are definitely in rebuild mode with a lot of new faces in the lineup, and their challenging schedule makes it all the more difficult

The Tanners began the evening celebrating Senior Night, honoring captains Joe Mahon, Sean Hall and Edward Sallese, before the match. The Red Devils forfeited at Mahon's weight class (120), but Hall and Sallese were able to pin their opponents at 138 and 285, respectively.

"I'm just happy for the seniors, for this win tonight," said Woburn coach Mike Parziale. "They work hard and are good leaders, some of the best leaders I have ever had, honestly."

Parziale also earned his 114th career coaching victory with this win, eclipsing the record set by Father John McLaughlin back in the 1980s.

One of the most exciting matches of the night came in the opener at the 106 weight class, where Woburn's Maddie Campbell challenged Burlington's Molly Moroney.

Campbell took a 6-2 lead after the first period, with three takedowns, while Moroney had two escapes. Moroney rallied in the second period with two takedowns to one Campbell escape, making it 7-6 going into the third round.

Moroney chose the down position and escaped to tie the match 30 seconds into the third round. She then earned a takedown to take a 9-7 lead. Campbell came close to escaping with about 30 seconds left and she picked up a point when Moroney was called for an illegal hold with 17 seconds left, making the match score 9-8.

Campbell was down on the restart and she made one valiant last try before Moroney took her back down to the mat to win the match, as time ran out.

"Maggie is a first-year wrestler but she's a tough kid," said Parziale, "She's super-athletic and is going to get better and better."

Woburn got on the scoreboard at 113 with a first round pin from Aedyn Mennell, and then Burlington had no one to wrestle in the next three weight classes, so Woburn took the forfeits and a 24-3 lead.

"There were some good matches, we wrestled tough," said Burlington coach Paul Shvartsman. "We're so young that up to 170 - it's tough to find wins in there. Our older guys wrestled well, we put up a fight, but down low we're so brutal."

The Tanners kept rolling when the matches on the mat resumed. Sean Hall wrestled for Woburn at 138 and took an early 2-0 lead with a takedown, and then a 4-0 lead before Burlington's Alex McGillvray reversed him to a near fall. Hall, on his back, struggling to not get pinned, was literally saved by the bell as McGillvray took a 5-4 lead into the second period. Hall got the first opportunity to pin in the second and he got the job done at 2:47.

The Red Devils actually have two females in the starting lineup. Roos Grosbeek more than held her own in the first round of her match at 145, turning over Alex Lauria onto his back briefly after he put her on her back in the first place. It was 6-5 going into the second period, and Grosbeek was in it until Lauria caught her with a single-leg takedown to a near-fall. Lauria eventually got the pin at 3:50.

"It's a new world," said Shvartsman, of two females in the Burlington starting lineup. "Molly is a second generation wrestler for us, and we've had her for three years. She puts up a good fight. Roos is a Czech exchange student. She came out as a senior and has given us a couple of good months."

Meanwhile the team points were piling up for the Tanners, and they clinched the match win when Thomas Kineavy won by fall in 37 seconds at 152, making it 42-3.

After another Woburn win by fall from Cole MacPhee at 160, Burlington's Jaden Alford finally put an end to the 48-0 run with a pin at 170.

This ignited a 22-0 Red Devil run that carried right through the second to last bout on the night. Marcus Tucci got the pin at 182, late in the second round. Ahmad Kiswani earned a major decision at 195, and Tyler Vadnais got the win by fall at 220.

Sallese needed just 25 seconds to put the finishing touches on the 54-25 victory with a win by fall in the heavyweight match.

"I loved how we didn't have any forfeits," said Parziale, whose team has been plagued with them in recent years. "We have guys back who are now healthy and we are moving forward."

McLaughlin holds a special place in Parziale's heart, as he was an important father figure and mentor to Parziale when he started out in the sport.

"Father John reminded me that if I won tonight, I would have 114, which surpasses his 113," said Parziale. "He changed my life because he was like a father to me, growing up. He's the reason why I'm here coaching. It means a lot for that reason, because he was so influential in my life, and a lot of things I do in coaching comes from him."

Father McLaughlin's influence began with Parziale, as a wrestler, where the latter became Woburn High's best ever, with multiple Lowell Holiday, state and New England titles.

"He had a lot to do with my wrestling," said Parziale. "He believed in me when a lot of people didn't. I owe a lot to Father John. I talked to him before the match tonight and I said how fitting would it be for the student to overtake the coach. I'm glad it was me because I wouldn't want any other coach to do it."

The annual tournament, held at Torrice Gym on Saturday, has been a consistent success through the years, thanks to Woburn High wrestling, but the Tanners have not made much noise in it in recent years.

This weekend Woburn took a step forward back into prominence, placing five wrestlers in the top six and finishing as a team in the top 10.

Mahon pinned his first two opponents at 120 to advance to the semifinals, where he lost by fall to Andover's Jason Ballou. In the consolation bracket, Mahon defeated St. John's Prep's Brandon Goss by major decision before pinning Tewksbury's Benjamin Barrasso in the final to take third place.

Ferreira at 132 also pinned his first two opponents to reach the semifinals. He then lost to Putnam's Nathaniel Coto to drop down to the consolation bracket. In the semifinals, Ferreira won by fall over Brendan Delaney of Braintree, before taking third when a Belmont wrestler forfeited in the consolation final.

Mennell took fifth at 113. Mennell lost his first match in the championship bracket, but then came back to pin his next two opponents in the consolation bracket. He lost in the consolation semifinals and captured fifth place when his opponent forfeited.

It was a similar story for Servellon at 182. He pinned his first two opponents to reach the semifinals before losing by fall to Bridgewater-Raynham's Chris Hogg. Servellon also lost in the consolation semifinals, by major decision, before taking fifth when his opponent from Agawam forfeited.

Sallese closed out the tournament with a sixth place finish. He lost his first match in the championship bracket but then won by fall against his next two opponents in the consolation bracket. Sallese lost in the consolation semifinals and then in the 5th/6th match to end up sixth.