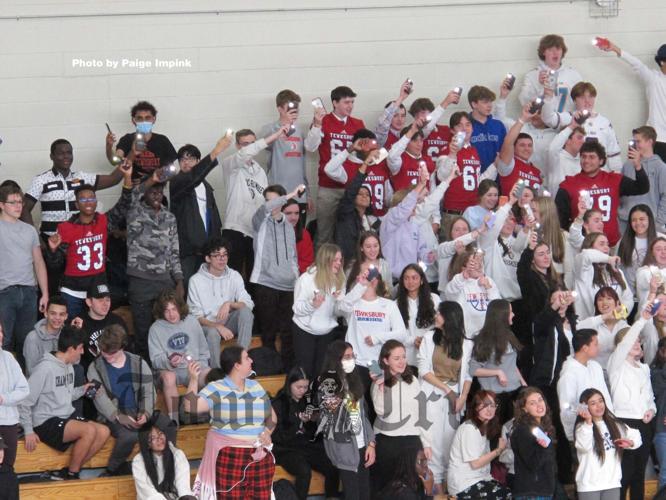 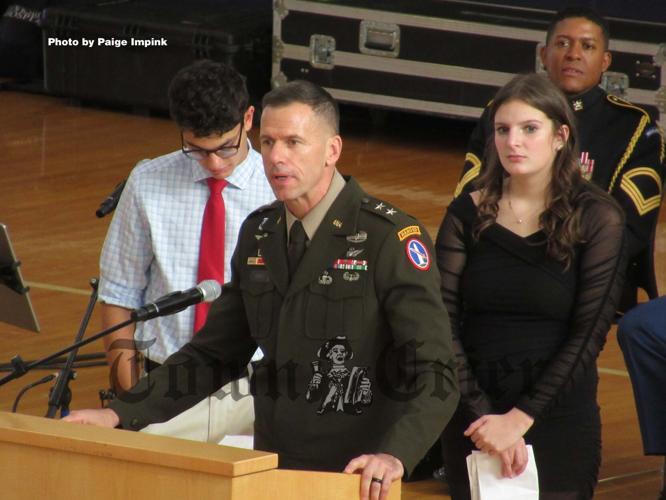 Pepin graduated from Wentworth Institute of Technology with a Ba­chelor of Science in Ar­chitectural Engineer­ing.

Seniors Justin Darrigo and Molly Buczynski were Masters of Cere­mo­nies for the program. The TMHS Concert Band played the star-spangled banner for the all-school assembly in the gymnasium. The Pledge of Al­legiance was led by Rep­resentative David Rob­ertson.

The students and staff watched a demonstration by the U.S. Drill Team, 3d Infantry Regiment, a precision drill platoon that uses bayonet-tipped infantry rifles. The team performs around the country as good will am­bassadors, supporting Ar­my recruiting efforts. This group is part of The Old Guard.

Major General Pepin was introduced by Ayl­ward. Pepin, who comes from a family of service, encouraged the students to be accountable for their actions, treat people with dignity and respect, think beyond the boundaries of themselves, and to associate with people better than they are and to learn from others.

Pepin encouraged students to consider military service as a career and stated there are many options, just as the various service men and women in the assembly were demonstrating. Pe­pin also ex­plained that it is a strategic priority of the Army to recruit talent and that the military recognizes the com­petitive job environment.

MG Pepin thanked the veterans for their service. He then introduced SGT Kamille Torres, Sentinel Tomb Guardian at the Tomb of the Unknown Soldier at Arlington Na­tional Cemetery in Wash­ington, D.C.

SGT Torres shared her journey with the students and the military honors she has achieved.

Senior Brooke Bunyan and junior Cullen Mangan each read their Student Voice of Democracy es­says for the audience. The es­say prompt for this year was “Why is The Veteran Important?” The Voice of Democracy essays are part of a scholarship competition sponsored by the Vet­erans of Foreign Wars.

The assembly ended with the U.S. Army Band “Per­shing’s Own” musical group “Downrange” sing­ing and playing music for the audience. The group performs popular music to support Army men and women through their performances.

Lead singer Bethsaida Ramos belted out Taylor Swift and Katy Perry tunes that the students and veterans enjoyed. At one point, all of the cell phone lights were on in the audience, with students, staff, and veterans swaying back and forth in unison to the music.

The program may be viewed in its entirety on the town of Tewksbury’s YouTube channel.